Gunned Down: Widow Of Gangster Shot Dead By Cops Dies In Gb Driveby 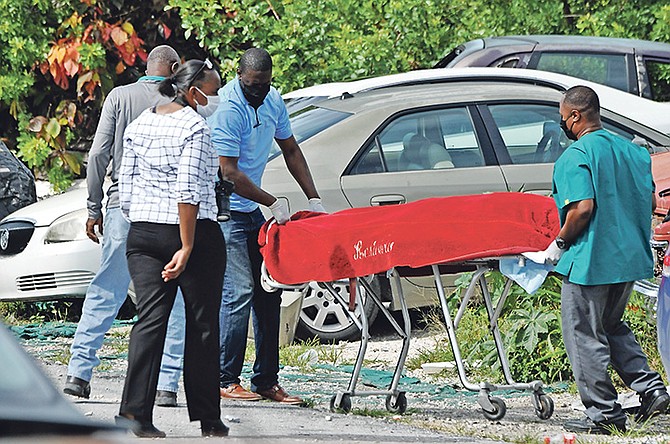 The scene of the fatal shooting in Grand Bahama yesterday. Photo: Vandyke Hepburn

THE wife of a dead alleged gang leader was killed in Freeport yesterday in a shooting that also left a man in hospital with serious injuries.

While her identity was not released by police, sources said she is Kim Smith, wife of Tony Smith, also known as Jamal Penn. Smith was one of three men shot dead last May when police executed a search warrant at a home in Blair in eastern New Providence.

The Tribune understands Smith was expected to play a key role in the coroner’s inquest into the shooting death of her husband.

According to reports, sometime shortly after 3pm yesterday police received reports of gunshots fired in the Limewood Lane area of Grand Bahama. Superintendent Brian Rolle, officer in charge of the island’s CDU, said officers responded and went to Limewood and Oleander Lanes, where they saw a male unconscious, lying on the ground suffering from a gunshot wound to the head.

He said officers also discovered a deceased woman in a blue vehicle. “Reports are that prior to the police arriving, a dark-coloured, grey or silver Honda vehicle drove past and it is believed that persons in that vehicle fired shots, taking the life of a female who was in the vehicle, and the male, who was unconscious and taken by EMS to the hospital,” Supt Rolle said.

The senior police official said the woman was pronounced dead at the scene.

The male victim was transported by ambulance to Rand Memorial Hospital, where he is listed in critical condition. The incident brings the island’s murder count to six for the year, according to The Tribune’s records, and is the 24th nationwide.

Last May, police shot and killed three men in a home off Eastern Road on a Friday morning. At the time, police said the men opened fire at officers who were trying to execute a search warrant.

Tony Smith, said to be the alleged leader of the “Border Boys” gang, was one of the victims. He had been acquitted of several murder charges before his death. Kim Smith and three others were arrested and charged last year with drug possession with intent supply, possession of an unlicensed firearm and possession of ammunition in connection to the Blair incident.

Supt Rolle is appealing to members of the public who have information concerning yesterday’s incident to assist police with their investigation.

Terrible Headine. Reads as if the cops shot the lady....

I agree. The headlines is misleading

That’s no accident. They clearly suspect it was a police hit job, “The Tribune understands Smith was expected to play a key role in the coroner’s inquest into the shooting death of her husband.”

Does anyone doubt the police are capable of these things. This be one seriously corrupt nation you know!

Cops gunned down a widow? You know better Tribune. Stop doing that just to try and sell papers.

More likely than not!

I wish we live in a country where corruption wasn't prevalent. A country that allows the haves and have nots to actually find an economic solution without capitalism. A country that never allows violence.

Please get the children therapy and shower them with love.

Well who is set to benefit from her demise