FACE TO FACE: Anything is possible - the only limit is imagination 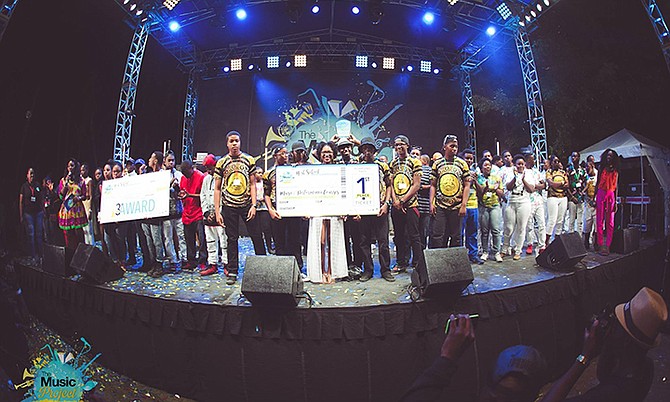 The winners and runners up of The Music Project. The winning school band’s members get a trip and the summer school of a lifetime, while the runners up get cash prizes for the band.

The first time I heard Drew Harmony sing, I was in awe. His voice is smooth and sultry and I was immediately taken back to a time when R&B was in its prime. His buttery yet bold voice made me stop and listen and I have been a fan ever since.

Drew has just released his first new single and it lives up to all I expect from an artist on a mission to take his music worldwide. The song is his first major release, but he is a veteran at stage performance. This multi-talented artist can write, produce and sing and I have seen him in action doing something that means the world to him – passing his skills on to the next generation. He’s determined and passionate and with his first single now hitting the airways, Andrew “Drew Harmony” Gardiner is a name worth remembering.

Drew’s entire family is amazing. They have found the secret to working together successfully. Zamar Group Companies Ltd is a powerhouse which includes the popular Zamar Audio Visual Productions, which is responsible for the staging, rigging, lighting, audio and video production for some of the biggest events held in the country.

Drew and his sister Kay-Andra work with their parents, Andrew Gardiner II and Kay to operate one of the most successful companies in the field. Due to their quality of equipment and professionalism, event producers have found it unnecessary to seek foreign contractors. It’s something Drew takes pride in and it has taught him the value of hard work and that family can, indeed, work together and make a difference.

When Drew was growing up, he was a typical teenage boy engrossed in the world of video games. He also enjoyed watching music videos and by doing so, was bitten by the music bug, and his path became clear.

“I believe it was the moment I was introduced to Michael Jackson and Stevie Wonder that got me started; after watching Michael’s electrifying moves and Stevie’s musical performances, I knew that I wanted to be on stage performing,” Drew said.

“I also grew up in a musical house. From sunrise to sunset there was always music. My dad, who is a sound engineer by profession, took me to work with him. Work at that time was a lot of live concerts where he mixed both Bahamian and international artists. Being around my dad exposed me to multiple of high-level performing musicians. Oddly enough though, it was not until I was in the 11th grade that I became curious about composing my own music. That Christmas, I came across a video of an artist/ producer by the name of Ryan Leslie, and that moment sealed the deal. In a matter of hours watching his videos on YouTube, I knew what I wanted to do. Shortly after, I traded in my video games for a midi keyboard and a music creating software. The rest is history!”

That may be moment when Drew made a commitment to follow the music path for his life, but the way was being carved out long before. His first musical mentor was his late uncle, Pastor Mark Bethel, who was the Praise and Worship Leader at Bahamas Faith Ministries. 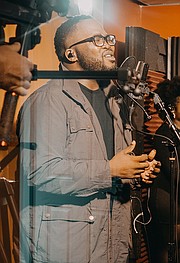 Drew attended Temple Christian School and there, Pastor Mark served as Vice Principal and touched many children’s lives, including mine. Drew says he learned a lot about stage presence and confidence, watching his uncle, who performed at church and school regularly. Drew then transitioned into Kingsway Academy and later graduated from St. Andrew’s International High School. Upon graduating, he attended West Virginia University where he studied Business Management. However, after three years of being frustrated, he knew that music was his true passion. During the fall of his junior year, he auditioned for the world-renowned Berklee College of Music and was accepted. He then transferred there and went on to study performance, music production and engineering.

Drew went to Atlanta for a while, and he had the opportunity to delve deeper into the music industry. He connected with people who inspired his music and his journey including Brian Michael Cox, Kuk Hurell, and Q Parker from 112. Back home, he gained mentors such as Fred Ferguson, Obie Pindling, Isaiah Taylor, Rick Carey, and Zoltan Johnson. He also credits countless hours of learning from “the university of Youtube” with helping him to hone his talent.

Today, Drew is focused and ready to reach the heights of his music aspirations: “My goal is to become a multi-platinum recording, selling and touring artist... along with composing and writing hit records for other artists as well. Later, I would like to venture into acting and producing films.”

“Recently I released my first single, I Cannot Wait, which is available on all major streaming platforms. This song is the first major release for me, but you can find several of my past performances and concerts on my YouTube channel. With the release of I Cannot Wait, I am excited to keep bringing the world impactful music! More music is definitely on the way, along with a new music video, and I am looking forward to sharing it with everyone.”

Drew’s single can be heard on radio stations throughout the country this week. And while he’s celebrating his first release, he’s also relishing in the fact that he contributed to the new hit by Bahamian artist Jayme C, entitled Right There.

“I produced I Cannot Wait by myself and an Atlanta-based producer by the name of MOMBRU, he said. “It is about being inspired by love, but also self-love and the journey of pursuing partnership. Since its release, I have received so many great reviews! I am truly grateful, and excited to see how far this single goes.”

With such lofty aspirations, I asked him how he planned to bead the odds, as there are so many talented Bahamians whose careers in music have yet to take off the way they envision.

“It is difficult being an artist anywhere,” he replied. “However, our country still has a long way to go in regards to the development and sustainability for musicians in our country. The internet, nevertheless, has made things a bit easier. I can upload content to the web and music streaming platforms, and I can share my gift throughout the world; therefore, my only true job and focus is making great music. I know that this journey is much more difficult than the traditional paths. But, I would rather fail at something that I love than be successful doing something I hate waking up to.”

This is a standard that Drew is teaching kids to hold themselves to as well. He serves as the Digital Strategy Manager for Zamar Group and runs a Non-Profit Organization called The Music Project.

Drew started the Music Project over five years ago based on the premise of encouraging youth participation in the arts and the development of the next generation of Bahamian musicians and entertainers. It is a series of music events, workshops, and mentorship opportunities that culminates the student experience in a popular high school pop band competition hosted each year at Botanical Gardens. With thousands of people in attendance, students in grade 10 through 12 compete for the grand prize - an all-expense paid trip and scholarship to study at the world renowned Berklee College of Music for their summer program. Since starting, The Music Project has directly engaged over 300 students in the program and sparked the musical interest of hundreds more. Students obtain scholarships and employment opportunities just by being a part of this program, which is an indication of the impact we are having on student’s lives. Popular Bahamian music artists have availed themselves to The Music Project, providing guidance and mentorship to the students, as well as making music with them. Drew also produces and writes for artists, along with being a full-time artist himself.

“My driving force is to prove to myself that anything is possible once I put my all into something, he told me.

“My Bahamian people, especially my mentees at The Music Project, need an example from their community to show them that it truly is possible and that the only limitation is what the mind can conceive.”

Drew founded his own group, Artist Cave International. Find him on Facebook by: Andrew Drew Harmony Gardiner, and on Instagram as @Drewharmony. His Twitter handle is @IamDrewHarmony, and you can find him on Spotify and Soundcloud by Drew Harmony. Listen to your local music stations and request I Cannot Wait to enjoy a soulful R&B song that Drew hopes will launch his music career.