DIANE PHILLIPS: A bit of common sense and we can unleash at least one economic tiger 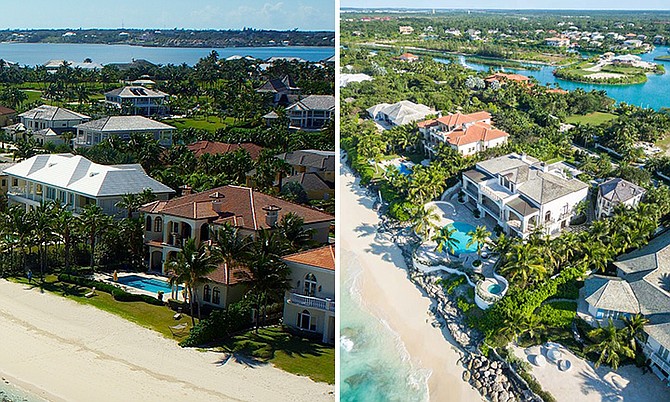 From Exuma to Eleuthera, Paradise Island to Albany, Old Fort Bay and Lyford Cay, it’s a heyday in a hot market that keeps heating up.

This is one of those good news, bad news stories. The difference in this one is the bad news has an easy fix. Here’s how the story begins.

Late September 2019. A good year economically. The world is tooling along without too many wars. In America, headlines are ramping up about the upcoming election as debates weed out the good speakers from the awful and the much-anticipated Mueller - who was to clarify Russian interference in the last election - is already drawing yawns from a bored public.

Then one day there is an inexplicable rise in deaths in Asia. A virus is detected in an outdoor market in Wuhan, China. In short order, it spreads. There’s never been a virus like it so there is no vaccine. No one was expecting it so there are not enough test kits. It’s so contagious that front line workers in hospitals and health facilities are told to wear personal protection gear but since the virus was sprung on the world without warning there aren’t enough PPE’s to go around. The rest of the population was told to wear masks and gloves and wash their hands as if their life depended upon it - because it could.

The virus spreads worldwide. It’s as if there was one gigantic sneeze and everyone caught a cold. And the world’s wealthiest began a search for safety.

In the tiny island nation of The Bahamas where the sun shines year-round, the government closed ranks and borders, announced lockdown and there is what appears to be a protective netting with tight measures in place curbing the spread of germs threatening to rewrite world history. Phones begin to ring, some of them are ringing in empty offices where real estate companies flourished days or weeks before.

The calls and inquiries are coming from everywhere around the world. The Bahamas real estate market is hot. Private islands that have been up for sale for years are attracting new attention. High-end properties that languished on the market are being snatched up. It seems the more remote the residential premise is, the more promise it holds. One agent who had just taken a $23 million listing for a residential estate on a Family Island had not even engaged the marketing plan when the offer came in. From Exuma to Eleuthera, Paradise Island to Albany, Old Fort Bay and Lyford Cay, it’s a heyday in a hot market that keeps heating up.

The Bahamas was seen as safe and for many with money, that’s good as gold. Government coffers could use the Stamp Tax. The economy could use the boost. Even the sale of a modest house, NAR statistics tell us, generates the equivalent of 2.5 jobs.

Good news in a time when unemployment is reaching new highs as businesses remain closed.

The bad news is that nothing can move.

Among the closed doors – real estate offices. Except those, of course, that are violating the lockdown orders. Agents can’t show property. Appraisers can’t appraise. If an offer comes in, and a successful negotiation takes place even sight unseen, it stops there because title search offices are closed.

Bahamas Real Estate Association President Christine Wallace-Whitfield says she’s been lobbying on behalf of more than 700 licenced members to allow agents and brokers to operate. Her case makes plain common sense: When you show a property, it’s usually just you and one other person in a house, maybe a third if a spouse comes along. Plenty of room for social distancing. Even more if it is undeveloped land. Go to a food store and even if there is a six-foot distance at the register, it’s hard to get down an aisle without coming a lot closer to other shoppers. She also points to pending sales, on hold because title searches can’t be completed and law firms can only operate in-house for urgent or court-related matters. Every pending contract is on hold while banks may be adjusting interest rates.

Here’s one suggestion for an easy fix and another to make it even more attractive to a government asking for feedback on how to jumpstart the economy in a manner that is sustainable and nothing is more sustainable than home ownership.

Open the real estate industry with provisions for social distancing and sanitation of offices. Ninety percent of searches start online so office space is the least important component of what could be a welcome boost to get money flowing and keep it circulating. Real estate and development comprise the second or third pillar of the economy, depending on the quarter. If you really want to create a positive impact, provide incentives – stamp tax deferral, property tax exemption for first or second time homeowners on purchases up to $750,000 or seek ideas on incentives that turn the key to unlock a frozen asset.

When Bahamians are eager to buy because interest rates are low and high net worth individuals are seeking a safe refuge and can qualify for the right to live in a coveted place, the next step is as easy a fix as a new welcome mat. This is not an invitation to open the floodgates but a reality check. It takes a mixture of ingredients to make a great soup (or culture). Why snuff out the gas and turn off the heat when we created the recipe everyone wants?

Jayden Perez has his own foundation called From the Bottom of My Heart.

Jayden Perez is 10 years old. He’s been paying it forward ever since he turned eight. That was the year his mother’s boss gave them tickets to see a Giants game, Jayden’s favourite team, and he realised how giving something to someone who was not expecting anything can make the world a better place.

Jayden, who lives in New Jersey, has his own Facebook page, his own following, his own foundation, called From the Bottom of My heart. He was on the Kelly Clarkson Show the other day discussing the work of his foundation that started with the giving away of Easter baskets two years ago in his community to raising funds for smart devices and providing masks during the COVID-19 pandemic.

Sophisticated and articulate well beyond his years with a way that inspires anyone who hears him, Jayden earns money himself and respect from others which means he is often the recipient of strangers’ largesse which he then distributes to where he believes the need is greatest.

A donor recently gave Jayden’s foundation $10,000 worth of toys.

Kelly Clarkson asked what he did with them and he said, “I shipped them to The Bahamas and Puerto Rico to bring smiles to the children who suffered through the hurricane.”

Thank you, Jayden, from the bottom of our hearts.

what will we do when the last piece of land is sold?

I don't mind private lands - esp those already characterized as high end and already existing - being sold and changing hands. Each time that happens we not only earn a tax on the sale, but we get someone who comes and lives here for a time a participates in the economy - instead of a deadbeat owner who simply has a "key holder" here to an empty unused property. We just need to be careful that China don't buy up everything here like they are doing in Africa and South America and Canada.

Where i have a problem is when Crown Land is given/leased to foreign investors for peanuts along with incentives, while ordinary Bahamians who want a small 1/4 acre parcel of Crown Land on which to build a "pre-approved plan" low-cost home to just be able to survive and raise their children and have money to afford to raise them well, are told "NO" - you go and take a mortgage from the bank and pay interest.