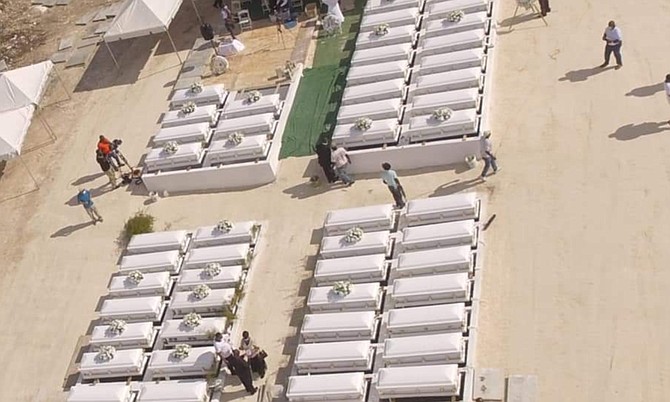 The mass burial of 55 Hurricane Dorian victims in Abaco.

CENTRAL and South Abaco MP James Albury has called for an inquiry into the process that led to the burial of 55 Hurricane Dorian victims on Friday.

However, he wrote in a letter on Saturday: “As you are aware, on Friday, May 22, the bodies of 55 victims of Hurricane Dorian were laid to rest at the Central Pines Public Cemetery. Though some in Abaco feel a sense of relief and closure that the victims’ bodies have now been laid to rest, as we approach another hurricane season, there are many who will remain unsure of the location and fate of their loved one(s).

“Sir, I would be remiss if I did not request that a formal inquiry into this eight to nine month process and the timelines of this procedure be looked into by the appropriate agencies. I feel a review of this is not only imperative for the families of Abaco, but also for the proper handling of any further mass casualty events––God forbid.

“I believe your assistance with this may help in bringing answers and further closure to the people of Abaco. Please know that I am appreciative of the ongoing efforts made by the Disaster Reconstruction Authority as they carry out their mandate, and this letter does not seek to reflect poorly on them, but to request clarity on the matter at hand.”

“There is recent precedent on this,” he said. “Mr Albury has fallen into the same error as did his parliamentary colleague Travis Robinson, who by convention was bound by the Cabinet’s decision to hike value added tax by 60 percent, yet Robinson opposed and voted against the tax hike in Parliament. We all know what naturally followed under Westminster conventions.”

Mr Albury is parliamentary secretary in the Office of the Prime Minister in Abaco. Friday’s service was marred with controversy as some residents protested the event and were angered that due to social distancing guidelines, many who lost loved ones could not grieve properly. Some also claimed there was not enough communication from authorities ahead of time.

We all know that the reported death count from Hurricane Dorian is a mere fraction of the true death count. The Government was hoping to avoid a public relations disaster, and have dug themselves, literally, into a shallow grave. I sure hope that Tropical Shipping retires those refrigerated containers that have been holding the dead bodies up in Abaco for MONTHS!! Things would have been so much easier if the government were just up front and honest about the body count from the get go.

Very unfortunate that a young and inexperienced person has been put in such a position. He was elected to replace an ageing dinosaur, that much is certain, but he could not have expected, in his wildest dreams, to find himself in such a position. For that matter it is very likely that not one government of this country has bothered to take into consideration the possibility of the bottom falling out of the economy in the way that it has. The old saying that you don't miss the water until the well runs dry is certainly true. Be careful with the IMF; after dealing with them you can expect higher taxes and eventual devaluation. We might be fortunate enough to accept dollarization instead.

James Albury does not need to resign. The PLP need to stop this political garbage. This man is doing what he is elected to do as an MP. Because of our stupid political system, if you in cabinet you are muzzled as a MP to speak on behalf of your constituents. Instead of talking foolishness about resignation, Fred and Gravy Davis should be applauding him for being responsible as an MP and speaking up for what his people are saying. IAfter all, don't MP's represent the people and are to be their voice?

Tried of this political garbage in our country. But then again never expect anything better from Fred and Gravy Davis as they have no moral ethics to begin with.

Where in the letter to Mr. Minnis, did the comrade South Abaco red coats MP, offer his apology to the families of the 55 deceased. The MP, didn't actually say that something terribly wrong occurred with to the 55 dead bodies? It's more of a polite letter of inquiry, and what about all the other dead bodies - still unaccounted for?
What test is used to diagnose someone with such close advisory working ties up in and out the OPM hasn't experienced but a sudden ramped up fake coming to Jesus' awakening moment? Abacoians will wait for some further sign of the South Abaco's - sincere conversion away from all things and matters, red coats. Nod once for yeah, Twice for no?

Ma comrade Sheepie, count you among the more politically savvy. Do you really believe that the South Abaco red coat MP, actually formatted the letter to Mr. Minnis?
I cannot help but see the OPM's comrade sister Erica's no tears shed penmanship stamped all over Jimmy's polite letter of inquiry?