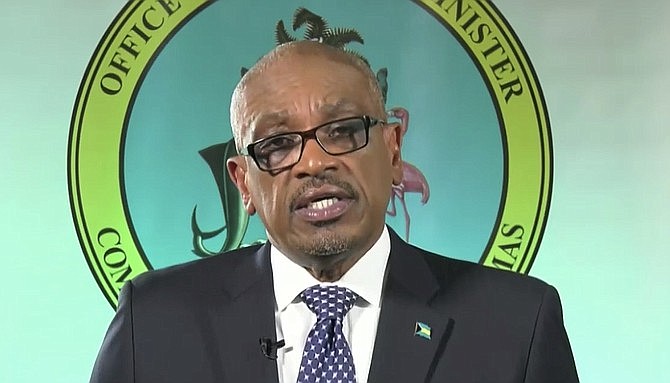 The PM - Hubert Minnis - who now also holds the Minister of Health portfolio, has been reading out prepared televised speeches rather than engaging directly with the public.

People who believe in individual freedom in society and regard themselves instinctively as libertarians normally have an innate distrust of authoritarianism, and, in a democracy, they are on guard against any perceived encroachment by the state on civil liberties.

Even though, as every student of politics knows, democracy should mean rule by government of the people, by the people and for the people, in larger countries governments tend, by their nature and size, to become autocratic and unaccountable. So there is a need for constant vigilance to protect democratic freedoms and to ensure the actions of the executive are not unreasonable or beyond the law; and, as far as possible, are in accordance with the wishes of the people.

It follows that an essential element of good governance is communication with the electorate. Accountability and openness are a vital part of any government’s success because in a democracy it needs to rule with the consent of the people. Governments have a duty to disseminate information about their policies without undue secrecy, and this is particularly important in countries with no Freedom of Information legislation.

In light of this, I agree with my fellow columnist at The Tribune, Alicia Wallace, who wrote last week that during the current coronavirus crisis here in The Bahamas the people’s relationship with the Government is the inverse of what it should be, with those concerned having to chase the administration for information. Clearly, executive decisions about handling the virus should be based on the advice of health professionals. But political leaders have to look at the broader picture and what will work in practice. It is for them to make the final judgements about what is in the interests of the nation as a whole after weighing up the relevant factors including competing demands for resources – and it is incumbent on them to communicate fully those decisions to the public and to be as transparent as possible.

This issue came to a head last week with the public admission by the Deputy Medical Officer that he did not know why some Family Islands had been allowed to resume commercial activity while others had not. Such a question should surely have been put to the policy-makers. But the Prime Minister, who now also holds the Minister of Health portfolio, has been reading out prepared televised speeches rather than engaging directly with the public. So it appears there is no opportunity for the press and others to seek clarification about important issues like the phases of reopening. As Alicia Wallace pointed out, the public needs answers to questions about government policy such as the basic one of what metrics or criteria are being used to determine how to move through the phases - and it is puzzling that the Government should not be completely open and forthcoming about all this in the best interests of everybody.

Like many others, I am similarly doubtful about certain aspects of the British government’s handling of the COVID-19 crisis – most recently, the idea of quarantining all visitors to the UK for 14 days. This looks to be both too late and unworkable with people travelling into London on public transport to reach their place of isolation. From the beginning, it has been of great concern to many in Britain that there was no proper scrutiny, debate or vote about the lockdown regulations before they were implemented in March.

Many also believe the restrictions are disproportionate to the harm they are supposed to be preventing, not least through the destruction of people’s livelihoods by shutting down the economy. But at least the government is attempting to keep the public informed through daily press conferences chaired by a Cabinet minister flanked by the medical experts.

Against this background, there seems to be a row developing in the UK about the quality, accuracy and consistency of the scientific advice offered to ministers. The recommendations appear to have varied, with some medical experts advocating lockdown in the face of a silent and invisible killer and others saying it will make no difference to the transmission of the disease if people continue their normal lives unless they are elderly and have an underlying chronic illness. For example, Professor Neil Ferguson of Imperial College in London - whose original estimate in March that coronavirus would claim 500,000 lives without firm intervention by the government  - has been discredited as his prediction has turned out to be greatly exaggerated. Meanwhile, in the US, presidential medical adviser Dr Anthony Fauci is now under fire for radically changing his tune as the crisis has continued.

It seems that extreme predictions may have spooked the politicians into taking overly stringent measures to prevent the spread of the virus, but ministers can only make judgements based on the information and advice they receive and, if that is flawed, they may make bad decisions.

Looking at this further, I found it interesting to delve into the non-fiction book “Intellectuals and Society” by the renowned African-American economist and social theorist, Thomas Sowell, who, according to his publicist, writes from a libertarian conservative perspective. Published in 2010, it is a classic work about the growing and undue influence intellectuals and claimed experts have on policy makers and public opinion – and about how often their prescriptions for the ills of society have turned out to be wrong.

China back in business while the rest of us all suffer

Staying on the subject of the virus, with the latest figure of 5.5 million cases globally, such is the enormity of the unprecedented crisis that people are now beginning to wonder how it was nobody saw it coming – even in China where it all started. The rest of the world is now holding Chinese leaders responsible for not advising other countries about the danger that it could spread so readily and with such deadly effect.

Among many others, US Vice President Mike Pence is on record as saying China was at fault for not warning the rest of the world of the seriousness of COVID-19 so that other countries could have taken earlier action in dealing with it.

It will have come as no surprise that China has denied such responsibility and some argue this is not the time to make it a scapegoat over coronavirus because tensions are running high on other fronts with China - such as its military activity in the South China Sea, an ongoing trade war with the US and, most recently, its new security law for Hong Kong which will almost certainly result in fresh confrontation with the West and with Hong Kong itself.

They agree, however, it is ironic that, while the rest of the world continues to suffer, China’s economy, reportedly, has been stabilised and is returning to some sort of normality – and one result is that it is now even supplying personal protective equipment for medical staff in other countries.

China, in effect, exported the virus to the world and is now back in business leaving everyone else in an economic mess.

We have to find a way of living with the virus

A friend has drawn attention to the high rate of COVID-19 infection in Bahrain compared with The Bahamas. This Persian Gulf island nation is not much bigger than New Providence. But, with a larger population of about 1.5 million, it might be expected to have had more cases than The Bahamas. In fact, it has recorded substantially more – some 9,000 compared with the 100 here. Can it be deduced from this that early closure of our airport and severe lockdown restrictions have made the difference? If so, the FNM government deserves much credit, though without empirical evidence this cannot be determined for sure.

Nonetheless, it is interesting that beyond our shores doubts are being expressed about the effectiveness of lockdowns in preventing the spread of the virus – the basic question being whether the number of cases and the high death tolls in Europe, in particular, would have been even higher if there had been no lockdowns.

A study just released by financial services giant J P Morgan has found that lockdowns have failed to alter the course of the pandemic and that infection rates have actually fallen since they have been eased in different countries. It concludes that coronavirus “has its own dynamic” and is unrelated to lockdown measures since the data does not support the idea of an exact relationship between the level of economic activity and the spread of the virus. This view was echoed last week by Nobel prize-winning scientist, Professor Michael Levitt of Stanford University.

He is reported to have said that lockdowns could have caused more deaths – through social problems like alcoholism, domestic abuse, mental illness and suicides – than those they saved, and that keeping people indoors by coercion, apart from self-isolation for those infected, was motivated by panic on the part of governments rather than the best science.

Such findings will be controversial. But in the UK it is interesting that no less a figure than Lord Sumption, a former Justice of the Supreme Court, has written that the lockdown there was originally imposed as a temporary measure to protect the capacity of the National Health Service and it can no longer be justified. This is because it is depriving the whole population of its liberty and pushing the country into a full blown recession, destroying millions of jobs and businesses, increasing public and private debt and disrupting education. He added the government had terrified everyone into submission by giving the false impression that the virus was a deadly threat to all – ‘if you go outside, you are putting your own life at risk and threatening others’ – whereas the evidence showed the principal threat was to older people with vulnerabilities while many who became infected only suffered mild symptoms.

Whatever view one may take about the effectiveness of lockdowns, the general opinion of those I have talked to now seems to be that COVID-19 is likely to be around for the foreseeable future and it goes without saying that possible transmission of it in The Bahamas needs to be controlled as far as possible.

Since, according to reports, a vaccine and treatment will probably not be available for a year or more, it has become clear the country has to find a way of living with the virus. So social distancing measures will remain important if we are to resume any sort of normal living – wearing masks, washing hands and using sanitisers, avoiding close physical contact, staying at home if showing virus symptoms, screens at food store and other checkouts, no large gatherings and, above all, increased testing, tracking or tracing in order to isolate any new infections. If the latter is done effectively, it should surely only be necessary to have a targeted lockdown of new cases -- or of those at particular risk because of a separate underlying condition -- rather than restricting the vast majority of people.

Clearly, the lockdown cannot be imposed ad infinitum. It is likely that the threat of the virus in, say, the next month or so will not have changed. So, as long as social distancing is done properly, it is hard to see how continuing the lockdown can be justified -- even for another day. For example, why wait until the beginning of July to reopen borders when the situation then will probably be no different unless, of course, by that time the virus dies out naturally – and why force retailers to remain closed when, like supermarkets, they can control how many customers enter their stores. I think the argument about protecting the country against another wave of the virus is doubtful since the original numbers have been so relatively low. But testing and tracking will surely be the key.