Nearly 1,000 Apply To The Ministry To Visit Bahamas 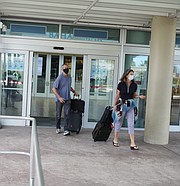 SOME of the first arrivals at Lynden Pindling International Airport after the country reopened to tourists. Photo: Terrel W Carey Sr/Tribune Staff

DEPUTY Director General of Tourism Ellison “Tommy” Thompson revealed yesterday that nearly 1,000 travellers have already made applications to the Ministry of Tourism’s travel unit wanting to visit The Bahamas during the country’s second week of relaxed travel restrictions.

Calling the numbers “promising”, Mr Thompson told The Tribune yesterday applications to the unit have been coming in steadily and officials are hopeful numbers will pick up for the upcoming holidays.

Speaking about travel applications made for next week, he added: “It’s under 1,000 at the moment but it’s looking promising.”

His comments come after Tourism Minister Dionisio D’Aguilar on Saturday said data suggests international tourism is down by 70 percent due to COVID-19’s impact.

Given the nation’s heavy reliance on tourism to generate revenue, Mr D’Aguilar said there was a need to safely reopen so the Bahamian economy can begin its recovery from COVID’s impact.

Yesterday, Mr Thompson said plans are already underway in the ministry for the roll-out of several of its campaign strategies to attract visitors and show the world that the country is ready for business again.

However, he noted officials will not streamline any of their major marketing ads until some of the country’s top hotels have announced when they will resume operations.

“We already have in the can the complete marketing programme, but we are not going to roll that out until we have a clearer picture of when the major resorts are opening and when the flights are ramping up even better,” he said.

“It’s just a matter of when to find the opportune moment to implement them… so advertising itself has been more pulled back at this particular time but in terms of engagement with the travel partners, that’s all been ongoing.”

Travel protocols mandate that visitors and returning residents entering the country must present a negative COVID-19 RT-PCR test no older than five days and have an approved Bahamas health travel visa.

While travellers are no longer required to take a COVID-19 rapid antigen test upon arrival, they must still do so on the fifth day of their visit (unless departing on day five).

Failure to do so could result in a $1,000 fine or one month in prison for travellers.

Speaking on how officials will police the new measures, Mr Johnson said: “Everyone is in the system and so the system then flags you when it’s time for you to do your tests five days later and the day before, you get an alert. “If you don’t comply with the alert, all of your information is in the system so that’s when the Ministry of Health and enforcement unit (will) kick in and do what they have to do.”

He also said tourism officials are currently engaged in discussions with hotels across the country concerning quarantine protocols should a visitor test positive after arrival.

Officials have previously said that visitors who find themselves stuck here due to testing positive to COVID-19 will be provided a per diem under the travel health insurance, which they will be mandated to purchase beginning November 14.

“We’ve been working with the hotels throughout the Bahamas for them to identify portions of their hotels or rooms in the hotel that can be used as a facility like that,” he told this newspaper.

“The beauty of the health insurance is that cost is not borne by the Bahamas government or the hotel. The insurance then kicks in to make sure that the developer has quarantine or vacation in place for that 14 days.”

“That funding comes from the insurance company.

“That person who buys that insurance, they are then incumbent to buy that.”

Tommy and Super Wash sound so proud of this accomplishment! Congrats on your "under 1000" visitors lol

thought the same. that's dismal. I hope we haven't sacrificed our lives again for 1000 tourists would have been better to put it off, have all the systems in place and tested and advertise a fully functioning virus minimal environment. who can afford another 200 deaths for a rushed opening.

The US set another record breaking day, recording 108,000 Corona cases nationwide and every single state in the US seeing record increases. Is the US reaching its peak, that The Bahamas experienced two weeks ago? Will the numbers start falling off, like they are doing in The Bahamas or is the US headed into the dark days of a twin pandemic as experts are saying? They claim the corona and the common flu will wreak havoc during the winter months? If the country is reaching the end of the third wave, the numbers will most definitely fall off. And there will be no vaccine anytime soon as two of the forerunners have stopped their trials. Will the virus just dry up and disappear?