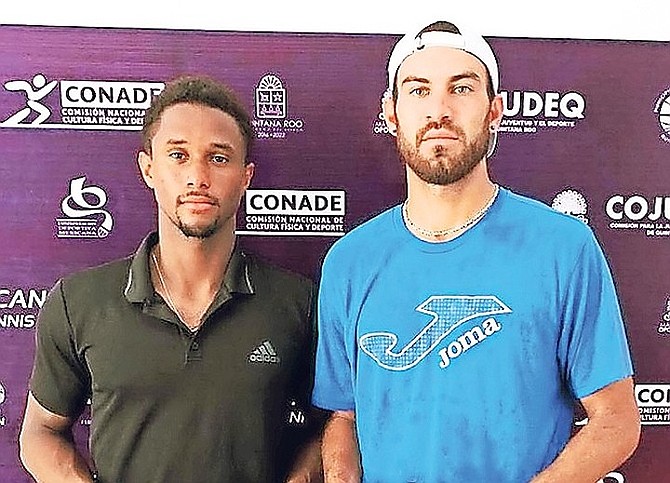 THE run for the men’s doubles title at the Legacy Bank NWA Tennis Series ended in the semifinals for Bahamian Justin Roberts and his long-time partner Jody Maginley from Antigua & Barbuda.

The unseeded Caribbean duo got ousted 6-1, 6-3 at the International Tennis Federation’s M15 Tournament in Fayetteville, Arkansas, on Friday by the combo of Charles Broom of Great Britain and Matlas Soto of Chile.

“We didn’t serve well and we didn’t return very well,” was how Roberts summed up the defeat. “The other team was very solid. They served very well. They committed more errors than we did. They were just a better team today.”

For Maginley, the review was basically the same as Roberts. “I think it wasn’t the kind of match that we expected,” he pointed out. “You don’t always play as well as you expect, especially when you have a day off. We always want to go out there and give it our best, but obviously good teams find a way to play much better and that was what our opponents did.”

After pulling off a 7-6 (6), 6-3 win over Boris Aires of Bolivia and Ricardo Rodriquez of Venezuela in their first round match, Roberts and Maginley were awarded their quarterfinal win by a walkover after American Justin Butsch was tested positive for the coronavirus and he and his compatriot Alex Rybakov were unable to play their match.

“We just have to play more matches,” said Roberts as he looked back at their performances, which included both of their exits in the final qualifying round of the men’s singles on the same day.

“This was just our first tournament since March, so it was good to play some real tennis, so we just have to look forward to the next tournament. Hopefully we can get back into our rhythm.”

With just the weekend of to recuperate, Roberts said he and Maginley, who are also room-mates in Texas, will be back on the court today in practice as they prepare for their trip to the Dominican Republic at the end of the month for two final tournaments for the year.

“We don’t have any expectations, results wise, but we just hope to go out there and put it all together on the court,” Roberts projected.

“We will go there and compete hard and hopefully we can get some rhythm and end the year on a good experience.”

The Dominican Republic has always been a favourite spot for Maginley to end his season and so he’s anticipating some great results when he and Roberts participate in the two tournaments.

Roberts, 23, and Maginley, 25, have been friends since they began playing in the ITF junior circuit.

While they went separate ways in college with Roberts competing for the University of South Florida and Arizona State University and Maginley for Northern Kentucky, they remained close and reunited about three years ago on the pro circuit.