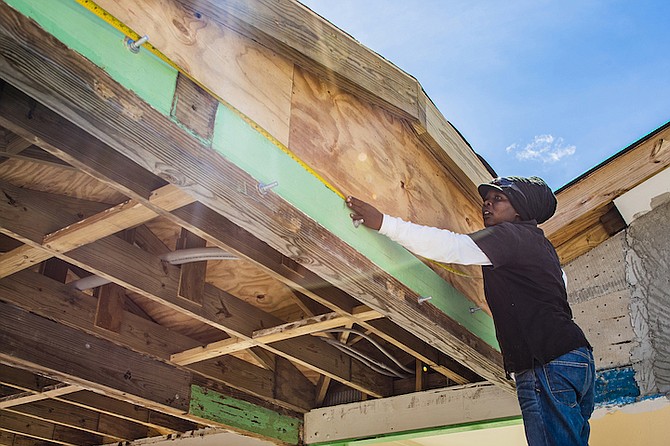 SITHA SILIEN, 28, a proud resident of Abaco, shows off the skills she learned as part of the GER3 Team while working on the Central Abaco Primary School restoration project. Photo: Zyndrac Jones

GLOBAL Emergency Relief Recovery and Reconstruction (GER3) is not only rebuilding communities in Abaco, but also helping to rebuild the lives of residents there, including Dorian survivors.

One year after the storm, GER3’s Global Response and Recovery Team remain operational on that island working in vulnerable communities to restore schools and shelters, while also hiring and training Bahamians.

Dorian survivor Sitha Silien, 28, of Marsh Harbour, was among many residents of The Peas who lost their homes and loved ones during Hurricane Dorian. Her mother, 54, and brother, 25, perished in the storm.

The Haitian community was devastated, leaving Silien, her father, and nephew (her deceased brother’s son) homeless. They went to New Providence, where they stayed at a shelter.

Determined to rebuild her life, Silien returned to Abaco on January 3, anxious to find work. She was doing a few odds and ends for some three and a half weeks when she learned about the restoration work GER3 was doing at the Central Abaco Primary School. Silien went there and was hired to work.

“It was like God had GER3 waiting for me,” recalled Silien, who now had to care for her little nephew. She remembers her brother’s last words when he handed his son to her before running off into the storm to find their father, who had been separated from them during the storm. Her brother never made it back, and her father was later found battered, but alive.

She is among some 30- 50 plus persons and local contractors working with the GER3 restoration programme in Abaco.

Sitha has gained a wealth of knowledge in the construction field. She initially started removing debris on the campus and then moved up the ranks to pitching roofs.

“I could tell you that I learned so much, and I appreciate the work,” she said. With the money she earned, Sitha was able to save enough to rent an apartment and purchase a vehicle, which she all credits to GER3.

GER3, which was founded by Langdon Greenhalgh in 2017, is headquartered in Winchester, Virginia. Its mission is to help crisis-affected people after disasters build back better. GER3 was one of the first NGO groups on the ground in Grand Bahama, days after Dorian passed.

Margaret Bacon, GER3 International Programme Coordinator, said their objective is to get into the disaster area immediately after any global emergency, be it a hurricane or earthquake.

EAGLES PRIDE — The Central Abaco Primary School Eagles motto was proudly displayed on the school’s wall as part of the restoration feature after a portion of the school was destroyed by Hurricane Dorian in August of 2019. (Photo by Zyndrac Jones)

“The idea is getting in there for the immediate relief phase: removing debris and making sure people are safe. Then transitioning into rehabilitation work: muck-and-gut, mold remediation, debris management, and long-term repairs, focusing on homes, schools, and health facilities,” she said.

The GER3 team, which is a small organization primarily volunteer-led, assists with moving to the recovery and reconstruction phases. She explained that they bridge the gap between relief and recovery work once the immediate relief organizations leave, building back more resilient structures and communities so that they are better suited for future emergencies.

Ms Bacon indicated that they use a small international team that can provide the right expertise while simultaneously building a local team, using local suppliers.

The Housing Rehabilitation project was funded by the Centre for Disaster Philanthropy. Many of the residents who lost their homes and a number of the homeowners joined the GER3 team through its Cash for Workers Programme. They were paid daily to help with debris removal and rehabilitation work.

The programme helped to provide locals with income and skills they may not have had before. Now that the programme is complete, they can perform mould remediation work or home repairs and take those skills to perform work on their own homes or market themselves for future employment.

The four-member GER3 team consists of two project managers, one programme director, and Bacon stayed in Grand Bahama until December before heading to Abaco where they have spearheaded several projects.

Ms Bacon said the duration of GER3 ‘s stay depends on the need and funding. “We’ve been really grateful in The Bahamas that many donors have been interested in our work and appreciate all the things that we are doing. It’s been basically one project after another,” she said.

“We started with the schools and homes in Grand Bahama. UNICEF was supporting us there, and then they said, ‘look we’re really happy with what you are doing and we want you to see if you can do the same kind of work in Abaco.’ “

In Abaco, the team is also working on homes for teachers and social workers. They have expanded work to another school, Every Child Counts (ECC), a special needs facility in Marsh Harbour, and rehabilitation work on three hurricane shelters, (in Treasure Cay, Guana Cay, and Man-O-War Cay), and 15 additional homes.

The projects are expected to end in December or January., according to Ms Bacon.

“At last count, there were between 30-50 daily workers, along with a wide range of local contractors for the different repairs,” she said.

Even with the COVID- 19 pandemic, Ms Bacon stated that the team has been fortunate to be able to stay in Abaco and work, unlike some of the other aid response organizations. She said they continue to receive remote support from team members back in the United States.

Rochelle Russell, a teacher, and administrator at Central Abaco Primary School, was in the United States with her husband and two sons during Dorian. She returned three months ago to begin the restoration process of their home.

Knowing what her family, friends, and colleagues were going through back home and hearing of the horror stories and the lives that were lost, she said was heart-wrenching,

Although they had seen photos of the devastation, the Russells knew the situation was dire, however, it still hadn’t prepared them for what they saw when they returned home after the storm.

Mrs Russell is very pleased with the work GER3 is doing on the island and all of the lives they have touched.

“It’s indescribable; words cannot describe the feeling,” said Mrs Russell. Just to see all of the restoration effort and all of the hard work that they have put in, you just can’t thank them enough. It means a lot to the educators, but it also means a lot to the parents and students who can return as soon as the okay is given for face-to-face instruction,” she said.

GER3 has been a great blessing, Mrs Russell said. “A big heartfelt thank you. They have been a Godsend. They have not only helped restore the school, but they have also helped persons restore their homes and come in and helped us to see if we could try to bring our lives back to some state of normalcy,” she said. “They have been more than generous, and you can feel the love and support — not only in a financial way, but also emotionally and mentally in assisting the process to move along smoothly.”

Wonder what be likes were, God, reach out touch hurtin' Abacoians? Shakehead once for Yeah, Twice for Not?

This is like if a bomb goes off at a bank, during an armed robbery, and the ambulance shows up and rushes the robbers off to the hospital for medical care. Bank employees and customers, left on the ground.

They could have had a very cool acronym if they called themselves GLOBAL Relief Recovery and Reconstruction Emergency Fund (GREEF). I added an E, cuz you can.

The best part of this program is not the rebuilding but the transfer of skills. Been advocating for a public service skills development program since the Christie administration focused largely in technology if they had jumped on that we wouldnt be where we are. Unfortunately our leaders only seem to see the light when the house burning down...or the train about to plough them over.

The question here is why must it be an outsider group to spearhead such transfer of skills? Where are the Construction Professional Community? They can not agree on an established Standards of Building Code. Even when these exist in the country's neighborhood. Must be doubt & fear of their own skills, or the crabs-in-bucket syndrome. They will ultimately benefit as the labor pool skills are improving. There must be an apprentice program for anyone, not merely graduated students. (Graduated from what with what?) Don't expect the government to take the lead, they are full of 'lifers', people who merely exist for the next paycheck. As the world leaves them behind. There are three types of people in this world: 1. Those that Make things happen. 2. Those who Watch things happen. 3. Those who Say 'What Happened?"