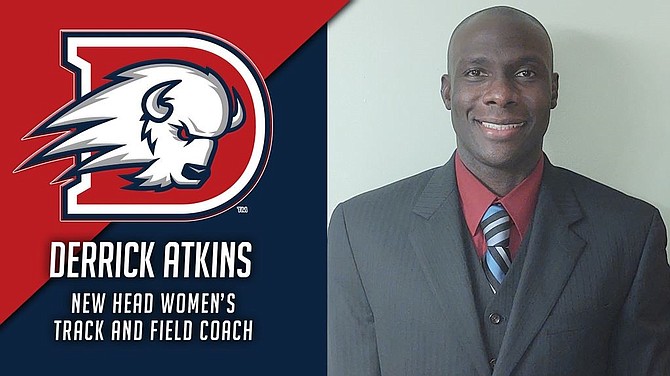 Men’s national 100 metre record holder Derrick Atkins, who still holds the distinction of being the only Bahamian to win a male sprint medal at the World Championships, has been named the new head women’s coach of the Trailblazers’ track and field club at Dixie State University in Utah.

Yesterday, Atkins was formally introduced to Dixie State University by Dr Jason Boothe, director of intercollegiate athletics, who noted that he brings a wealth of knowledge and world-class experience to help their young team grow and compete at the highest level.

“Derrick will undoubtedly provide an elite level of coaching that our team will need to take the next step. He will strive to instil determination, ambition, sacrifice, and hard work in each student-athlete as he develops them into not only great student-athletes, but leaders beyond their college years as well,” Boothe said.

“He has competed and won at the highest levels of track and field and I have no doubt that he will also be very successful here during this exciting time at Dixie State!”

Accepting the job, Atkins said he’s thrilled about the opportunity, having moved up the ladder after spending the past two seasons as an assistant track coach at Western Carolina University.

During his tenure at WCU, Atkins was instrumental in helping guide the Catamounts to a 2019 Southern Conference men’s indoor and outdoor championship sweep, as well as a women’s indoor runner-up finish in 2019, and a 2020 men’s indoor second-place showing.

Before he went to WCU, Atkins served three seasons as an assistant coach at Kennesaw State.

He was welcomed to the division one coaching fraternity by fellow Bahamian Norbert Elliott, who took over as the head coach for the Boilermakers at Purdue University after another Bahamian Rolando ‘Lonnie’ Greene left for the head coaching job with the Wildcats at the University of Kentucky.

“I’m really excited and very proud of Derrick,” said Elliott, a former versatile athlete at St Augustine’s College who went on to represent the Bahamas in the triple jump at the Olympic Games.

“I was a mentor of Derrick for some time and I think he has certainly learned quite a bit. There is a lot more for him to learn, but I know that he is capable of handling a division one job, having worked his way up the ranks the right way, starting as a volunteer coach and then becoming an assistant coach.”

Although they are not expected to clash in any meets as they are in different athletic conferences, Elliott said he’s looking forward to Atkins joining him and Greene, assisted by “Golden Girl” Debbie Ferguson-McKenzie, on the big stage at the National Collegiate Athletic Association (NCAA) National Championships.

“In the sport of track and field, we are a close-knit coaching fraternity and with blood thicker than water, me and Lonnie will be looking out for him and Dominic Demeritte and the other coaches,” he said.

“As two of the senior coaches, we want them to know that they can call us for any assistance we can render.”

Before he switched to coaching, Atkins enjoyed a successful track career as a sprinter, having represented the Bahamas as a semi-finalist in the 100m in both the 2008 Beijing and 2012 London Summer Olympics Games. He also competed in three International Amateur Athletic Federation World Championships with his crowning glory coming in Osaka, Japan in 2007 when he clinched the silver medal in the 100m in a national record time of 9.91 behind American Tyson Gay (9.85) and just ahead of Jamaican Asafa Powell (9.96).

He also led Dickinson State to consecutive NAIA outdoor national championships in 2004 and 2005, and to a runner-up finish in 2003.

He has captured the Bahamas Association of Athletic Associations’ 100m title at the National Championships seven times from 2005-2009 and again in 2012-2013.