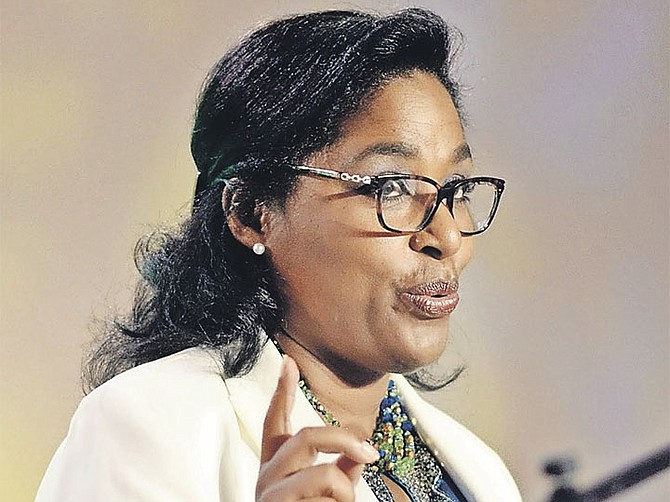 MONIQUE Pindling, the daughter of former Prime Minister Sir Lynden Pindling, has publicly confirmed her bid to be the Progressive Liberal Party’s nominee in the South Andros constituency in the 2022 general election, telling The Tribune she wants to help “fulfil the plan that was laid out for Andros so many years ago”.

Her efforts face significant headwinds since PLP Chairman Fred Mitchell said in March that party leaders want to renominate its four incumbents, including current South Andros MP Picewell Forbes. A 13-year veteran of the House of Assembly, Mr Forbes has repeatedly expressed conviction that he retains the support of his constituents.

Careful to avoid friction or draw comparisons with Mr Forbes, Ms Pindling, 53, said though seeking her party’s nomination has been “challenging”, she still hopes she will be given a fair shot.

“I hope for an opportunity to take my message to the people of the constituency and let them decide,” she told The Tribune.

“If the branches and the people want to continue with the incumbent, I will support that. My reason for doing this is for Andros to finally get the attention it so deserves. Ultimately, the decision lies with leadership to make the process fair for everyone. No one, including myself, is entitled to an automatic nomination.”

“I would actually like to congratulate Mr Forbes on all he has accomplished during his tenure in Andros,” she added. “However, today we find ourselves in likely the toughest times in our country’s history. Bahamians need impactful leadership now more than ever before. As a woman who carries the responsibility of raising the next generation of Bahamians, I see and feel the roadblocks our youth face every day. I fully recognise Androsians need new passion, vitality and a plan. While I am a team player who would welcome a partnership for the sake of the constituency, I believe I am the best way forward for Central & South Andros and Mangrove Cay constituency.”

“The development of its constituencies has been at a crawl resulting in the deterioration of the island’s infrastructure,” she said.

“At the beginning of the year I visited the islands not sure what I was going to find. At the end of the visit, I found that I was inspired, disappointed and overwhelmed all at the same time. Some residents were energetic and hopeful; others were just hopeless,” she added.

Asked what her vision and plans would be for the constituency her father represented for 30 years, she said she wants to spur development that would increase tourism revenue, stimulate agriculture and fisheries production, increase export earnings, produce electrical power and sustain local employment.

She said establishing “relationships with international educational institutions, universities, research colleges and centres to serve as training centres for Bahamians” would be a priority, adding: “Elevate the Bahamas past its service-oriented resort and playground of the world to being a place of higher levels of education, intellectual, scientific and academic attainment.”

“Andros is ideal for solar panel files which would reduce energy bills and aid in fighting climate change by reducing greenhouse gases and carbon emissions,” she added.

“The west side of Andros is the capital of ‘mother nature,’ - vast biodiversity can offer a variety of engaging experiences. (Let’s) supply the island with fresh vegetable and fruits; extend production for the country and export; further extend production to eggs, chickens, mutton and beef.”

“My ever-present love for Andros is unwavering,” she said. “It is what drives my desire to properly serve and represent its residents.”

You want to fulfill the plans that was laid out by when exactly? Let's say 2050 you just might start

Nothing’s wrong with Monique trying to redeem the lousy Pindling PLP Legacy in South Andros. She is asking for the second PLP Pindling Opportunity to make things right in Pindling’s PLP Name.

Wasn't she the one who tried running some many years back? I remember rumors about her campaign handing out all kinds of "gifts" to ensure a "positive attitude". Then after she lost, there were rumors about her staff going door to door trying to confiscate the "gifts" back.

She and her team were also rude and xenophobic. I speak from personal experience not hearsay.

The economy has many individuals coming out of the woods who are trying to cash in on Politricks by using the ignorance of the D average masses.

She must think the good people of South Andros are total fools and so desperate that she can simply buy their vote. This is one crab that must be made to crawl back into her hole where she belongs.

Just like the PLP to devour their own. Why fight for what is already a PLP seat when there are so many others available?

Illusions are easy, and often look completely different depending on which side one sits. Reality is another thing entirely. Delusions of Grandeur run strong in the PLP.

The PLP are a political hemorrhoid that can't seem to go away... we need to make sure they win 0 seats in the next election to permanently banish them to the dustbin of irrelevancy.

Money must be running low,so it is time to replenish them

I'm settin' aside suspend my politics to lead a Comrades Adopt a Potcake Dog Walkin' Movement. Of course will have be granted exemption walk anything by the authority office prime minister.
Think about all thousands of Potcakes throughout 1200 out islands, cays, and rocks that COVID-19 is leaving be's left fight even harder little scraps food? Shakehead once for upyeahvote commit feed/walk a Potcake, likes thrice weekly, twice for not my thing?

What could possibly motivate this Pindling family member to want to enter politics? Her late father died extremely wealthy; her mother is likewise by all indications. She is presumably earning a very good income as a partner in a top tier Bahamian law firm. I do not believe it is normal for people to enter politics as a way to serve the people of this country despite each and every candidate so proclaiming, with a straight face too. I suspect she has reached the age where she has achieved goals and finds her life still empty and meaningless. How to fill the void? Become a respected, beloved leader of the people. It will be interesting to see if she succeeds.

This lady is not a lawyer. Her older sister Michelle is a lawyer and a partner at Graham, Thompson and Company.

i don't know this lady's motivation to enter politics. Bahamians love politics and power. Both prime ministers Mia Mottley of Barbados and Justin Trudeau of Canada's fathers were politicians. There have also been political dynasties both here and aboard.

The Pindlings are no political dynasty but rather a political disgrace. Has her tax dodger mother paid all of her past due property taxes and utility bills yet? Or did Vomit Christie while he was PM simply order/instruct that all amounts due from Lady P be written off?

Many, many same thousands POAL quick to launch personal attacks against the former prime minister Comrade LyndenOscar are today dependent up monies as their survival lifeline from the National Insurance Board NIB. Shakehead once for upyeahvote it was during a Pindling administration that NIB was commenced, twice for not that redcoats strong opposition to NIB didn't win out over Pindling?

In all honesty Mr: Pindling did very much for Bahamians. His record speaks for itself

Free High school education, the college of the Bahamas. NI. just to name a few. He made Bahamians especially those from over the hill to be proud Bahamian, under his leadership the middle class was created. which is no more.

He spoke well. conducted himself well and in the words of the pome, "He walked with Kings and never lost his common touch.

But the Bahamian who believed it was the": Peoples time are getting exactly what they deserve,

In all honesty Mr: Pindling did very much for Bahamians. His record speaks for itself

Free High school education, the college of the Bahamas. NI. just to name a few. He made Bahamians especially those from over the hill to be proud Bahamians, under his leadership the middle class was created. which is no more.

He spoke well. conducted himself well and in the words of the pome, "He walked with Kings and never lost his common touch.

But the Bahamians who believed it was the": Peoples time are getting exactly what they deserve, poop

Who needs a fridge and stove that will be repossessed after Elections?