Alicia Wallace: While Others Play By The Rules Others Show Total Disregard – We Won’T Forget Them 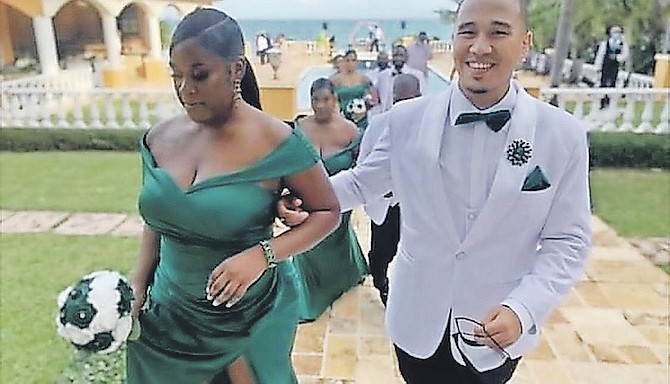 CARLYLE Bethel at the wedding that broke rules set out under emergency powers.

I know two couples who rescheduled their weddings multiple times this year. Neither of them had planned huge ceremonies or receptions, but they had plans. They had visions for these one-time events to mark their unions and had made a lot of difficult decisions over a long period of time to arrive at a clear idea of their wedding days. They talked about venues, numbers, flowers, menus, themes, bridal parties, guest lists, budgets, colour schemes, officiants, traditions and who knows what else. They had to change everything.

Planning a wedding takes a lot of work, not only because they are often large events with too many moving parts, but because there are so many people to consider.

The couple has to figure out what they must have and what is negotiable, what they can afford on their own and what will require support, and how to get most of their individual desires fulfilled without stealing joy from each other.

In addition to that, they think about family members and friends, what would make them most comfortable and how to make their wedding day memorable for everyone, but only for good reasons.

Many couples have had to postpone their weddings due to COVID-19 and the restrictions put in place by the government. While disappointing, frustrating and costly, people generally understand it is in our best interest not to gather in large numbers.

There have been graveside funerals for people who had given clear instructions to hold their funerals at the church of their choice.

People have been excluded from this ritual that is, for many, critical to the grieving process in order to keep numbers down. Award ceremonies, milestone birthdays and celebrations of all kinds have been cancelled or postponed. We have had to adjust.

Even if we are miserable, complaining every day and vowing never to vote for “Minnis dem” again, many of us are adhering to the restrictions. Some disagree with the measures being taken and would do as they pleased if not for the near-certainty that they would be caught and penalised.

Ordinary people have no way out. Whether going to the public pump for water, trying to make a dollar by selling coconut water, or sleeping outside because there is nowhere else to go, the law applies to us. Last names, parents, job titles and affiliations do not save ordinary people.

When photos of Carlyle Bethel, the Attorney General’s son, attending a wedding were made public, there was understandable outrage. The young man was not only present, but a member of the bridal party.

During a pandemic, with weddings limited to ten people, these people had a bridal party. They clearly were not concerned about the wellbeing of guests or the people they would eventually interact with and, for whatever reason, had some certainty that they would not face consequences for having a large gathering. Who gave them that confidence and is there more to go around?

Bethel issued a nonsensical “apology” that raised more questions than it offered answers. He claimed to have no part in planning the wedding which is a strange tack to take. It does not matter who did the planning. Attending a gathering of more than ten people is the offence. He also said he had no part in “executing” the wedding — another odd statement for anyone to make, but especially a bridal party member. He went on to say COVID-19 is a serious pandemic and he has seen the effect firsthand. We are left to wonder what his behaviour would be like if he had no “firsthand” experience.

Given all of the press coverage and social media conversation about it, everyone should know by now that people have been fined hundreds of dollars for trying to get water — essential for maintaining a clean and sanitary environment — during lockdown. In fact, Bethel spoke out about the fines and questioned judges’ decisions to fine people, calling for them to “apply their own measured judgment to each case”.

The way the emergency order was written, however, judges had to either fine or sentence people who broke curfew or lockdown. It is strange that Bethel, ill-informed, took this public position only to, months later, be part of a bridal party at a large wedding when it was explicitly stated gatherings of more than ten people are not permitted.

It is frustrating to see people living in a better version of The Bahamas than the one we are able to access. Tourists are encouraged to visit The Bahamas while residents are discouraged from travelling to the same places tourists are leaving. We are forced to change our plans while others carry on as if there is no pandemic and no restrictions that apply to them.

It is even worse when people know what the restrictions are and purposefully flout them. It was reported that an eyewitness contacted the police about the wedding, but the police did not disrupt the event. Perhaps they have been given instruction to let it go on and deal with later if it became public. Why not let them have a good time and issue fines of $200 later? It was reported that wedding attendees were fined up to $1,000. Is that enough for such intentionally reckless behaviour?

People were certain the Attorney General’s son would face no consequences or, at best, get a “slap on the wrist”. That seems to be the way it works when a person or their close family member is in a position of power. Really, they should be more inclined to keep their hands clean and attitudes in check, especially if they plan to maintain or aspire to positions of leadership.

Perhaps our collective memory is too short for people who play for power to be concerned about the optics of their words and actions. We need to make it known that we are paying attention, we will remember and we will not allow people who cannot govern themselves to govern us.