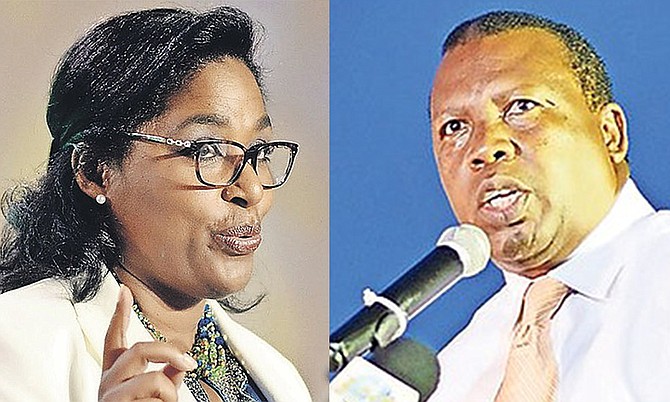 PROGRESSIVE Liberal Party Leader Philip “Brave” Davis said only something egregious would prevent incumbent PLP parliamentarians from being ratified as candidates in the next general election.

He made the comment as he suggested it is unlikely that Monique Pindling, the daughter of former Prime Minister Sir Lynden Pindling, could be successful in her bid to replace Picewell Forbes as the party’s nominee in the South Andros constituency.

“All incumbents are the presumptive nominees of the party in the following election,” Mr Davis said yesterday. “Unless there is something egregious that would cause the national general council to see otherwise, but it has to be something palpable.”

Ms Pindling told The Tribune over the weekend that she wants to bring impactful leadership to South Andros and “fulfil the plan that was laid out for Andros so many years ago”.

She expressed hope that she would be given a fair shot at the nomination and that the constituents of that area would decide who would be their party’s nominee.

Asked if Ms Pindling has been told that Mr Forbes is the presumptive nominee, Mr Davis said: “All aspirants were told of the status of their applications and what they ought to expect. They expect fairness in the process and that’s what they were told and fairness is what it will be.”

Ms Pindling told this newspaper that if the PLP’s branches and constituents want Mr Forbes, she will support that decision.

“My reason for doing this is for Andros to finally get the attention it so deserves. Ultimately, the decision lies with the leadership to make the process fair for everyone. No one, including myself, is entitled to an automatic nomination,” she said.

Poor Picewell. The PLP leadership apparatus is reacting to the overwhelming feedback from South Androsians that he's about as dishonest, dense and useless as they come. And true to form, Davis supports Vomit Christie's foolish recommendation that yet another Pindling be allowed to enter active politics to leverage what little if anything good remains of SLOP's legacy.

Many South Androsians have finally woken up to the fact that their interests are not served by either the PLP or FNM. Hopefully this means they will be voting for the candidate not aligned with the PLP, FNM or DNA in the next national election.

You are correct. However, money is still paid for votes. Mr. Forbes representation has been virtually non-existent. Much of Andros is rotting due to lack of leadership. Andros needs a change. Forbes must go.

The unfortunate part about electing a candidate not aligned with the frontline party that is victorious is that they will be just a voice in the wilderness, no funding, no notice taken of them. Unless there is a monumental shift in the way Bahamians vote, I just don't see it happening.

True. But, if it happens with each party, then what?

If the PLP was smart, they would put Picewell to run in Centreville where he likes to brag that he grew up on East Street with his Mama ....... and allow Monique Pindling to have her South Andros dream seat. Picewell stands a better chance of winning Centreville in 2022 than S. Andros.