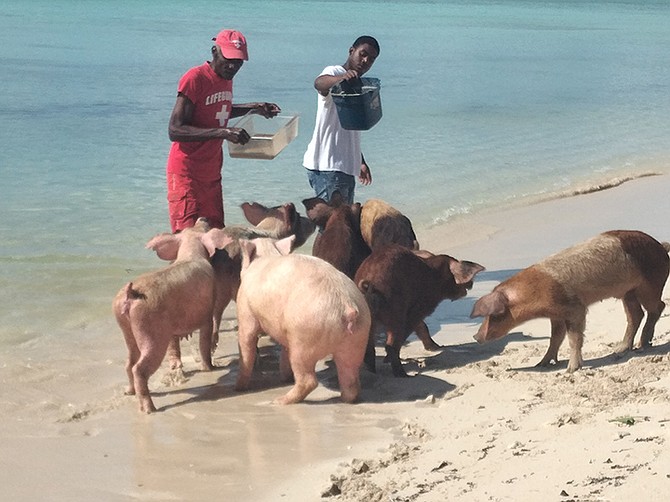 THE pigs being fed in West Grand Bahama.

CELEBRITY Eco-Adventures stand ready to resume tours, featuring their swimming pigs at Crystal Beach in West Grand Bahama, as soon as the tourism sector reopens on the island.

Operators Paul and Barbara Darville have kept a small staff employed to feed and take care of nine pigs and to ensure proper upkeep of their pens and premises until it reopens for business.

The couple is spending $2,500 per month to pay the staff, purchase feed for the pigs and for veterinary care.

In March, the operation closed as a result of the COVID-19 pandemic which shut down the cruise industry. Prior to its closure, the Celebrity Eco-Adventures employed 14 full-time workers and hosted 300 guests daily, particularly from the cruise ships. Locals also patronised the business.

They also operated a restaurant and bar, snorkeling and kayaking tours, music and DJ, and other outdoor activities, such as volleyball, and a 15-seater airboat.

“We are getting calls from the States and from locals about the tours,” said Paul Darville, who said they are ready 24 hours if someone wants to book a tour.

To date, the Darvilles have spent some $20,000 to ensure the facility ready, and the animals are healthy for when tourists and cruise ships return. They said that they are committed to investing in the business and to ensuring that the pigs are well cared for, even though the facility is not open.

In Exuma, however, tour operators are struggling to take care of the 60 swimming pigs and are disappointed that the government is not helping to feed the island’s main tourist attraction.

Exuma Water Sports owner Raymond Lightbourn depleted his savings and lost an estimated $2m in revenue. He spends about $70 a day feeding 12 pigs on White Bay Cay that were once featured on ABC’s The Bachelor––a significant expense in a year with so few tourists.

Bernadette Chamberlin, president of the Original Swimming Pigs Limited, a company that looks after some 60 pigs on Big Major Cay has twice asked tourism officials for help, but was rebuffed.

The Darvilles sympathise with the tour operators in Exuma and their plight to care for the pigs.

Although it is costly, Mrs Darville said it is something they are prepared to do.

“Our pigs are homegrown pigs; they are not imported, and we have to take care of the pigs even though we are closed,” she said.

“We have trainers and the guides come everyday and feed and clean the pigs, and make sure they are okay and put them in the water to exercise. And we have been doing this since the pandemic, and here we are still doing it.”

“We are waiting until the cruise ships and tourists come back to open up. In the meantime, this is what we have to do. We are ready 24 hours, if someone calls and says they want a tour, we are available.”

Celebrity Eco-tours has five persons employed to care for the 19 pigs – three large adult pigs, six small pigs, and the remainder of which are medium-sized. One of the pigs is now pregnant and could expect piglets soon.

“We have to purchase feed for the pigs, and it is expensive, and care for them. We have to get the Vets (local and an American vet) to come out and check them,” she said.

“Since March, we have been paying $2,500 per month to keep staff on and to feed the pigs,” said Mr Darville.

The Darvilles invested $500,000 to get the eco-tour business started. However, there was some controversy last April when they came under heavy criticism regarding concerns raised by a tourist of how it houses its “swimming pigs” in an enclosure on a remote rock in the sea.

At that time, the Darvilles denied any ill-treatment of their pigs and insisted that they were well-kept and properly housed in pens on the beach at the property.

On Wednesday, Mrs Darville said that they no longer do any tours on the remote cay.

“We do not have any tours out there on the cay, and we have taken the structure down,” they said. We had something built out there, and naturally, when we finished the tour, they sometimes swim out there and we would let them go, and by the end of the evening we bring them back to the beach (where they are kept in their pens),” she said. But that seemed to have caused a big controversy…and no one came to us, or called to find out or to see the pigs.

She said that Celebrity Eco-Adventures is just waiting to resume operations whenever the industry reopens.

“We are ready and waiting to go and are fully prepared and waiting. We have contracts with the ships,” said Mrs Darville, adding they are COVID-ready.

“We were prepared when they had the first opening; we brought all the things that were required to be in place,” she said.

My Comrades, I'm seriously tempted to take timeout work with comrades Paul and Barb, about how best use the swimmin' pigs as backstory, about how the pandemic is turnin' we colony's resurfacing pigs into unlikely cult figures. Thinkin' ask full-bodied Sands Beer's Comrade Jimmy to step up become the senior sponsor?
Shakehead once for upyeahvote happy see after nine months no news about their welfare, we pigs resurfacing in what appears to be in fit form, twice for not have time worry about pigs?

How about feeding hungry Bahamians? Those pigs would do just fine...

Is this the same group that threw the pigs in the ocean, or is this a different organization?
What happens naturally in Exuma is not easy to emulate.

Just checked... it's the same... guess they will drown some more pigs to make money.

I’m sick of these pampered pigs and the idiot tourists who squander hundreds of $$ for the privilege of overfeeding them and swimming in their shyte.

Comrade Clamshell, no worry Amazon lists several Inflatable Pig Blow Up Costume for Adults. Some look like the real thing, so be easy to fool the crazy tourists...but can you swim? And, YouTube offers a number of excellent EZ Steps Learn to Grunts likes Out Islander Pig instructional videos. Good Watchin, My Comrade!

I can swim, yes, but I avoid cruise ship tourons, even if it means giving up a chance to bite them or poop on them.