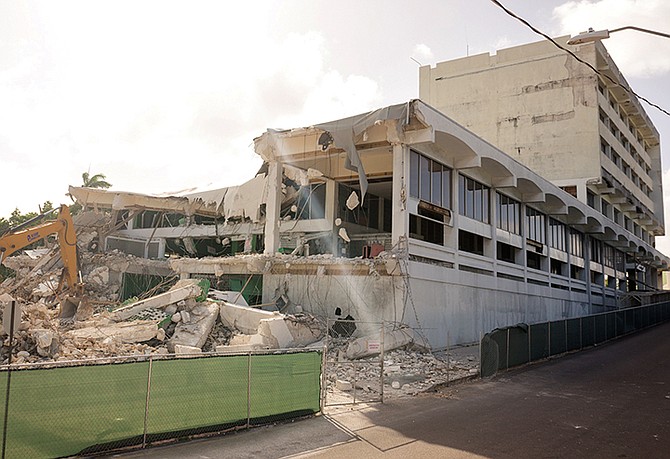 DEMOLITION of the General Post Office at East Hill Street began yesterday as part of efforts to modernise the downtown area.

The former Post Office is scheduled to be replaced with a new Central Bank of The Bahamas (CBOB) building.

The move follows similar works being done at the Nassau Cruise Port, with demolition of the former Bahamas Customs Warehouse and Festival Place almost complete. Officials have already said construction on the Nassau port will begin at the end of this month.

Managing director of Downtown Nassau’s partnership, Ed Fields yesterday described the Post Office’s demolition as being monumental for the downtown area, adding it was exciting to see that works were finally underway.

“The transformation is commencing. I think it’s just very, very exciting to see that the work is underway. I mean, you can tell from other demolitions like the Clarence Bain building and the port building,” he said.

“You can see the US embassy is under full swing and again, this has nothing to do with us although we’re all working together to deal with certain things... but we’re very excited.”

He added that officials are hopeful the new redevelopments will have a positive impact on the small business community downtown.

“When you look at the port, the demolition of the Post Office building and the Central Bank to come, it’s major works being done for downtown and it can only have a positive impact on the smaller businesses going forward.”

“This is monumental stuff to see this level of transformation. We’ve been crying out for many, many years to revitalise downtown and this is the earnest commencement of that.”

And guess who's getting the lion's share of the heavily padded demolition and debris removal contracts....

I was wondering the same thing...where will all the material go ? you think they will use it to reclaim the land down at prince george dock, for the new port ?