Minister And Mp Out As $2.4m Claim Defendants 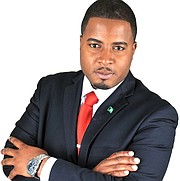 A CABINET minister and current MP have been removed as defendants to a $2.405m unfair dismissal claim brought by the Water & Sewerage Corporation’s former general manager.

Justice Keith Thompson, in a September 18, 2020, verdict ordered that Desmond Bannister, minister of works, and Adrian Gibson, the Corporation’s executive chairman, both be struck out from the legal action initiated by Glen Laville when he was fired following Ernst & Young’s (EY) forensic audit of the water utility.

The judge, who effectively cleaned up confusion arising from efforts by Mr Laville’s attorneys to amend their writ, also removed the Attorney General and Ministry of Public Works as defendants to the former general manager’s claim.

That leaves the Water & Sewerage Corporation, as Mr Laville’s ex-employer, as sole defendant in the case. Justice Thompson, though, resisted what he described as an aggressive bid by Mr Gibson and his attorneys, Harry B. Sands & Lobosky, to effectively knock out the former general manager’s case on a legal technicality.

Mr Laville and his attorney, Sidney Campbell, had applied to “re-add” the Water & Sewerage Corporation as a defendant after mistakenly removing it when they amended their claim in November 2018.

The initial action, filed on May 24 that same year, listed the Water & Sewerage Corporation, Ministry of Public Works and the Attorney General as the three defendants. However, the November changes removed the first two defendants and replaced them with Mr Gibson and Mr Bannister.

Eventually realising their error, Mr Laville and his attorney issued a January 7, 2020, summons to reinstate the Water & Sewerage Corporation as a defendant because without it they would not have a case.

This, though, was seized upon Mr Gibson, who “opposes in the strongest terms” the effort to bring the Water & Sewerage Corporation back in on the basis that this was barred by the Limitation Act.

“Counsel for the executive chairman says that the issue for determination in this matter is whether the plaintiff was engaged as a general manager, a statutory position, under a private contract or a public contract, and whether the duty to terminate was a public duty.”

The Limitation Act stipulates that any legal action against persons executing their “public duty or authority” must take place within 12 months of the action complained of. But Mr Laville’s bid to reinstate the Water & Sewerage Corporation was almost two years after the May 24, 2018, filing of his first writ of summons - thus making the action, at least in Mr Gibson’s eyes - time barred.

However, the executive chairman’s argument was rejected by Justice Thompson, who said “the issue of a statutory [public] duty” that was raised by Mr Gibson should be dealt with at a full trial rather than used to block Mr Laville’s claim from proceeding. He also noted that the Water & Sewerage Corporation had already entered a defence to the action.

“Without being able to re-add the Water & Sewerage Corporation, the plaintiff has no case - period - as his alleged employer would not be a party to the action,” Justice Thompson wrote, granting the application to reinstate the state-owned utility provider as a defendant.

While admonishing Mr Laville’s attorneys to take more care when drafting their applications to the Supreme Court, he ruled: “I am not satisfied that the plaintiff is being mal fide or is seeking to overreach the court.”

The former Water & Sewerage Corporation general manager, in his original statement of claim that was incorporated into the judgment, said he first joined the utility as an assistant engineer in 1987 and remained in its employ until March 14, 2018, when he was unfairly and/or wrongfully dismissed in violation of the Employment Act.

Alleging that he had been eligible to retire, but was terminated without “fair compensation and/or reasonable notice”, Mr Laville said he had been earning an annual salary of $124,070 as general manager together with multiple benefits that included a $5,169 monthly pension payment.

“On or about September 29, 2017, the first defendant’s chairman of the Board of Directors [Mr Gibson] had placed the plaintiff on administrative leave without reason/s and/or unlawfully as such disciplinary powers were only available to the minister of public works as per the Water & Sewerage Corporation Act,” he alleged.

Arguing that this was effectively “constructive dismissal” designed to damage his reputation, Mr Laville claimed he was also denied due process and not given an opportunity to respond to the allegations against him by Mr Gibson and the Ministry of Works.

The former general manager was sacked in the wake of the EY audit, which disclosed how too much politically-motivated interference and the ‘friends, family and connections’ network had undermined basic corporate governance and established protocols. This resulted in multi-million dollar losses and cost overruns that, ultimately, had to be covered by Bahamian taxpayers.

Mr Laville, speaking to The Tribune on the EY report at the time, disputed numerous findings against him while arguing that its public disclosure in the House of Assembly had caused morale at the Water & Sewerage Corporation to plummet.