DIANE PHILLIPS: Who is Potcake? 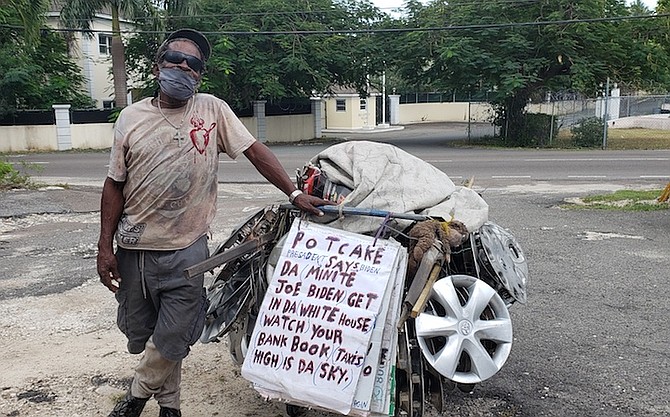 POTCAKE - real name Locksley Thompson - in his familiar pose on the street.

If you live on the eastern side of New Providence or have reason to be there, you see a figure that’s hard to ignore. He’s about 5’8”, sinewy, looks tough as nails and then some and oh, yes, he’s dragging a oversized cart of some kind with hubcaps hanging off the side, a mashed up stuffed animal on the handlebar and a cardboard sign with his thought of the day on the back.

It’s the sign most people know him by and the name he gave himself – Potcake.

What Potcake says and thinks is so captivating that come election time, lots of folks look to the thick black ink on the half-crushed cardboard to see how Potcake is feeling about things, who he trusts, who he doesn’t, what issues are likely to dominate. It’s almost as if this hubcap hawker, this self-styled philosopher has a way of breaking down the complex and getting right to the point, setting the record straight in case the rest of us were just making it too complicated.

After Biden was elected incoming president in the US for example, the sign warned Trump gone, Biden in, taxes going sky high. To make sure everyone saw it, he plastered two signs on his cart that week, one of them spelling Bidden with two ds.

Spelling never matters with Potcake. It’s the thought that counts and with Potcake’s followers – and they are in the tens of thousands – it truly is.

So who is this man? And how did he get to be Nassau’s street philosopher or end up in photos in living rooms all over the world with visitors who stop to take a selfie with him, framing it and giving it prominent placement for all to share their Bahamian experience?

Potcake – his real name is Locksley Thompson – grew up one of ten children, five boys, five girls. The Eleuthera-heritage Thompsons were a proud, if not cash rich, lot and where they lived in Balls Alley was known as the Thompson estate, though estate should not be mistaken for anything resembling grandeur. It did, however, hold a certain dignity and a lot of successful people grew up right there.

Today, it’s said that Balls Alley, tucked between Bay and Shirley Streets just east of the old Shirley Street Theatre with only one way in and the same way out, probably qualifies as the street with the highest concentration of available drugs for sale in the country, not that Potcake would tell you that. For residents, everything that happens in Balls Alley stays right there. There’s almost a hush about the place. But back to our man.

He says despite good family, he never stood much of a chance.

“They criticised me from birth. They teased me. Even when I used to sell The Tribune, I’d buy the girls lunch and they tease me,” he tells me in one of our several conversations as I tried to get to know this oft-bare chested, cart-dragging cultural phenomenon whose “place of business” as he terms it is a well-worn concrete wall along Church Street by St Matthew’s Church and graveyard. It is from there he sells the hubcaps he picks up off the streets, easy inventory to come by given the state of Nassau’s roads, and it is from there he shares his wisdom printed on cardboard.

Why, why did they tease and criticise you? I ask.

I don’t see anything especially unusual about his lips, what you can see of them in a face now crinkled with creases and partially covered by hat, hair and mask, which he removes for a moment so I can get a better look at how it all started. I still don’t see anything especially worth messing up someone’s head for. His right eye, though, that’s a different story. It was stabbed and just about poked out when he was homeless. But we are getting ahead of ourselves.

Despite the teasing and criticism, Potcake made a name for himself. Never one to shy away from physical labour, he became an expert prettying up cars. Worked at a couple of places, doing body work, painting fine vehicles, including showpieces, learned to drive a wrecker. If it had anything to do with a shiny auto that could be made a shade shinier, Potcake was your man.

Sometimes though, maybe a lot of times, the boss would expect you to work long hours, right through the night, he explains.

“They give you rum. Music be goin’, they be jokes, you know, keep it goin’, and you’d get that car ready for the next morning when the customer had to have it on Saturday and then come Monday, they’d forget to pay you everything they owed you, give you a little bit here, a little later if you got lucky,” he said.

So he kept painting and he found a way to make life easier and happier. It was a substance that first came in the form of lines and later crack cocaine. He did it for six or seven years.

Potcake with his daughter Sophie in her wedding gown.

Meantime, he had a “good woman” who stood by him much as she could. Bore him four children, two boys, two girls. His one good eye fills with pride and he smiles when he pulls out the photo of his daughter Sophie in her wedding gown.

The drug habit got bigger and he got more desperate. “I’d go into the drug house pockets full of money and come out pockets empty,” he says candidly. “The drug man take the key and the car and the dope. They get everything you got.”

The day he hit rock bottom was Christmas 1987.

“My mother had made this big turkey and after everybody ate, I saw this turkey just sitting there, took it out to the street and started selling little pieces of the leftovers for 50 cent, a dollar.”

His family flew into a rage. They were done with the brother hooked on dope. They called police and Locksley Thompson was hauled off to Sandilands where he went through rehab and never turned back. He’s been clean for 32 years and 11 months.

“That first high is the best high you will ever get and you keep searching but you never get it back again,” he says. Despite the haze his drug use created, he vividly remembers the effect they had on the street, especially the women in nearby alleyways who would do whatever it took to get the next hit. “It was the height of the drug days and the virus (HIV) was everywhere, killing people I knew. It was bad.”

Once out of rehab, he began thinking deeply about what he was seeing around him. The hand-built, jerry-rigged cart laden with hub caps seemed as good a place as any to hoist a sign and share a thought.

He remembers the first cardboard sign he ever created. Ironically, like his life had changed on a Christmas day before, it, too, was on Christmas.

“It said, ‘Your Christmas turkey smell good.’ And you know what happened? A lot of people passin’ it figured I was hungry and they started bringing me Christmas dinners. I had so much food that day.”

There have been many days since then when Potcake felt low but just as the wave of sadness sweeps over him, a stranger comes by and lifts his spirits, like they did that Christmas day long ago. He will forever be grateful to one man, David Lunn, who helped support him in his writings, making sure he did not go hungry. He is grateful to Tribune publisher Eileen Carron who used to stop by his “place of business” on the wall, read the signs, nod her head, smile and carry on, making sure The Tribune made space for Potcake’s thought of the day.

The years of ups and downs have made Potcake rugged around the edges but surprisingly tender on the inside, somewhat surprising for a man who spent eight years living on the streets after his house burned down.

“Sometimes when it was cold out and you didn’t have a blanket and no cardboard, it was hard, you wake up and you got bites all over you, your body, face, eyes,” he said. There were times, though, when sleeping on Potters Cay dock or Montagu would be better than listening to the “rowin’, shootin’ and all that stuff” in the Balls Alley, Okra Hill area.

“It can be peaceful out there,” he explains. It can also be filled with pounding, freezing rain and fear. “One night I fall asleep in front of Cycles Unlimited (Mackey Street) and I feel a blow to my head, blood pouring out of my eye.” Two young men were running away. They stole his wallet, the few dollars he had and the sight in his right eye. He spent a month in the hospital. That was nine years ago.

Potcake, who also suffers from diabetes, finally does have a roof over his head though donors are anonymous. He suspects he knows who started the gofundme page and helped rebuild his house recently, though he still does not have electricity. He speaks highly of his MP in Freetown and the young man who assists with constituency work.

This week, he planted a coconut tree and a Lignum Vitae, putting his roots down not far from where he was born, raised, went right, went wrong and returned to tell us all a thing or two about life.

As for those signs, that wisdom painstakingly written in thick black or red ink on cardboard, he’s had a few special ones over the years. One of his favourites came from the referendum on gaming when then Prime Minister Perry Christie insisted that he had no horse in the race.

“He don’t have no horse in the race, no, but he got one jockey,” Potcake wrote.

And his views on the upcoming local elections? He shared his thoughts, but that’s a secret between us. You’ll just have to wait for the scrawl on the scroll brought to you by a man who was born on 9/11 some 67 years ago and is still making history one sign at a time.

All Potcake Wants for Christmas is a Little Bit of Light

He’s humoured us, lifted our spirits and made us stop and think for 20+ years. Isn’t it time we gave him a little something to smile about? All Potcake wants for Christmas is electricity.

“I see the people up and down the street and they got their TVs on in the evening and they laughin’ and all I got is my chair, my cot and my battery radio so I could listen to gospel all night sometimes till 2 or 3 in the morning.”

When it’s time to fall asleep, he moves the chair away from inside the front door and positions his mattress there to catch whatever breeze there is. Electricity would also mean a fan.

BPL says he needs a document showing he has rights to the property, a deposit of $250 and evidence of the ability to pay. We are working on it.

For Pete's sake lady, if you're really that lonely you should find your own two-legged potcake to snuggle up next to at night. Didn't have to read a word to tap out that one. LOL