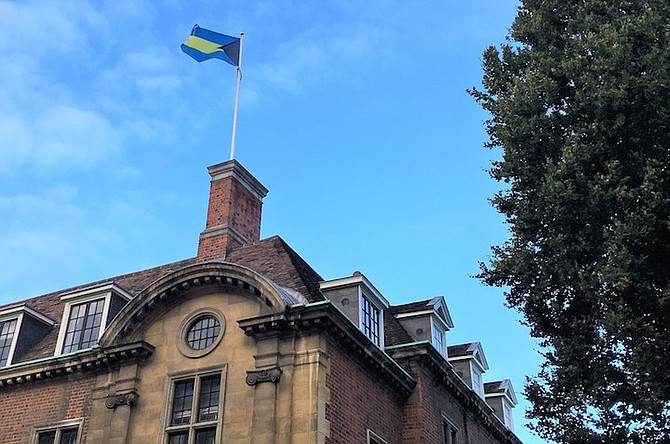 THE BAHAMIAN flag flying over St Catharine’s College in Cambridge.

ST Catharine’s College in the United Kingdom flew the national flag of The Bahamas above Cambridge city centre on October 1 to signify the start of a programme of activities celebrating Black History Month.

The flag commemorates the college’s connections with The Bahamas thanks to its earliest known black student, the Hon. Alfred F Adderley, CBE. Mr Adderley is a former parliamentarian, judge and noted Bahamian educator. He died in 1953.

St Catharine’s took the opportunity to fly The Bahamas flag after a recent research project found that Mr Adderley arrived from The Bahamas to study law in 1912, making him the earliest black member of the college on record. Following graduation and legal training, Mr Adderley returned to The Bahamas to practice law, where he distinguished himself in court and became a leader in national politics, religion and sports.

Professor Sir Mark Welland, master of St Catharine’s College, said: “This Black History Month, St Catharine’s College is starting the new academic year by embracing over a century of black students, staff and fellows contributing to our academic community. We are rightly proud of our black history, first recorded in 1912 with Alfred F Adderley, who contributed so much to life at St Catharine’s and in The Bahamas. I’m delighted that the raising of the Bahamian flag today in his memory launches a programme of activities that will enable us all to reflect and build on these important historical experiences throughout October and beyond.”

The Adderley Prize was established by St Catharine’s following a bequest from Alfred and his son, the late Paul Adderley, who also studied at the college and also served as acting Governor-General of The Bahamas. The prize is still given annually to recognise St Catharine’s law students for outstanding performance in their exams.

L’myah Sherae, who was graduated with a master’s degree from St Catharine’s and whose research investigated Alfred F Adderley’s life, added: “Delving into the college’s archives was a very powerful experience for me. I was overwhelmed and completely inspired by the achievements of Alfred F Adderley and the other black students at St Catharine’s who followed him.

“Knowing that I also followed in their prominent footsteps, as a black student at St Catharine’s, was incredibly motivating. I am thrilled that my research inspired the college to fly the Bahamian flag in honour of this rich history.”

The national flag of The Bahamas flew from the college’s flag pole on October 1 and will fly again on October 31, marking the start and the end of Black History Month.

When is white history 15% month, just asking because no one seems to care about White Bahamian history month.