Golden Girl urges next generation to pick up the baton 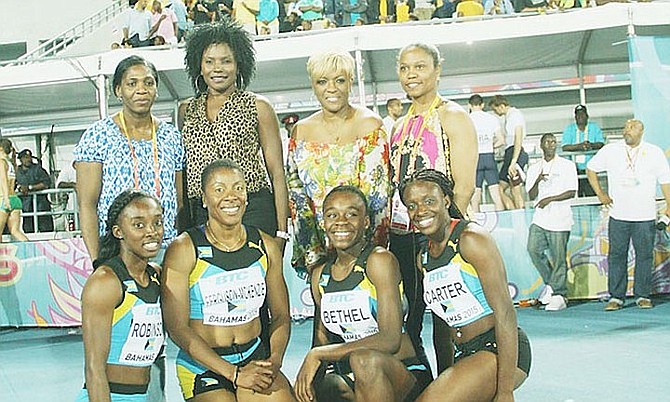 AS the last of the Golden Girls to compete on the women’s 4 x 400 meter relay team, sprinter Debbie Ferguson-McKenzie said it’s disappointing that the Bahamas wasn’t able to continue the trend of producing more female athletes to compete at the major international track and field meets.

Six years after teaming up with Savatheda Fynes-Coke, Chandra Sturrup, Pauline Davis-Thompson and Eldece Clarke to win The Bahamas’ first gold medal in the women’s 4 x 100 metre relay at the 2000 Olympic Games in Sydney, Australia, Ferguson-McKenzie officially hung up her running shoes in 2016 after a car accident,

But looking back over the past 20 years since their historic performance, which was celebrated on Wednesday, September 30, Ferguson-McKenzie admitted that the young ladies who followed in the footsteps of the Golden Girls just didn’t have put as much importance on competing in the relays as they do in their individual events.

“I think the young ladies don’t have the mentality where they want to run the relay,” she stressed. “What I think also think is missing is what we had when we competed. I remember specifically where we had Desmond Bannister as our president (of the Bahamas Association of Athletic Associations).

“I don’t remember exactly who was it, but one of our members wanted to go on the circuit to make money, which was our job back then. But Mr Bannister insisted that we run the relay. He put us into a camp to get ready for the World Championships in 1999 (in Seville, Spain) and we won the gold. We came back in 2000 and repeated as the feat as the Olympic champions.”

Ferguson-McKenzie said the BAAA and the Bahamas Olympic Committee have to ensure that the athletes, not only the women, but the men as well, prepare themselves to compete at the World Championships and the Olympics in both their individual events and as a member of the relay team.

“When you win a medal in an individual event and you come back and win one in a relay, that’s a doubled plus, not a negative,” she insisted. “At the end of the day, you may never think that you have a team that is the best, but you never know what will happen.

“We’ve seen where countries didn’t know what to exact when they compete in the relay, but they came through in the end. I just think we need to teach this generation that they have no choice, but to do it for the country, the people and for the athletes. I hope they understand that.”

Since emerging on top of the world in Seville and Sydney, The Bahamas has only been able to generate a gold and silver as well as a pair of bronze medal at any of the major international meets around the world.

The first came at the Commonwealth Games in 2002 in Manchester, England, as the quartet of Tamicka Clarke, Fynes-Coke, Sturrup and Ferguson-McKenzie surged to the top of the podium with Jamaica and England settling for the silver and bronze respectively.

After clinching the bronze in the 200m at the World Championships in Berlin, Germany in 2009, Ferguson-McKenzie anchored the combo of Sheniqua ‘Q’ Ferguson, Sturrup and quarter-miler Christine Amertil to silver as they finished behind Jamaica and ahead of Germany.

The year before at the 2008 Central American and Caribbean Championships in Cali, Colombia, Kristy White, Clarke, Sturrup and Ferguson-McKenzie came out with the bronze behind the gold from Trinidad & Tobago and the silver from Colombia.

And in 2013 at the CAC Championships in Morelia, Mexico, the team of Tyler Carter, Cache Armbrister, Ferguson-McKenzie and Nivea Smith picked up the other bronze as Jamaica captured the gold and Trinidad & Tobago earned the silver.

From that time to now, Ferguson-McKenzie said The Bahamas has been blessed with a number of top notch competitors, who had the ability to keep the legacy of the Golden Girls alive, but they were never pushed to their limit.

“In my humble opinion, someone might say they are a leader, but they are not,” she insisted. “We had leaders in the past, who didn’t get the maximin out of the competitors. In the case of the Golden Girls, we took it upon ourselves to go to Pauline Davis home and we practiced together and do all that stuff.

“We brought tickets, went to her home practice and gelled together and got to know each other. Our leaders encouraged us to do it. I don’t think this generation of competitors are going to do that, but I think someone in administration have to teach them to do it. It’s like having your parents, who teach you how to do it right.”

Not taking anything away from the previous core of competitors whom she competed with and those who followed her, Ferguson-McKenzie said with the current crop of competitors like Shaunae Miller-Uibo, Tynia Gaither, Anthonique Strachan, Devynne Charlton, Pedrya Seymour and Breanne Bethel, just to name a few, Ferguson-McKenzie said the administrators will have to find a way to get these athletes to come together and compete as a unit to make the return to prominence in the future.

“It’s about training. It’s not all about having the four fastest people. History have proven that it’s about getting the stick around. Practiced makes perfect,” she pointed out. “Obviously, we have the women, but we just have to keep track and try to find a way to get them together after this coronavirus pandemic.

“You can’t just expect to get a gold medal and don’t work for it. It’s not just going to happen like that.”

Ferguson-McKenzie said over the years, there have been a number of competitors like Tamar Cherubim, Shandria Brown, Marcia Dorsett, Dewana Wright, twin sisters Tamara and Tavara Rigby, who had the potential to make their contribution at the next level, but they didn’t get there.

So 20 years later, Ferguson-McKenzie said it would be interesting to see who will emerge as The Bahamas makes the trek towards the next Olympics, which was delayed this year because of the coronavirus pandemic to 2021 in Tokyo, Japan.