Stateside: Even For Trump This Is All Starting To Look Completely Ridiculous 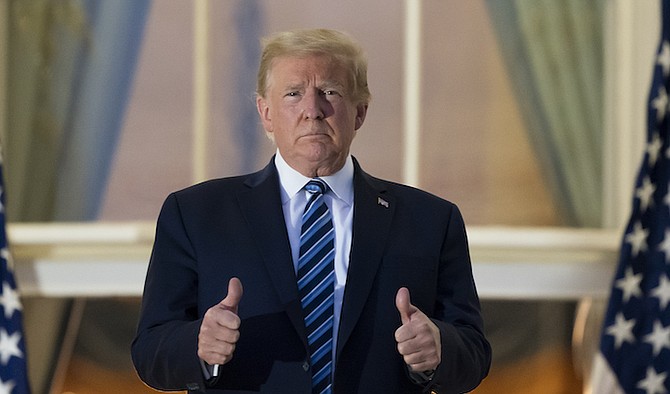 No one in Washington has ever witnessed anything like what is happening with and to Donald Trump these days. The US President, long suspected of sociopathic behaviour and tendencies by mental health professionals, seems to be lurching out of control in an increasingly desperate attempt to cling to office.

Political commentators, having read niece Mary Trump’s and other memoirs, opine about hearing Trump’s father’s voice reminding him that there are only “losers and killers” and the President’s many critics accuse him anew of trying not to displease his long-dead father.

Other recent Presidents, notably George W Bush, have seen their relationship with their father become the subject of much speculative scrutiny. It was the same with Bill Clinton and his mother, and with Barack Obama and each of his parents.

But those cases were nothing like this. Those Presidents did not invite the kind of unwelcome attention Trump has long attracted with his bizarre behaviour.

It’s all playing out against the background of his having contracted the coronavirus and spending last weekend at the military hospital in suburban Maryland where Presidents go for treatment.

Even while hospitalised, Trump insisted on having the Secret Service drive him around so he could wave to some of his supporters who lined the streets outside the hospital compound. He had clearly ignored the advice of his physicians and risked the health of those who serve him. Trump’s behaviour was blatantly irresponsible and served to blunt some of the genuine sympathy many people felt for his illness.

And it appears that Trump’s illness might be serious, but you’d never know it from the medical information shared so far by his doctors. There’s no hard evidence that the President may actually be quite ill with the virus, but several TV medical experts think the treatment he is receiving suggests exactly that.

Since Trump and the White House have already been caught in nearly 20,000 public lies, no one really believes anything his spokeswoman or anyone else has to say about his medical condition.

The Secret Service, meanwhile, is suffering a depletion in its ranks due to COVID-19. Complaints about the President’s careless behaviour are beginning to seep out from around the edges of the curtain of stolid, unquestioned loyalty to the Commander in Chief which has been a Secret Service hallmark since the Service was directed to protect the American chief executive after President William McKinley was assassinated in Buffalo in 1901.

The coronavirus has infected virtually every facet of the US presidential election, now mercifully less than a month away. Trump’s own health, and that of his wife and many of his closest advisers, is clearly at risk. Many White House staffers have now moved to work from the safety of their own homes.

And most significantly, federal relief for the millions of virus victims is stalled by petulant presidential fiat.

“I’ve told Congress to wait until I’m re-elected and then we’ll pass a good relief bill,” Trump said after returning prematurely to the White House to resume his political campaign for re-election.

Trump suggested the Senate focus on confirming his nominee to the US Supreme Court. Judge Amy Coney Barrett, herself a summer victim of the virus, may now be immune to the ravages that have beset many others at last weekend’s careless, foolish outdoor, largely mask-free ceremony that served as the stage for Trump’s grand announcement of her nomination. Or not. But at least a couple of Republican senators who did attend and serve on the critical Senate Judiciary Committee are now quarantining after contracting COVID-19.

Trump really does make it easy to second-guess him. At the beginning of this year, he was still riding a hot economy to robust ratings and he looked like a formidable candidate to win a second term in office. The virus has thrown a haymaker punch at his chances, but how different might things be if instead of trying to lie about the seriousness of the virus, he had actually led the nation by telling the truth and honouring the science of the medical professionals who staff the CDC and other federal health agencies?

This man is truly a figure out of a Shakespearean play. He carries within himself both the charisma and brilliance of the gifted demagogue and the seeds of his own self-destruction. Since the beginning of his presidency, he has indulged in obviously false statements and actions that have the predictable effect of turning off some of the very voters whose support he enjoyed in 2016 and will need again next month – people like seniors and suburban women.

For decades, Trump’s life played out on the society pages and in the gossip columns of the New York tabloid newspapers. This was obviously a man of spectacular indulgence, most clearly evidenced by his consistent proclivity to do and say exactly what he pleased.

Many observers felt he would hate the presidency, since American chief executives are expected to act and speak with circumspection, since they are the leaders of the free world and all.

But no. Trump took office and has only intermittently ceased indulging in doing and saying what he pleased. Since he’s no longer a tabloid staple nor a reality TV star, people actually care and pay attention to what he does and says.

It’s undone his presidency, and maybe it’s undoing his health and life too, right before our eyes.

Waiting in the wings

While Trump is suffering in the polls and more generally in the court of public opinion, his three most prominent cabinet members are taking different paths as they try to successfully navigate the chaos.

Attorney General William Barr, enabler in chief to Trump, appears to have no abiding personal political ambitions, so he smugly posed for pictures and sat down with the Washington Post for a big weekend feature. Asked to assess his performance since becoming Attorney General for the second time on Valentine’s Day last year, Barr said: “I’d give myself high grades. But since we all have foibles, I’m not quite sure it’s an A-plus.”

Both Vice-President Mike Pence and Secretary of State Mike Pompeo plan to run for President in 2024, either at the end of Trump’s second term or against a President Joe Biden whose tenure will be blighted with the public health, social, economic and political consequences of the present, disastrous administration.

Pence has fashioned himself as the ultimate loyalist and, for most voters, that’s basically what they have learned about him. He is doggedly, unflinchingly loyal to the President and to Pence’s strongly-held religious faith. Pence’s open faith allegiance and close ties to religious and evangelistic conservatives have essentially served as his dowry in the political marriage he has forged with Trump.

Pompeo, both at the CIA and at the State Department, has been clever in padding his resume while earning and maintaining Trump’s confidence. He has frequently visited domestic GOP strongholds as Secretary of State, often at the end of overseas trips. The domestic side trips can only burnish his credentials for a future run at the presidency.

Pompeo may also rival Pence in religious conservatism. He proudly quotes a New York Times story that said “no Secretary of State in recent decades has been as open and fervent as Mr. Pompeo about discussing Christianity and foreign policy in the same breath.”

It’s hard to know what the political landscape will look like in four years. But we know who two of the protagonists are likely to be.

The Vatican denied Pompeo’s request for an audience with Pope Francis this week, saying the pope would not see Pompeo in the midst of the ongoing American election.

“Yes, he asked,” Secretary of State Cardinal Pietro Parolin told The Associated Press as Pompeo is in Europe for a weeklong visit. “But the pope had already said clearly that political figures are not received in election periods. That is the reason.”

Pompeo will still meet with Parolin and other top Vatican officials during the visit, but the refusal was seen by some as the latest example of a political rift between the United States and the Vatican. During a religious freedom conference this week, Pompeo issued a strong denouncement of a deal the Catholic Church signed two years ago with China related to the appointment of bishops, which it is considering extending.

Trump is an unhinged man with a deeply flawed character who has hijacked the Republican Party. He will promote and refuse to condemn any group that supports him. Trump is all about Trump yet millions of Americans are even now prepared to vote this man back into power at the risk of permanently damaging their cherished democracy. Many Republican senators and governors have shamelessly turned a blind eye to the blatant misdemeanors of this "fake" President. Trump will lose the upcoming election because he has not understood the extent to which he has alienated decent Americans. This is no longer an election between Republican and Democrats - it's about Right versus Wrong. Sadly Trump's cult following has become blind to his failings and lack of integrity but I am convinced he will lose badly because he has surely lost many more voters than he has gained, particularly over his gross mismanagement of the pandemic.

You need to stop reading as gospel Charlie Harper's rubbish that is being spoon fed to you by The Tribune's owners. Suggest you do some independent research of Harper's background - he's the far left's equivalent of the far right's Rush Limbaugh with more baggage than most politically bent writers can accumulate over a long life time. LOL