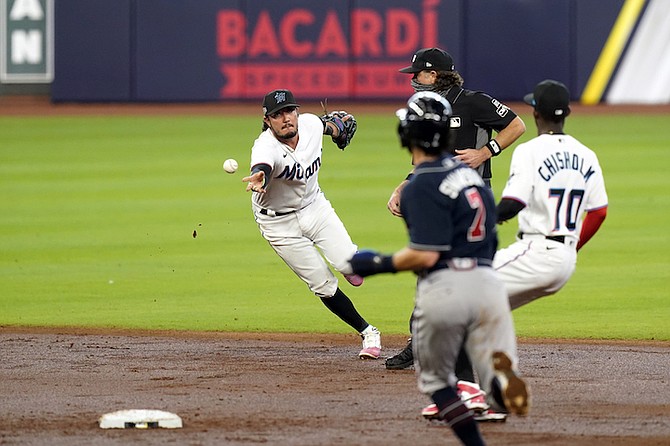 Jazz Chisholm made his Major League Baseball postseason debut in what turned out to be the final game of the season for his Miami Marlins as they were eliminated from the playoffs.

Chisholm started at second base and hit sixth in the lineup of the Marlins’ 7-0 loss to the Atlanta Braves yesterday in game three of the National League Division Series at Minute Maid Park in Houston, Texas.

He became just the second Bahamian born player to play in the MLB postseason following Ed Armbrister’s run with the Cincinnati Reds in the 1970s.

Chisholm finished 1-3 with a walk, but the entire Marlins lineup struggled offensively with just five hits on the afternoon.

His first postseason hit of his career came in the bottom of the ninth inning, a double to left centre off the Braves’ Shane Greene. Chisholm’s double hit off the top of the wal, inches away from what would have been a solo home run. The Marlins challenged, but the call on the field was upheld by the umpire.

He walked in his first plate appearance and eventually advanced to third after a hit and run from Miguel Rojas and a groundout from Magneuris Sierra. Chad Wallach struck out to leave Chisholm stranded at third to end the second inning.

The Braves erupted for four runs in the third inning to take control for good and the Marlins failed to capitalise on several scoring opportunities.

Chisholm’s second plate appearance came in the home half of the third inning with the bases loaded, but the Marlins again left runners stranded with an opportunity to score. With two on and no out, Jesus Aguilar and Brian Anderson both struck out before Garrett Cooper walked to load the bases.

Chisholm’s hit traveled 105.5 mph, the hardest of any hit on the afternoon and the second hardest hit ball of his young MLB career, but Braves second baseman Ozzie Albies was in a position to field it and close out the inning unscathed.

The Braves would go on to score one run in the fourth and two runs in the fifth for the game’s final margin.

Chisholm was moved into the starting lineup and Jon Berti, who had started at second in each of the four previous postseason games, moved to right field.

Marlins manager Don Mattingly told MLB.com that he had confidence in Chisolm to have an impact and expressed excitement at his future impact with the club.

“Jazz is a different little dude, just his way of thinking, but I think he’s going to be really good. I think he’s going to have to make sure he continues to mature in his work, especially at the plate [and in] his discipline and work more than anything else,” Mattingly said. “He sees the ball really well. He sees it early, which is a trait of guys that really end up really hitting that are able to [see] balls so quickly and recognise. So his energy’s been great, he works extremely hard. We just got to make sure it works consistently, works smart.”

Chisholm has traditionally played shortstop but has played predominantly at second for the Marlins since his callup.

“Usually, those guys in the middle can play just about anywhere. Jazz has come up as a shortstop. I’m sure he’s played some second at some point somewhere in his life. You play baseball, you play all over. Guys like him, they’re so athletic, quick … second base is probably even easier for him,” Mattingly said, “The reasons, probably, he’s at short mostly coming up is he’s got a cannon, he’s got an arm that plays at short and obviously that bat. That power potential there is a guy that you expect to play short. It’s a game-changer in that respect.”

Chisholm made Bahamian baseball history with several milestones this season. The Marlins’ No. 4 prospect and No. 61 on MLB Pipeline’s Top 100 list, was expected to start the season with the Marlins’ AAA affiliate, the Wichita Wind Surge of the Pacific Coast League.

The COVID-19 pandemic canceled Minor League Baseball in 2020 and shortened the Major Leagues to a shortened 60-game season. The Marlins were one of the teams hit by the pandemic early in the season and had the highest roster turnover of any team in the league.

The 22-year-old Chisholm made his historic debut on September 1 against the Toronto Blue Jays at Marlins Stadium. He entered the game as a defensive substitute in the top of the eighth inning for Rojas and officially became just the seventh Bahamian to play in the major leagues.

On the very first pitch he saw defensively, Cavan Biggio hit a line drive shot directly to Chisolm who fielded it for his first MLB out. He discussed the thrill of the callup with reporters following his debut.

“Everyone was telling me they were so proud of me and that I’m an inspiration to them and some of them were the guys that I was looking up to when I was younger so it touches me that I can touch anyone’s heart in the Bahamas. We know how the struggle has been back home for the past year with COVID-19 and I got called up to play on September first which makes a year since Hurricane Dorian passed, so all of that made it a special time for me,” he said, “Having my debut in Miami the closest place to home when I can’t be home, I’m always at a loss for words when I think of it. Getting called up to a playoff potential team, and I believe we’re going to make the playoffs, it’s just amazing. I think the whole Bahamas are Marlins fans now.”

Chisholm’s breakthrough at the plate came on September 9 against the Braves when he recorded his first major league home run, RBI, triple and multi-hit game.

He became the third youngest Marlins player to have a game with a home run and a triple. The only players to do it at a younger age were Giancarlo Stanton and Jeremy Hermida.

Chisholm had his best game of the year in the regular season finale when he blasted his second home run of the season and finished 2-4 with three RBI and scored two runs.

The Marlins were one of the most improbable stories in the MLB this season. They were the worst team in the National League a season ago at 57-105 and returned in 2020 to finish 31-29 for their first winning season since 2009 and earn their first playoff berth since 2003.

Adversity hit the club early in the year when they were hampered by a COVID-19 breakout which forced a constant roster turnover throughout the season. Eighteen players tested positive for COVID-19 and the Marlins had more transactions than any other team in an effort to fill roster spots. Their 16 season playoff drought was the second-longest active streak in the majors.

Once they reached the postseason, the No.6 seeded Marlins advanced to the NLDS with a two game sweep of the No.3 Chicago Cubs in the Wild Card round on the road at Wrigley Field in Chicago, Illinois.