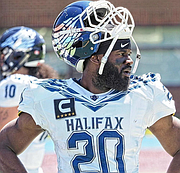 Eugene McMinns will have the opportunity to continue his football car on the sidelines after he joined the coaching staff of a Canadian collegiate programme.

A former wide receiver in his collegiate career with the Holland College Hurricanes and Acadia Axemen, McMinns said he looked forward to developing young players at the position.

“Grateful to have the opportunity like this to give back to the game to mentor young football players to being the best they can be on and off the field,” he said in an Instagram post. 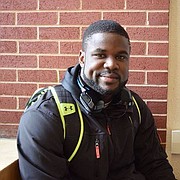 The Tigers are one of four teams that play in the Atlantic Football League and returned to competition in 2010 after a 34 year hiatus. In 2016, the team won the AFL championship with an 8-0 undefeated record, and again went undefeated in 2018, capturing 2 AFL championships in three years.

McMinns began his collegiate career with the Holland College Hurricanes. In two years with the Hurricanes, McMinns developed into one of the team’s top playmakers as they claimed back-to-back Atlantic Football League titles in 2013 and 2014. He was named the Holland College male Rookie of the Year as he finished with 21 receptions for 441 years and two touchdowns. He was also an impact player on special teams with 11 returns for 189 yards.

In his second season, McMinns caught three touchdowns, but saw his season cut short when he was sidelined due to a head injury in the AFL semi-finals.

After two seasons, he transferred to Acadia. In five games he finished with five catches for 101 yards and one touchdown. He had a breakout game with two catches for 48 yards and a touchdown against McGill. And he also led Acadia with three catches for 53 yards in his team’s 27-0 win over Huskies. He spent the 2015 season with the Axemen but left the programme the following year.

In his final collegiate season, McMinns was a part of the Bahamian connection that helped the Axemen win the 2017 Atlantic University Sports (AUS) championship title. At the conclusion of his career he finished second on the Axemen in receptions and yardage with 29 catches for 346 yards and three touchdowns. McMinns ended the regular season ranked third in all-purpose yards in the AUS with a total of 1,232 yards and 154 per game. He was also the second leading punt returner in the division with an average of 14.3 yard per return and one 94 yard touchdown. He also returned 19 kicks for 437 yards and an average of 23 yards per return.

Following his collegiate career, he participated in several combines in an attempt to work his way into the Canadian Football League and also played at the semi-pro level with the Halifax Harbour Hawks.