DIANE PHILLIPS: Will these 36,000 voices be heard in the argument about oil? 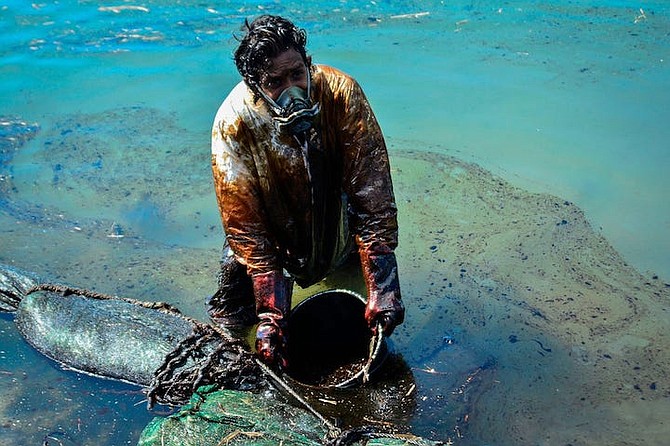 A MAN scoops leaked oil from the vessel MV Wakashio, belonging to a Japanese company that ran aground near Blue Bay Marine Park off the coast of south-east Mauritius on August 2, 2020. “As soon as you go south of Mauritius, you start smelling the oil. Within a short time you have a headache and, if you are near the coast, you quickly become ill…”

WE are so busy glaring at COVID-19 we are about to be blindsided by something that could take a greater toll on The Bahamas for decades to come – a seemingly imminent plan to drill for oil.

For years, any talk of drilling for oil felt eons away, like a visit from dreaded in-laws that still had a chance of being cancelled.

Now, Bahamas Petroleum Company (BPC) has said it plans to start exploratory drilling as soon as December. There are those who are not convinced it will be that soon. Drilling for oil is not like drilling a hole in drywall to hang a picture (though you could probably punch the drywall with a #2 pencil). The point is, it’s expensive. Whether BPC has the ability to drill this year or next is not the important question.

The important question is whether oil drilling should be permitted at all.

Those who think not point to the risk factors of an oil spill and what one spill could do to The Bahamas. They point to the fact that after the Exxon Valdez spill in Prince William Sound off the coast of Alaska, Exxon sent in a team of 10,000 people over three years to clean up. Yet 20 years later, the fishing industry in Alaska was still suffering. They point to the fact that they do not know what, if anything, is in it for Bahamians and yet the country is on the brink of taking one of the greatest risks it has ever considered.

They point to the fact that when the Deepwater Horizon gushed 134 million gallons of oil covering the Gulf Coast in April 2010 and impacting the coastlines of 16 states, a spill 18 times greater than the Exxon Valdez, it wiped out a $3.5 billion industry. Tens of thousands of fish washed ashore. TV footage captured black, oily water and brown beaches. Videos zeroed in on birds that lay dying because the heavy, dark oil on their wings prevented them from taking flight.

They point to the fact that years later, marine life is still showing up with skin lesions.

They also point to what feels like an absence of transparency. They say profits derived would apparently not be going into a sovereign wealth fund, but to shareholders who purchased their piece of the Bahamian treasure on the London Stock Exchange.

They point out that while the world is moving toward renewables, The Bahamas stands to risk its pristine environment for the sake of producing more environmentally disastrous fossil fuels, mocking its respect for the environment and comparing it with Donald Trump’s suggestion that coal miners go back to work in the mines.

They note that a year after the Equinor spill in Grand Bahama when the tops blew off crude oil storage tanks during Hurricane Dorian flinging 558,000 barrels of oil into the pine barrens and surrounding waters, a speck of a spill by global standards, and even with a team actively engaged, experts say the mess is only 10 percent cleaned up.

Finally, they point to the “economic lunacy” of risking all when the price of oil has tanked in recent months and countries already rich in it can’t find a market at the price they want.

In the end, they say, the reasons for drilling make far less sense than the reasons not to.

Leave whatever oil there is right where it is, they say.

You can form your own opinion, judge for yourself what you think The Bahamas government should do. Should it cancel a licence, postpone a start date? What would be the cost of doing so? Create a sovereign wealth fund just in case?

And by the way, what would be the political cost of not doing so?

Recall the referendum of 2013 when Bahamians voted 5-3 against legalizing gaming (an opinion I did not share) and the following year the Christie administration ignored the will of the people, calling the referendum a straw vote.

Voters’ memories may not be as short as leaders hope.

In the following election, the FNM opposition swept to victory in a near wipe-out, winning 35 seats to 4.

How is that relevant to drilling for oil and the people’s will. Check out the petition on Change.org. It is addressed to the Prime Minister of The Bahamas and starts “We are at a pivotal point in Bahamian history. The Bahamas Petroleum Company (BPC) has announced its intention to begin offshore oil drilling in our pristine waters in a matter of months. Prime Minister Hubert Minnis has one last chance to protect our nation’s economy and precious natural resources from the devastating ravages of oil pollution before it is too late.”

Here, among the words of warning on the petition started by a group calling itself Our Islands, Our Future: “It is clear that neither BPC or The Bahamas government could fund the level of emergency response and cleanup needed to mitigate a large-scale disaster. The Deepwater Horizon spill cost $65 billion – more than five times the GDP of the Bahamas. Were such a disaster to take place it would pose an existential threat to The Bahamas, directly threatening the livelihoods of the vast majority of Bahamians.”

As of this writing, more than 36,600 people have signed that petition.

On September 18, the headline and the words in this column reflected the anger and rage many Abaconians felt one year and two weeks after Hurricane Dorian slammed their island. They were mad at the ongoing theft, the lack of attention to security. They were scared and they were running scared.

An economy based in large part on second homeownership was threatened by those owners being too afraid to come back when supplies they sent for rebuilding were being stolen before they could even be used in reconstruction. One business had been broken into or stolen from six times since January. Since then, and with attention drawn to the subject from many sources including the outspoken and highly productive head of the Abaco Chamber of Commerce Ken Hutton throwing his hands up in the air, there is a bit of brighter news to report.

More attention is being paid to security though it is far from perfect, according to sources. And there is a significant investment that is giving Abaconians a ray of sunshine - a large shopping centre in Marsh Harbour being built by Sebas Bastian. Said one Abaconian: “At least someone believes in Abaco. It gives you a feeling of hope, that there will be a future for us after all.”

Let’s not forget that an even larger project is on the horizon for a cay just outside Marsh Harbour. With Bahamas-based Sterling Global as a partner, Montage says its $300m resort and residential community on the recently renamed Montage Cay, formerly Matt Lowe’s Cay, will be the jewel in the crown of its global luxury offerings in a setting that is postcard picture perfect.

Thank you for questioning the wisdom of drilling for oil in The Bahamas. We need to have the vision and regard for the science that says it is a very bad and all too risky proposition.

Who says the science says oil drilling is very bad? FYI sea level is not rising according to this PhD scientist who has looked at the tide gauges. Enough hysteria!

Dr, would you mind posting your data so that it can be peer reviewed, please?

Thank you for your Abaco update! It helps everyone with the recovery, especially those of us who don’t use Facebook.

We want oil, we use oil and all of its byproducts and many things produced from it, but no don’t drill in our yard.

Keep the drilling and oil spills in some other country.

Typical a##holes, and no doubt that those squawking the loudest are some of the biggest consumers, ie big house and private yachts and jets.

It really sickening to hear these hypocrites preach their garbage.

If they really wanted to keep the environment clean they would first sell their cars, boats and planes, and ride a bicycles.
They would downsize to modest homes and reduce power consumption and go as green as possible.

Climate change, green initiative and religious followers all have one thing in common. They love to profess their beliefs! But have you ever met a religious person who truly lives by the code. Have you ever met a climate change supporter who has stopped flying and parked their car? Or how about a believer in simple recycling and green energy who is really committed to their cause ( without citing budget).

Good luck in finding anyone anywhere who would puts their money where their mouth is.

David Suzuki has a 6500 sqft house in one of the most prestigious parts of Vancouver bc Canada. How green is that?

You hypocrites need to shut up!

Chucky is obviously one of those who reads fake news instead of real news, 80 Million Gallons of Oil...a spill Larger Than Exxon Spill, is pouring into Caribbean right now near Trinidad and Tobago.

And Venezuela’s broken oil industry has been spewing crude into the Caribbean Sea for years as well. Venezuela’s once powerful oil industry has literally fallen apart, with years of mismanagement, corruption, falling prices and a U.S. embargo imposed last year bringing aging infrastructure to the brink of collapse. As the government scrambles to repair and restart its fuel-processing capacity, analysts are warning that ruptured pipelines, rusting tankers and rickety refineries are contributing to a mounting ecological disaster in this failing nation. The oil is essentially turning the area into a “dead, contaminated sea.”

And they think the same people who can't manage a power plant oil leak, can manage drilling for oil!? C'mon it is literally the definition of insane.