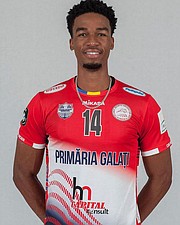 EUGENE Stuart is on the move to a new country and a new club in the second season of his pro volleyball career.

Stuart signed with Arca Galati of Romania’s Divizia A1, the top league in the country.

The 23-year-old middle blocker spent last season with Karelian Hurmos in the Mestaruuliiga league in Finland before he reached a long-awaited deal with the Romanian club to play in the CEV Champions League. “My agent had proposed to me other teams in Europe and to no avail. He sent my video to a coach in Romania who said that he was interested in me and that he wanted to make an offer for me.

“He thought I possessed the potential as a player and that is how Romania came into the equation of teams,” Stuart said.

“My goal for the season is to enjoy the experience. I am playing in the champions league so I want to make the best out of it.

“I want to play the best that I can. I want to enjoy being in a different country. I know it is a big opportunity and I want to stay healthy.”

The 2015 St Augustine’s College graduate went on to star for the University of Charleston, West Virginia, and graduated with his bachelor of science degree in sports business.

He added that he drew inspiration from Bahamian pro volleyball players that came before him.

“Everybody just thinks about basketball and track and field, but they can also look at playing volleyball,” Stuart said.

“If me and Byron and Shonari can do it, they can do it too,” he added.

With everything that’s going on, we’re really glad that The Tribune is keeping us up-to-date on professional volleyball in Finland and Romania. Thank you, Tribune, we are so grateful!