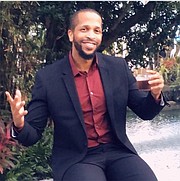 HOPING to have the same good fortune as his sister Nicole Lightbourne who was able to find her biological family, adopted brother Nathan Lightbourn is now on the same journey as his sister.

Adoption is a topic not often talked about in The Bahamas. Yet there are hundreds of children in the country who have either been left orphaned after the deaths of their parents or were given up by their biological parents.

Those given up for adoption by their parents end up like Nicole on a quest to find them – a reunion that unfortunately never happens for some.

Yet Nathan is hopeful that in sharing his story like his sister who went public with her adoption journey in our paper last week is hopeful his quest yields a similar result as his sister.

He believes there could be a chance her biological mother or extended family learns of his plea and contact him with information.

“I was born October 7, 1981, in Nassau at Princess Margaret Hospital. My birth mother left me at the hospital. The nurses named me baby Paul and from there my life began."

Nathan was later adopted between 1981-1982 to what he describes as a “great family.

Nathan Lightbourn as a baby.

Like his sister, Nathan does not know much about his birth mother or biological family.

“My mother name was Debaroh Paul. She lived in the Pinedale area in 1981. She also had child before me, that is all I really know about them.

“Life as an adopted child was great sometimes but I always wondered who I came from and how was they like,” he said.

In 1987, Nathan and Nicole became siblings through their adopted parents. They have grown close and have been the family each other has always been missing.

“She was also looking for her family and she inspired me to do the same. We have a great bond and all look out of each other. We got bless with two godly parents who gave us the best chance in life. But like my sister I had anger issues and I also have connections issues. I am just seeking closure to my life,’ he said.

Nicole said she fully supports her brother on his quest to finding his biological family. She said she wants him to experience the same joy and inclusion she felt when she learnt about who her mother was and was able to connect with her birth family.

Anyone with information about Nathan’s mother or family is asked to contact 786-250-8214 and n.lighhtbourne99@gmail.com.