Mike Sands: ‘We have to get the message out about who is NACAC’ 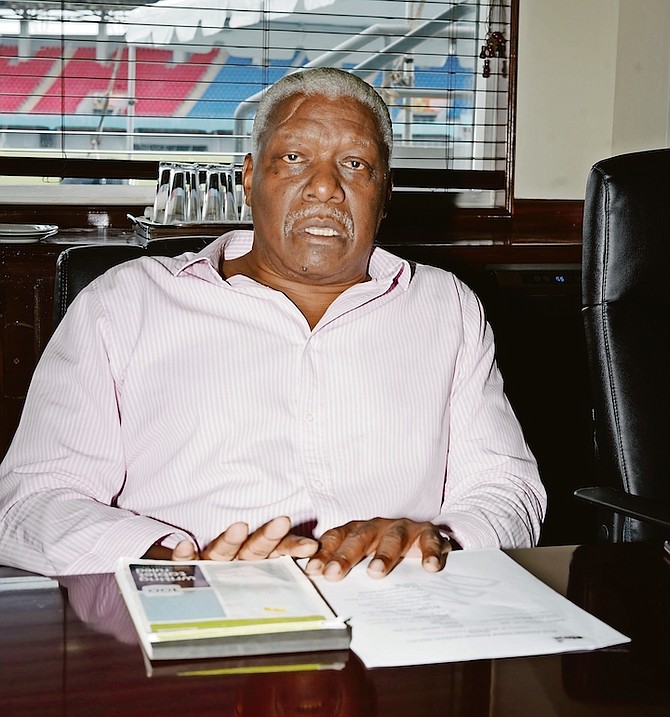 THE North American, Central American and the Caribbean (NACAC), in its bid to bridge the gap in all aspects of the region, hosted a virtual meeting with the media to ascertain the way forward and, in particular, the highly acclaimed CARIFTA Games as it reaches close to its 50th anniversary.

Sands, who was accompanied by Keith Jones, NACAC’s secretary general from St Vincent & the Grenadines, took the opportunity to hear the views and concerns of Laurence and Taylor about the role the media plays and from Woodside-Johnson on the management of events like the CARIFTA Games.

The 49th version of the top junior regional track and field games was scheduled for Hamilton, Bermuda in April, but was postponed due to the coronavirus pandemic. In preparing for a rescheduled event next year, NACAC got the imput from the media on how they could make the event a successful one.

“I think it’s a first good step in the right direction. I was pleased with the turnout of the area media. We were able to develop a relationship with the media so we can share what we are doing and not just keep it in a vacuum,” Sands said.

“By the same token, we got to hear the concerns of the media because if we are going to see them as partners and to work with them in tandem, we made it our objective to engage in dialogue.”

Sands, a former athlete turned executive of the Bahamas Association of Athletic Associations and now the NACAC president and a representative on the board of World Athletics, the governing body for the sport, said they need the media to get the word out about what they are doing.

“While we have some of the best athletes performing around the world, we have to get the message out about who is NACAC, the region that they represent,” Sands said.

“So the main way to get that message out is to develop a relationship with the press.

As a result of the meeting, Sands said they have identified Laurence, an accomplished sports writer at the Trinidad Express, as the liaison person, who will provide a formulated plan from the media that will be presented to NACAC for their consideration.

“We will look at it and see what is durable and equitable for all of us and then we will look at implementing them,” he said. “The ball is now back in the hands of the media to come back to us with their recommendations so that we can consider what was shared.”

More than 20 people from throughout the region logged onto the virtual platform and shared in the question-and-answer period that followed the presentations by Laurence, Taylor and Woodside-Johnson.

Laurence, who covered his first CARIFTA Games in 1997 in Barbados, said one of the major concerns for the media is the inconsistency that is created by the local organising committees of the respective host countries from year to year.

He called for a standard document that should be produced by NACAC that will outline the guidelines for the media’s participation at the games, including the removal of the $100.00 fee that is sometimes levied to the media to do their job when there is no charge for international events like the World Championships.

In consistent with what is done by World Athletics, the world’s governing body for the sport, Laurence said NACAC needs to ensure that the media is given finish-line seating with proper work stations, internet access before, during and after each day’s session, a proper mixed zone to interview the athletes when they have completed their events, workable results websites and media hotels and bus transportation to and from the venue in a timely fashion.

Taylor, a former public relations officer for the BAAA and the founder/producer of Bahamas Athletics, talked about his personal experiences in attending various international events like the World Youth and Junior Championships to the World Championships and the challenges he and other photographers are faced with in covering the CARIFTA Games.

Taylor called for NACAC to identify a photographer manager, whose responsibility it would be to ensure that the photographers are given the free reign to take pictures of the athletes as they compete at various angles of the track and field stadium.

And Woodside-Johnson, a former hurdler turned coach, provided a detailed account of the role she played as the events manager for such international meets as the World Relays and the Chris ‘Fireman’ Brown Invitational staged in the Bahamas.

Woodside-Johnson, the founder of the dismantled Club Monica Track Club and former head coach of her alma mater the Big Red Machine at St Augustine’s College, also served as head coach and manager of a number of national teams representing the Bahamas, including the 2012 Olympic Games (as the first Bahamian female assistant coach) and the 2017 World Championships (as the first Bahamian female head coach), both in London, England.