Front Porch: Pope Francis And The Gospel Of Love 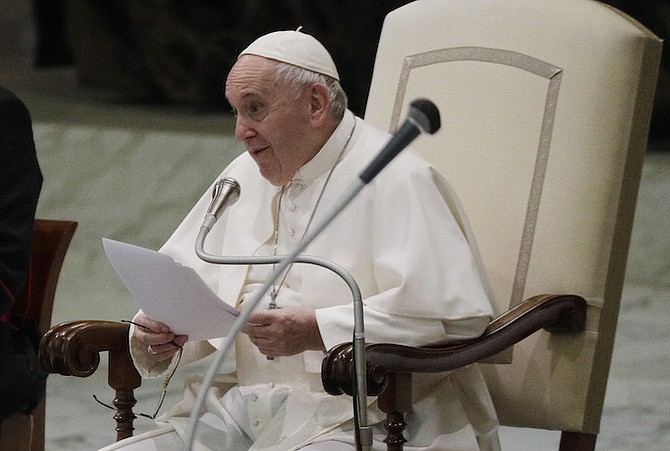 When Jorge Bergoglio of Argentina was elected as pope in 2013 at the age of 76 and took the name Francis in memory of St Francis of Assisi (1181 or 1182-1226), a beloved relative proclaimed: “Pope Francis is not just going back to St Francis. He is going all the way back to Jesus and the gospel of love and mercy.”

Throughout his papacy Pope Francis has emphasised the priority of love and mercy, and the radical dignity of and respect for all human beings, especially those marginalised and stigmatised. Like St Francis, the poor are at the heart of his priestly and papal ministry.

Pope Francis’ pastoral, warm and compassionate leadership has manifested itself in myriad ways, sometimes controversially. In the past few weeks, he has again provoked the conscience of the world and his church.

He recently released Fratelli Tuti, his latest encyclical, on fraternity and social friendship, inspired by St Francis and his abiding commitment to care for creation and the poor. He signed the new encyclical at the tomb of St Francis.

Pope Francis noted: “I was in Assisi to sign the new encyclical, Fratelli tutti, on fraternity and social friendship. I offered it to God on the tomb of Saint Francis…”

The encyclical and its critique of the degradation of the planet, rampant materialism, vast global inequality, the various forms of rapacious capitalism, the mistreatment of migrants and minorities and other manifestations of discrimination, among other topics, provoked criticism from various quarters, including some corporate interests who benefit from an unjust social order.

In the encyclical, Pope Francis also sought to provoke the consciences of the rich and middle classes and how we all use the world’s goods and care for or abuse the environment through our personal and social habits, especially during the COVID-19 pandemic and the global climate emergency, both of which are devastating the poor.

Like Jesus and St Francis, Pope Francis invites us to feel the sting of conscience and the demands of love and justice.

The head of the Roman Catholic Church has pressed the demands of racial equality, spoken of how the arms race continues to deprive the poor of basic goods and consistently spoken out against capital punishment and inequities in criminal justice.

There is a seamless gospel of love and mercy in the heart of Pope Francis. The call to fraternity and social friendship evidenced in Fratelli Tuti, is the same spirituality and love for those who are discriminated against, such as gays and lesbians. For Pope Francis, love must be the animating force of our being and our attitudes and actions.

Yesterday, as noted in an Associated Press story: “Pope Francis became the first pontiff to endorse same-sex civil unions in comments for a documentary that premiered Wednesday, sparking cheers from gay Catholics and demands for clarification from conservatives, given the Vatican’s official teaching on the issue.

“The papal thumbs-up came midway through the feature-length documentary ‘Francesco,’ which premiered at the Rome Film Festival.”

Pope Francis stated: “Homosexual people have the right to be in a family. They are children of God. You can’t kick someone out of a family, nor make their life miserable for this. What we have to have is a civil union law; that way they are legally covered.”

The Pope’s comments are remarkable and will stir considerable reaction. They are reminiscent of other comments he has made about love for our gay and lesbian brothers and sisters.

In 2013, on a flight back to Rome from Brazil, Pope Francis sparked controversy in response to questions as to whether there was a “gay lobby” in the Vatican. He responded in part: “If a person is gay and seeks God and has good will, who am I to judge?”

His fellow Jesuit Fr. James Martin, SJ, noted in a commentary at the time in The Washington Post in response to criticism of the Pope, including from various prelates and some religionists:

“Throughout the exchange on the plane, Pope Francis, speaking in fluent Italian, used the English word ‘gay’. Previous popes and the majority of church leaders have been more likely to use words like ‘homosexual’, ‘homosexually oriented’ and even ‘persons suffering from same-sex attraction’.

Fr Martin continued: “So there is something new. ... But there is also something old. Pope Francis has not changed church teaching on homosexual activity. ... Instead, he turned to a portion of the old teaching that often goes overlooked: The Catechism says that gays and lesbians are to be treated with ‘respect, compassion and sensitivity.’

“Even older is the unwillingness to judge... Jesus uses hyperbole to make sure his listeners understand, saying that you must take the ‘log’ out of your own eye before you can take the ‘speck’... from another person’s eye. In other words, if you want to judge someone, judge yourself. And just to be clear, Jesus adds: ‘You hypocrite!’”

Fr Martin directly addressed the question of judging: “The pope also knows that Jesus’s comment does not mean any of us will escape judgment. The Gospels are greatly concerned with judging moral activity... God’s judgment of our actions means that God is concerned about what we do. A God who doesn’t judge is a God who doesn’t care.

“But in the Gospels, it is God (or Jesus) who does the judging, not us. Jesus counsels his disciples not to judge but rather to show mercy. Indeed, Jesus not only counsels this, he demonstrates it by consistently approaching public ‘sinners’ with an offer of forgiveness rather than condemnation.”

In 2013, when the Pope demonstrated this love for and compassion toward gays and lesbians, some religious ministers at home called him reckless. He is in good company. Both St Francis and Jesus were also reckless with extraordinary acts of love.

Gays and lesbians are not so much seeking an affirmation of their so-called “lifestyle” – a derisive terms often applied by homophobes and those ignorant about many aspects of human sexuality – as much as they are seeking and rightly deserving of an affirmation of a shared humanity.

While prejudice, ignorance and hatred are still directed against homosexuals, we have made moral progress in The Bahamas in terms of loving and seeking to protect from abuse and discrimination our gay brothers and sisters. But we still have a long way to go to ensure greater justice and equality for gays and lesbians.

Pope Francis has called on the peoples and nations of the world to search their hearts, consciences and legal codes to root out injustice and to secure love and mercy for all of God’s children, including those who are gay and lesbian, and who will continue to demand justice and equality.

Hey, I'm not especially religious, but this is a good editorial on true Christianity. Imagine advocating for tolerance and love. How dare they! These sick liberals. Anyone from Freeport reading this?

Love don't mean what "sick liberals" think they mean in the Christian sense. Love means to REPROVE your brother and stop him from going down the wrong path. It is incumbent upon Christians to love everyone, by correcting them when they fall in error. That's what true love is. And the liberals aren't advocating for "tolerance." They want affirmation of homosexual wrongdoing and want us all to pretend as if that is normal/good. That's the major issue.

Utter rubbish. The Holy Father's comments were from a 2019 interview and were HEAVILY edited and there's also been a suggestion that he was mistranslated. This was the FULL context and the words which appeared in the documentary are in bold. And notice that he said "that doesn't mean to approve of homosexual acts." And regarding the comments about civil unions, the Holy Father used the term "ley de convivencia civil," which roughly translates into "civil coexistence." It CAN mean civil unions, but not in the context he used it in. He was talking about anti-discrimination laws, so homosexuals aren't mistreated because of their sexuality etc. But the media ran with it and are making it appear as if his comments resulted in some change in Church Doctrine. That's false. He didn't go against Church teaching which states that homosexual acts are sinful and that it is WRONG to give any legal recognition to homosexual unions (CDF, 2002). Besides, comments made by the Pope have ZERO effect on Church teaching unless they are made "from the Chair," using a specific formula.

“Another thing is, I said when you see some signs in the children and from there send them to - I should have said a ‘professional,’ what came out was ‘psychiatrist.’ I meant to say a professional because sometimes there are signs in adolescence or pre-adolescence that they don’t know if they are homosexually oriented or if it is that the thymus gland didn’t atrophy in time. Who knows, a thousand things, no? So, a professional. The title of the daily paper: ‘The Pope sends homosexuals to the psychiatrist.’ It’s not true!”

“They asked me the same question another time and I repeated it, ‘They are children of God, they have a right to a family, and such.’ Another thing is - and I explained I was wrong with that word, but I meant to say this: When you notice something strange - ‘Ah, it’s strange.’ - No, it’s not strange. Something that is outside of the usual. That is, not to take a little word to annul the context. There, what I said is that they ‘have a right to a family.’ And that doesn’t mean to approve of homosexual acts, not at all.”