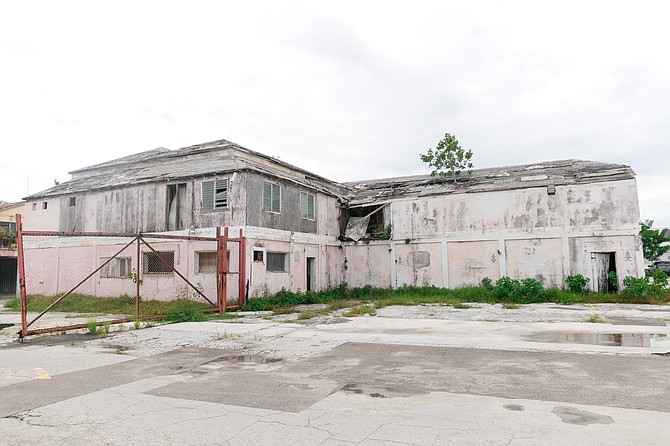 A dilapidated building in Downtown Nassau

THE Downtown Nassau Partnership has called on the government to get serious with owners of abandoned and dilapidated buildings on Bay Street.

In a statement released yesterday, DNP managing director Ed Fields, speaking on behalf of the group, called on the Ministry of Works to act on provisions afforded to the minister under the Building Regulations Act and to take a wrecking ball to abandoned buildings.

“If we are going to truly clean up the blight that we see east of East Street, the government will have to be aggressive, and it has the tools to do it,” Mr Fields said.

Under Chapter 200 Section 10 of the Act, the minister may take action if it appears that any building, structure or part of a building or structure is in such a condition or is used to carry such loads as to be dangerous or is by reason of its ruinous or dilapidated condition “seriously detrimental to the amenities of the neighbourhood”.

The DNP said most of the structures east of Elizabeth Avenue fall into the category of being detrimental to the neighbourhood’s amenities.

“In layman’s terms, those buildings are eyesores and they need to be demolished,” Mr Fields said.

The DNP said property owners have not improved or cleaned up the properties in question for decades. The group said tax concessions are in place to incentivise improvements or developments, yet little to nothing has occurred in this regard.

“If the carrot has not worked, it is an appropriate time to apply the stick,” Mr Fields said.

“We cannot continue post-COVID in the same manner. Change has to happen, and the Act can be the agent for the changes needed.”

The DNP said it recognises there will be challenges in carrying out such a move, but said the law is clear. It added that ridding downtown of these “eyesores” will not only make the area more attractive to local and international investors, but will aid the country’s national psyche, as the “condition east of Elizabeth (Avenue) is depressing for all”.

Most civilised countries do their best to retain their history, the BAHAMAS IS DOING IT'S BEST TO ERASE ALL HISTORY

what politicians want does NOT server Bahamian well

My Comrade K4C, we all have listened as you reluctantly spokes such anguish a straight fact and were spokes from out the heart's love colony valves. Can't wait to see you on the fast creepin' general election's possibly March 2021's, 39 constituencies campaigns' trail. Amen!

@K4C, I have to agree that our track record of looking after our historical treasures is abysmal, the Lighthouse a typical case in point. However, trying to make a case that the premises pictured is an historical treasure is stretching it a bit. Can you sell me some weed?

Ed Fields needs to be careful what he wishes for. Many of the dilapidated buildings he refers to are owned by the members of the corrupt political elite and/or their cronies, having been acquired from PLP and FNM governments alike in shady deals of one kind or another. And not everyone can get a gravy loaded lease deal with government like the Symonette Family got with their Town Centre Mall property. Minnis agreed with the Symonette Family under the ridiculous terms of that 'gravy' lease deal, that we taxpayers would be burdened with most, if not all, of the cost of fixing up that particular property which was in a most deplorable state.

East of Elizabeth Avenue was doing fine until short sighted Mr Ingraham moved the shipping away....