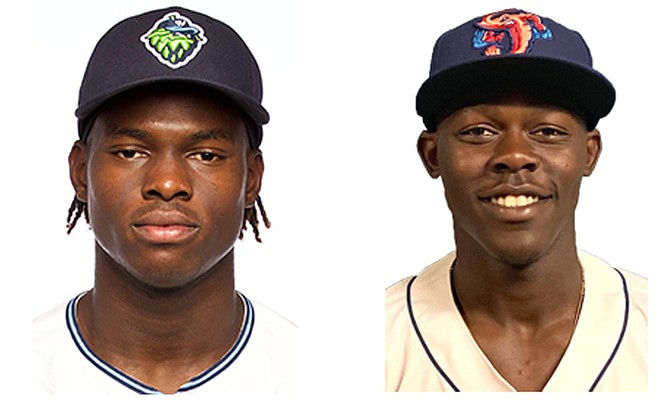 FOLLOWING the completion of the 2020 Major League Baseball season, the pair of Kristian Robinson and Jasrado “Jazz” Chisholm each achieved their highest rankings to date in the MLB Pipeline top 100.

Robinson rose eight spots from the last edition of the rankings where he was slotted at No.47, while Chisholm rose 11 spots from No.72 after his historic major league debut this season.

The Bahamas joined the United States (77), the Dominican Republic (13), and Venezuela (4), as just one of four countries with multiple prospects listed among the MLB Top 100.

Despite the cancellation of minor league baseball this season, Robinson has been lauded by the Diamondbacks staff at the team’s alternate training site for his improvement and a reported 25 pounds of added muscle.

“Everyone else was already in mid-season form, and it took him, like, two days to look like he’d been playing there all year,” said D-backs farm director Josh Barfield about Robinson.

“He had a few games where he’d do something to make you think, ‘We don’t have anyone else who can do that.’

“One in the pool, one over the pool and one on the concourse. He does some things that not many people can do.”

The 22-year-old Chisholm made his historic major league debut on September 1 against the Toronto Blue Jays at Marlins Stadium.

He entered the game as a defensive substitute in the top of the eighth inning for Miguel Rojas and officially became just the seventh Bahamian to play in the major leagues.

The Marlins were one of the most improbable stories in the 2020 season.

They were the worst team in the National League a season ago at 57-105 and returned in 2020 to finish 31-29 for their first winning season since 2009 and earned their first playoff berth since 2003.

Once they reached the postseason, the No.6 seeded Marlins advanced with a two-game sweep of the No.3 Chicago Cubs in the Wild Card round before they were eliminated by the Atlanta Braves in the NLDS.

Chisholm made his postseason debut in the final game of the season for the Marlins and became just the second Bahamian born player to play in the MLB postseason following Ed Armbrister’s run with the Cincinnati Reds in the 1970s.

Nice article, congratulations to Kristian and Jazz, and may God continue to bless you.