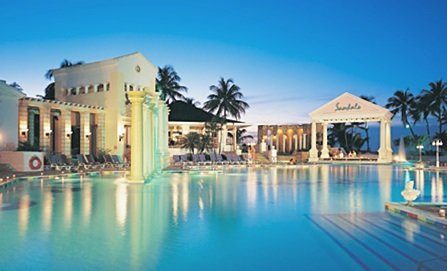 Sandals chief executive yesterday warned "not to hold on to" the February 1, 2021, re-opening date for its Bahamian resorts with this nation's COVID restrictions creating "confusion in the market".

Adam Stewart, group chief for Sandals Resorts International, told the Exuma Business Outlook webinar that the situation surrounding the return of its Royal Bahamian and Emerald Bay properties was changing "week to week" due to multiple factors.

Voicing optimism that traveller demand will "accelerate" once past next week's US presidential election, Mr Stewart indicated that forward bookings were just one consideration for Sandals when evaluating whether to re-open its Bahamian hotels.

The resort chain has opened in every other Caribbean nation bar The Bahamas, but the Sandals chief said this did not mean it had "fallen out of love" with the country. He explained that this nation had been left to last because the path to re-opening here was more uncertain due to the Government veering between COVID-19 lockdowns/restrictions and the relaxation of such measures.

Mr Stewart said that "the clearer that we are with the marketplace", the easier it is to stimulate travel demand and give potential tourists certainty as to the conditions they will face in terms of COVID-19 restrictions.

"One of the most complicated things that has happened for everyone, and not just the Government of The Bahamas, has been what is the pathway?" he added. "What will people need to do, and what has evolved? Of course, there have been a couple of lockdowns in The Bahamas due to spikes and the decisions that need to be made.

“With each one of those lockdowns, every action has an equal reaction. It’s created confusion in the marketplace, and other countries like the Dominican Republic and Mexico have decided just to open their borders and they have gotten ahead."

The Bahamas' decision to impose a 14-day mandatory quarantine on all visitors to The Bahamas, which is being replaced by a more stringent and frequent testing regime as of November 1, has also been cited as a major deterrent to tourism with this nation's attempt to compensate by branding this a 'Vacation in Place' regime not well understood or accepted.

"There are people out there that are fearful of travel. They have become less and less so, but they still exist. Then there are those that want to get on with life; they really want to put on a mask and get going. So all of that builds up to a place where the reason we have been able to open other hotels first is not for a lack of love for our beautiful relationship with The Bahamas; it was just clearer earlier.

"So, my job now is to work with my team to play a role in trying to build demand," Mr Stewart continued. "We’re back on television advertising, we’re back in the marketplace; our sales force right across the United States of America. We’re back to training travel agents, we’re back to playing our part of explaining how you can travel to The Bahamas.

"The date that we have now is February 1 [for opening in The Bahamas], but I would say to you to don’t hold on to it because it moves week to week as demand starts to build. We are seeing increased demand in the last couple of weeks. The US election is hindering and getting in the way of tourism at large. It is a very normal thing, and this year it is even a bit more chaotic than traditional years.

"I think we’re going to see, and we are hopeful that we are going to see, an accelerated demand after next week’s election, and The Bahamas is the shortest distance to go between anywhere in the Caribbean destinations and I think that’s going to favour well for us."

Joy Jibrilu, the Ministry of Tourism's director-general, told the same webinar: “I want to talk about the new travel protocols that are being introduced for November 1. We are seeking to streamline entry protocols that will enable visitors to better and more seamlessly enjoy The Bahamas vacation experience.

"Everyone knows up to November 1 there has been a 14-day 'Vacation in Place' requirement, so that’s another way of talking about quarantine. With effect from November 1 that requirement will be moved, but still in place will be the requirement for a PCR test that would be seven days prior to arrival. People will still have to apply for a Bahamas health travel visa.

"I should say that the Ministry of Tourism is working with the Ministry of Health, as they still want to see how we can streamline that entry protocol even more. So we’re waiting on some final decisions, but whatever decision will be made is with the intent of making it easier for the traveller to visit the destination."

Confusion? Gosh ... how did that happen?

yep, das we Bahamas. And you think all of the stupid asinine restrictions we put in place that tourist are actually going to want to come to the Bahamas???? For what???? The sun, sand and sea ????

They're not planning. They should have used March to May to do that. What they're doing is reacting as things happen that's causing the confusion

No confusion that when cruise ships toiles flush, we Colony's tourism minister Dioniso James doesn't give a damn where shit ends up.
The minister and his cabinet colleagues have done demonstrated that they are prepared to watch but not act as our sea waters are being transformed into a storage basin for millions of gallons out the toilets the for-profit ship's passengers of nasty, disgusting waste sewage. Shakehead once for Yeah, Twice for Not?