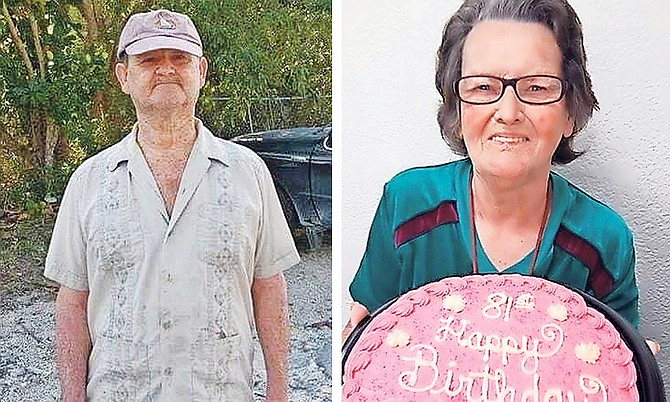 Lee Roy Lowe, left, and Juanita Lowe, who were both lost in Hurricane Dorian. 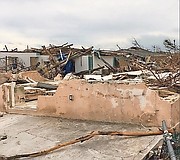 The home where the siblings sought shelter in the storm.

DORIAN survivor Emily Bethel says she misses the voices of her aunt and uncle and their sweet personalities the most now that they are gone.

Juanita Lowe and Lee Roy Lowe were killed after the Category Five Storm swept their home away.

Mrs Bethel said the siblings, who were close, had decided to ride out the storm together in the home in which they lived.

“They lived in that and when the lash of water came in, it took the whole building. It just left chunks of cement laying down so they were both washed in the back. They both were there.”

Recalling her final moments with the siblings, Mrs Bethel said the last time she saw them alive was around 5.30 pm on August 31, 2019.

Her aunt’s last words to her were, “We’ll be fine.”

She said: “The last time it was about 5.30 and I went and took the last of the grocery and I was talking to her about the hurricane and telling her about it because they didn’t want to leave.

“My uncle did not want to leave and go anywhere else and she would’ve gone but she wasn’t going to go and leave him so she wanted to stick with him.

“So I was telling her if the hurricane came and they needed to get out of their apartment they could go to the next empty house which belonged to them and she told ‘we’ll be just fine’ . That was her last words to me and that was on the 31st at about 5.30 and then Dorian came.”

Months earlier, Mrs Bethel said she remembers her aunt speaking about how their deaths would impact each other, saying she could not understand how the two could live without each other.

Speaking about her memories of the duo, Mrs Bethel yesterday described her aunt as a loving woman who loved to sing biblical songs.

“I miss her singing the old hymns as she passed out the house, you could hear her voice as she walked. She was known in the stores and KFC for singing as she waited,” she said.

“If a child walked in, she automatically started singing, ‘Jesus loves me, this I know the Bible tells me so.’ She loved the Lord and was never ashamed to tell it to everyone.”

Her uncle, she said, was a storyteller.

“He liked to tell his stories and figured other people had all day,” she said. “Nita and Lee – these two stuck together. They had their own way of life and lived everyday as they came. They were two of a kind.”

The storm’s official death toll is 74, with the majority of that number being Abaco residents.

Yesterday, residents of Abaco who now live in New Providence participated in a special motorcade in honour of all that was lost during Hurricane Dorian.

Event organiser Melinda Williams said the event was planned early yesterday morning for those who were unable to be present in Abaco to commemorate the historic day.

“Today, we have families here who have lost loved ones. All of us went through a monstrous storm and we are just grateful for all those who are here and we could come together in unity to celebrate today.

“Because this is a day of celebration because even though we have lost so much, we want to first give God thanks.”