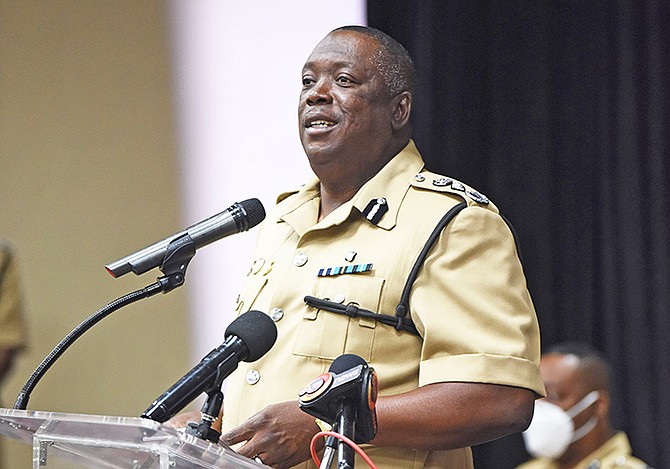 INSISTING that too many large social gatherings are still being held in the country, Commissioner of Police Paul Rolle yesterday warned members of the public to avoid these parties as police officers will not be stopped from enforcing the law.

The police chief said over the last few days, officers have had to intervene on several occasions where large parties were being hosted.

He said: “We had to deal with quite a few persons who took liberties to have parties and I want to repeat, we don’t want to be arresting people but they need to understand that the law is the law.

“And we encourage them to abide and hopefully, we’ll soon get out of this pandemic and be able to enjoy themselves with the various parties but whenever we find these breaches we are going to be taking action.”

In response to the COVID-19 crisis, the government in March imposed a series of restrictions to limit people’s movement such as the closure of beaches and non-essential businesses.

Restrictions have also been placed on weddings and funerals.

While some restrictions have been eased, social gatherings of more than 20 people are still prohibited in most islands. Such events are completely banned in New Providence, Grand Bahama, Paradise Island and other islands in the second schedule of the latest emergency order. Other COVID-19 restrictions include the closure of spas, bars and gyms.

Despite the COVID-19 protocols, Commissioner Rolle said people are still being found in breach of the guidelines.

He said while he understands the frustrations of residents who wish to move about more freely, locals must learn to be patient until the greenlight has been given by the government.

He told reporters: “What I want to say to the members of the public and the community is to abide by the rules because where we find them in breach, we will take decisive action in dealing with them.

“So, there were only about three in the last day, but I know persons have been a bit tired of being in a lockdown for the last few weeks and I appeal to members of the public to be patient. I would like to do some things that I used to do too, but I have to abide by the law as everybody else.”

Last month, the owner of a popular bar, Village Pub, was arrested after police responded to reports of an unauthorised gathering.

Yesterday, Commissioner Rolle said a total of 23 people were arrested in connection to that particular incident.

The video also showed officers using aggressive conduct towards those being apprehended.

In a statement released Thursday, police said an immediate investigation will be launched into the matter, which will be conducted by the deputy commissioner. An officer has been placed on leave pending the investigation.

The move was ordered by Commissioner Rolle.

The RBPF said: “ The police (are) aware of a video circulating in social media regarding an incident depicting images of a police officer effecting arrest using force. Commissioner of Police Paul Rolle has ordered an immediate investigation into this matter by the deputy commissioner to determine the exact circumstances surrounding the incident.

“The officer concerned was placed on administrative leave pending the outcome of the investigation.”

Most recently, the commissioner said officers arrested some 15 people after they were found inside a local club on Wednesday night.

“Again, last night, officers went into another club where they were arrested, I believe either 12 or 15 persons that were found on the inside,” he told reporters.

“And what I would ask members of the public is if you are aware of these incidents, call us. You call us and we will be able to go and deal with it as opposed to sending things around in social media. Just let us know and we will be more than happy to go there and deal with breaches as they occur.

“And I want to thank those persons who have been calling me. I think they see we have been very responsive to that and in dealing with that.”

Asked yesterday if officers had seen an increase of people breaking the quarantine, he replied: “Not to the extent that I have heard in the media, we have seen a couple of incidents and where we found those, we put those people before the court.

“I think the persons are being very cooperative with exceptions in these recent few days, where persons want to go about having parties. We can’t have that, and I say to them just wait.”