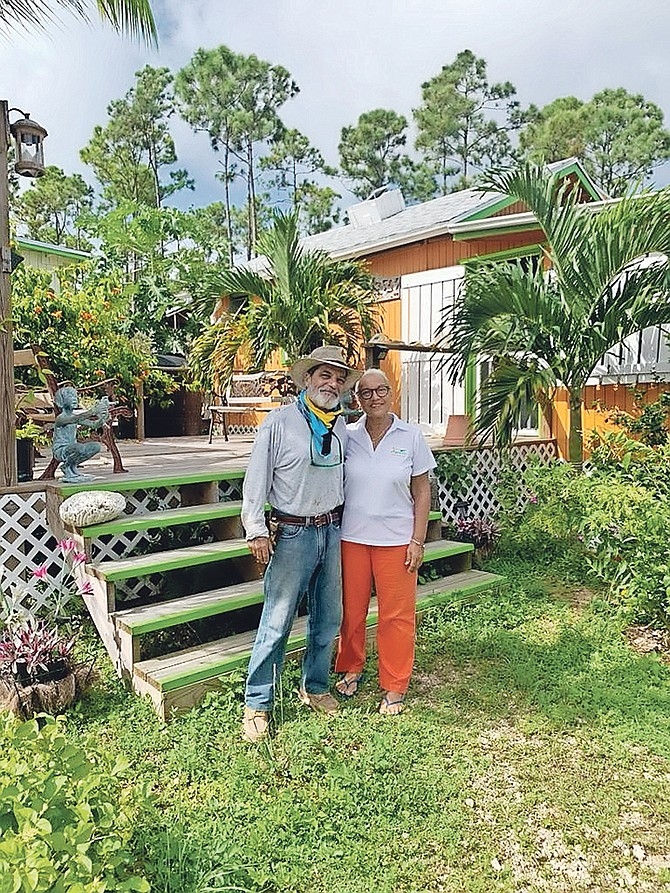 One year ago this week, Daphne de Gregory-Miaoulis and Nick Miaoulis rode out monster Hurricane Dorian atop their Abaco Neem production centre and retail store in Marsh Harbour. For nearly five long days and nights, they clung to balcony doors and occasionally each other. On the last day, a Friday they will always remember, the exhausted husband and wife managed to make it to their farm 15 miles south of the city.

Unlike many who ran away from Abaco as fast as they could, leaving behind blown apart houses, fallen trees, flattened roofs, strewn appliances, furniture and shattered lives, Nick and Daphne ran toward something in the wake of Dorian – a new life.

They were farmers come home to farming. A tiny 400 square foot cottage would become their new home. Working the land by hand and machinery would be their new routine, day after day as they stopped looking back and kept their eyes and their hopes on the future.

“That Friday, September 6 we took our first shower in five days and we looked around and realized the monstrous hurricane had destroyed everything - there was no electricity, no water, no communications. Marsh Harbour looked like a bombed-out World War II war zone – and there we were in our little cottage with solar panels. We had power. We had internet. We even had hot water,” says Daphne.

In that moment, that fork in the road, they took the route less travelled. The farm they started 27 years before would not just be their day job, it would become their home. There was no available labour because there was no place for helpers to live so Nick and Daphne, both in their 60s, returned to farming. Pre-Dorian, they had 7,000 neem trees, had just completed a research project that led to France’s moving neem from the forbidden to the helpful list. They had more than 1,000 coconut trees and 107 varieties of tropical fruit and flowering trees. The farm had been alive with birds and bees and activity. The store in town where Daphne spent most of her time has been filled with product for customers who flowed through its doors.

Post-Dorian, with everything in Marsh Harbour gone, Nick and Daphne worked the farm day and night. They gathered and hauled more than 1,100 fallen trees. They planted hundreds of fruit trees and replanted neem tree seedlings.

It’s all in the numbers

Your chances of surviving COVID-19 are 99.99 percent. According to a chart circulated by Organisation for Responsible Governance (ORG) on August 26, when there were 1135 active cases and 48 deaths out of a population of 393.800, you had less than a one tenth of one percent chance of dying. Unemployment prior to COVID shutdown was 10.36 percent, unemployment as a result of COVID, 40 percent.

Two people, one piece of heavy equipment, handling the work of a team to rebuild the bounty of 110 cultivated acres leased from government.

“It was hard,” said Nick. “We won’t lie.” Too tired to eat on most nights, they’d fall into bed in that tiny cottage, wake up and start all over again. Adrenaline kept them going. Daphne lost 20lbs.

“And I had to run the business side of it, too, paperwork, keeping what few orders we had going,” says Daphne.

Nick converted a building on the farm to the new processing and packaging plant. They are adding 200 square feet to their new home.

Overall, business is down 75-80 percent. But there is a new plan for the future – to build more cottages on the farm and create an experience for destination tourism while continuing to generate awareness of the value of neem, considered by many nature’s perfect plant for healthy lives. In India, neem is called the village pharmacy. Locally, in the face of COVID-19, neem is being recognized by the medical community for its medicinal value as a potent anti-viral and immune support.

Everything Nick and Daphne build now is off the grid, the home extension, two, 40-foot processing and production plant buildings, 2,000 square foot outdoor kitchen, pump for clean well water, guest cottages of the future, but solar salvation is only one of the many lessons they took away from Dorian.

Flexibility in the face of adversity, a willingness to adapt and change, finding inner strength are the lessons that Dorian, the storm of the century for the northern Bahamas, left after her frightening winds and deadly waves subsided.

Dear Minister Pintard & Messages to Others

This is the letter that Nick and Daphne Miaoulis, Abaco Neem founders and farmers, have been meaning to write to Minister of Agriculture and Marine Resources Michael Pintard:

“Thank you. We have been farming for more than a quarter of a century and this is the first time that the Minister of Agriculture truly understood what we needed and a government has given us farmers resources that we really needed, helped with animal feed, seeds and land clearing, demonstrating how important agriculture is. We now have free range chickens that give us fresh eggs every day. We have bees for honey and wax that is used in our production. Thank you, thank you.”

Here are a few other notes they would have sent had they come up for air:

“The government and the NGOs and everyone who has helped has done a fantastic job of clearing the debris from the streets and public spaces after Dorian cleared out. The private sector has been the disappointment.

“Many people who made a lot of money in Abaco just fled and went somewhere else and started other businesses or took their money and left without consideration of their neighbours left behind. Many have still not cleared the debris from their properties and it’s not the government’s responsibility to clean up private property. Please, take responsibility. It’s time.”

Just fyi – It has been one year since Hurricane Dorian hit and left The Bahamas. Power was restored two weeks ago to where the grandparent farmers clung to life during the storm. They have not missed a day nor suffered a power cut on the farm south of town where every building is off the grid and the sun beats bright and strong on solar panels.

Good for them. And dint mind the age. 60 is young. Only in the Bahamas they throw you out to the trash over 45. Their bodies are doing what bodies were designed to do. Manual labour.

Good for them indeed---Nice to hear a "success" story for a change!