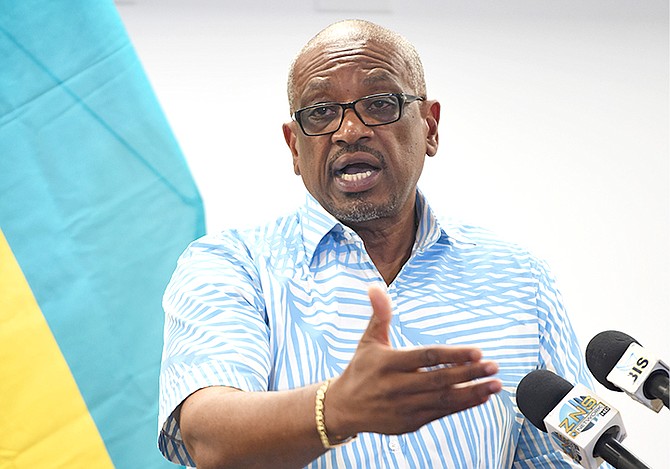 During the FNM convention ahead of the 2017 general election season, there was major concern about the leadership.

When we saw it was likely to be Dr Hubert Minnis, and then when it was confirmed, we started talking about what that kind of leadership would look like. People questioned his leadership ability.

One of the main points that came up often was his (lack of) skill in public speaking. Some said that was a trivial issue to raise and we had become too accustomed to the styles of Christie and Ingraham. They pointed to all of the talking Christie had done for the previous five years and asked where that had gotten us. The argument about whether or not public speaking ability is critical to the position of Prime Minister went on and on. It came down to needing someone in the seat, wanting a change in administration, and supporting whomever was there.

By now, we must see the importance of well-written speeches that are delivered with both confidence and compassion. We have to know, particularly after the devastation Hurricane Dorian and now in the midst of the COVID-19 crisis, that communication matters. Content and style are important.

When the nation is being address by the Prime Minister, it needs to be convinced he knows what he is talking about. That he is not just reading from a script. That he has access to data that informs his decisions. That potential outcomes — not just the ones hoped for — have been considered. Bahamian people and residents need to know that we are hearing from someone who understands all of our circumstances and is prepared to address our needs.

The Prime Minister needs, in every single address, to be able to deliver clear information, show empathy and give hope. We have not seen this at all. We are getting long speeches padded with unnecessary fillers and take far too long to get to the information we need. They are either delivered robotically, even when there are anecdotes built in that are meant to humanise Minnis. In many cases, including the last Monday address, they fall flat, offend, or create even more distance.

Last week, the Prime Minister shared a story about his four-year-old granddaughter. The veracity of the story doesn’t matter as much as the messages it sent. The child’s birthday was coming up and he asked if she would love to have a party. She said, “No, Papi. Party means gathering. Gathering means COVID. COVID means sickness.” This is in keeping with an earlier story he shared about the same grandchild refusing to kiss him, offering her elbow instead.

There are multiple things happening with these stories. He is trying to inject humour into his otherwise dry speeches. He is trying to present himself as a human being with a family, more like us than many of us currently regard him, seeing a more robotic, unfeeling entity seeking to control. He is also using his granddaughter as a tool to educate and inspire, saying, ‘Look, even a four-year-old knows we need to change the way we do things. You adults should takes from her!’ It is not a bad idea, but these stories thrown into otherwise terrible speeches don’t do much. Sometimes, they can go completely wrong.

Minnis went on to say that his granddaughter was taken to John Bull where she picked out her own present and said her Papi would come to pay for it. He noted the gift cost more than a party would have added up to. This was probably meant to be funny but it shows the disconnect between the Prime Minister and the people. Perhaps the people in his circle and who share his socioeconomic status and have concern for people who are struggling could laugh at that. People who still consider themselves “middle class” may even be able to have a little chuckle. There are far more of us, however, who are left wondering if he has a clue.

Over 100,000 people are receiving food assistance. Hotels are closed and employees have been at home for months. It was just reported last week that a IDB survey revealed 72.5 percent of households experienced income loss as of April 2020. Additionally, 46.7 percent of households said their income was below the poverty in April compared with January when 16.1 percent reported incomes below the poverty line. Of low-income households, 80.6 percent were impacted by job loss. Why would the Prime Minister share, in the middle of a crisis of this magnitude, that he purchased an expensive gift for his toddler grandchild? Somehow, he is not making the connection between the data he has access to and references in his speeches and the lived experiences of real people. People who are listening to him. People who are becoming increasingly aware that there is a large gap between his words and his understanding of very real circumstances.

It’s great that the Prime Minister wants to show more positive character traits. People generally don’t mind personal anecdotes and know he can spend his money as he likes. Those stories, however, should not be insulting or callous. People want to know when they can get back to work, what systems and programmes are in place for them to access assistance, and how the government will address the systemic issue of poverty (not to be confused with temporary circumstances).

Some of us are still spending a lot of time at home. Even those who are out and about need to find ways to wind down. Here are two books, one television show, and an Instagram account to check out this week.

1. Home Fire by Kamila Shamsie - This novel, winner of the Women’s Prize for Fiction in 2018 and long-listed for the Man Booker Prize, is about a Pakistani family living in the UK. The family, during a time of terrorist threats and under the shadow of its own complicated history is struggling to assimilate. The eldest child, Isma, has taken responsibility for her younger twin siblings following the death of their grandmother and mother. When the twins turn 18, she decides to pursue her dreams, but continues to worry about them. This family’s lives soon become intertwined with that of a political family through the son, a love interest. Themes of family, identity, love, and sacrifice are strong in this novel. It has five sections, each one dedicated to a different character, creating a more complex narrative. After reading this, I bought a few other books by the same author. I’ve read Salt and Saffron which, while it did not quite measure up, I enjoyed.

2. Free Food for Millionaires by Min Jin Lee - Casey Han is the daughter of Korean immigrants and she loves expensive things. This novel shows the complexity of Asian American life. Money, capitalism, gender, religion, and racism are prominent themes and the events that unfold are not inspired by stereotypes, but challenge them. Casey is pursuing higher education, has thousands of dollars in credit debt, needs to end a bad relationship, and has a secondary family that seems no-strings, but may not be. I picked this up because I loved Pachinko, an excellent novel by the same author.

3. Succession - Can a television show be drama and satire at the same time? This HBO series, boasting five Emmy nominations in 2019, is about the Roy family, owners of Waystar Royco—media and hospitality giant. The father and CEO Logan Roy had a major health event and his children expect him to announce a successor soon. They compete with and scheme against each other in efforts to gain control of the company. Logan seems to be a puppet-master and, at times, they are aware of it, but they can’t seem to stop themselves from trying to impress him and stay on his good side. Lies and manipulation are the order of the day, every day.

4. Yungbbq - This Instagram account is fun to watch. Yung BBQ is a dancer and personality with 1.2 million followers. She posts daily videos of herself dancing, usually in the street. She puts together outfits that perfectly match the music (and often mimics that of the artist in a music video), her dance moves are fun, and there is a combined reaction of laughter and awe. She combines technical skill with personality and her videos bring joy to hundreds of thousands of people. Last week, her I Can’t Stand the Rain dance video, completely with the Missy Elliott outfit, got 1.5 million views.

Remember when he got angry and said the reporters were making a big deal about 100 dollars? The PM is unfortunately way out of touch with people standing in the food assistance line.

"The Prime Minister needs, in every single address, to be able to deliver clear information, show empathy and give hope. We have not seen this at all. We are getting long speeches padded with unnecessary fillers and take far too long to get to the information we need"

100% agree. I have stopped listening to the addresses and wait for the written version instead. The hours I have spent listening to these long drawn out broadcasts I will never get back. The PM does not have the oratory skills to be a motivational speaker or a pastor and so he should just deliver the facts.

"I have stopped listening"

He will always be too detached because he's so full of himself. And he will never be a good speaker because he just doesn't have what it takes between his two ears. His lack of spontaneity and inability to quickly address issues on the fly are characteristic of a slow thinker. By the time the penny drops for him, the tortoise has long ago won the race.

My recollection is that the first "Papi Story" was about his granddaughter visiting and refusing to hug him. Can the Tribune please investigate this? It seems that that visit occurred at a time when we were not able to leave our home to visit family...or did the Competent Authority exempt himself and his family?

My thought when I heard the first "Papi Story" about his granddaughter visiting and refusing a hug was how was the visit possible? Can the Tribune check whether visits to family were allowed at that time or did the Competent Authority exempt himself and his family? Other grandparents want to know!