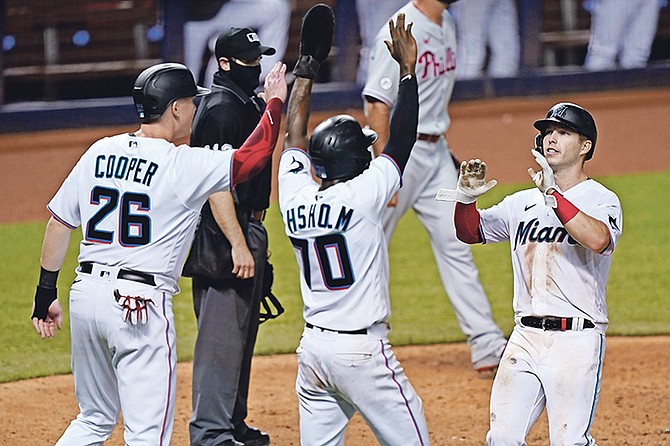 Miami Marlins’ Garrett Cooper (26), Jazz Chisholm (70) and Corey Dickerson, right, celebrate after they scored on a double by Starling Marte during the eighth inning of a baseball game against the Philadelphia Phillies, Thursday, in Miami. (AP Photo/Wilfredo Lee)

The Miami Marlins began a pivotal seven-game homestand against the Philadelphia Phillies with their first walkoff win of the season and regained a winning record in the standings.

Jazz Chisholm went 1-4 at the plate with a walk and scored one run in his third consecutive start at secondbase and the Marlins defeated the Phillies 7-6 last night at Marlins Stadium in Miami, Florida.

The Marlins improved to 20-19 on the season.

Chisholm had an opportunity for late game heroics in the bottom of the ninth inning against Brandon Workman with runners on the corners and one out, but struck out. Workman threw knuckle curveballs on five of the six pitches in the at-bat.

After a strikeout and a flyout in his first two plate appearances, Chisholm was walked in the sixth inning and advanced to third on a Jorge Alfaro single. He was left stranded on third after Corey Dickerson struck out swinging and the Marlins trailed 6-3.

Following a Garrett Cooper walk to start the eighth, Chisholm sparked the Marlins’ rally with his single to left.

He connected with Tommy Hunter’s 91 mph sinker on a 2-2 count. Dickerson followed with a single of his own to load the bases for Starling Marte.

Marte doubled to right field to clear the bases and tie the game 6-6 headed into the ninth.

The teams continue the series today at 5:10pm.

Chisholm is expected to continue his role in the lineup after the Marlins officially announced starting secondbaseman Jon Berti was placed on the 10-day disabled list with an injured right finger.

Chisholm now has back-to-back games with hits for the first time in his career and has scored four runs on the season.

The unusual seven-game series between the Marlins and Phillies is due to the COVID-19 outbreak earlier in the season that postponed the previous matchup.

In the previous series during the first weekend of the season, the Marlins won two out of three games.

The Phillies fell to 21-19, just 0.5 game ahead of the Marlins in the National League East standings.