12 Migrants Rescued - But Search Is On For More At Sea 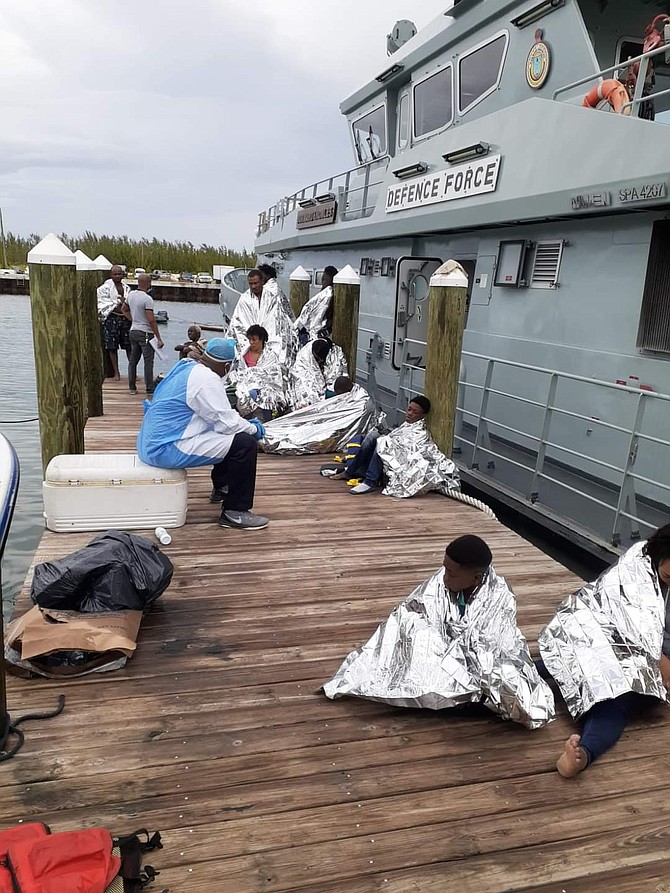 A SEARCH and rescue mission is underway for a group of Jamaican and Haitian migrants reported missing at sea.

This comes after the Royal Bahamas Defence Force rescued 12 migrants who were stranded at sea on Saturday from a capsized vessel off Chub Cay in the Berry Islands.

“After receiving reports from Nicholls Town Police Station that a 27ft vessel was taking on water nine miles south of Chub Cay in the Berry Islands, RBDF Patrol Craft P-127, (headed) by Chief Petty Officer Onassis Ferguson, was dispatched to the area to investigate,” the RBDF noted in a statement.

“The search and rescue unit arrived on scene at 5.20 am to find the vessel partially submerged with several individuals in the water clinging to the vessel. Twelve persons were subsequently rescued with ongoing search efforts to find the remaining persons.

“The rescued migrants were transported to HMBS Coral Harbour to be processed and checked by medical personnel in advance of subsequent handover to police and immigration officials for further processing and investigation.”

In the statement, the RBDF and Commander Sturrup advised “boaters of their responsibility to observe boating safety requirements related to the possession of adequate safety, survival and communications equipment as per the Port Department regulations. Individuals are advised to adhere to the Emergency Orders as it pertains to maritime traffic and the movement of passengers.”

The RBDF also urged boaters to pay attention to local weather warnings and to report instances of suspected human smuggling or trafficking to its Operations Department at 826-3117 “to effectively counter such transnational maritime threat”.

Amazing, Bahamas Defence Force boat in Official Maritime Ocean duties can learn the 27 ft boat sinking, can learn 12 stranded an 5 missing, they are Jamaicans and Haitians, they have been known are "migrants",.....but the RBDF in Official Maritime sovereign waters Duty didn't seem to have mentioned or is reported in article anything on the Captain of the vessel sunk. Why is Bahamian taxpayers paying for knowing all other sad and pertinent information this rescue and tragedy, but not told of the Captain of the sunken boat..??? Amazing for decades the Taxpayers paying huge naval boats operations etc salaries for Officials in protection of Bahamas never gets to learn of these vessels Captain or alleged Captain of these vessels or of names of seems organized crime.

Who the hell places 17 people (alleged, 12 certain) in a 27 foot small craft? That Is Criminal, if even for a short shuttle-ride from one island to another, in good weather. Here we have a Depression with strong winds & waves! In a land of natural mariners? The smuggler cares not one iota for the immigrant's lives, just pay me & God help you desperate immigrant. The crew/captain/smugglers are the criminals, taking the money & run like cowards that they are. They should be identified in every news piece, no matter who's brother or cousin they may be!!