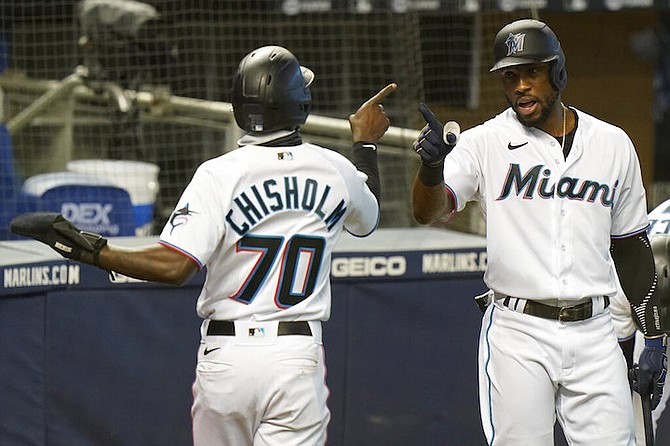 Miami Marlins' Jazz Chisholm (70) is congratulated by Starling Marte after scoring on a single by Corey Dickerson during the third inning of the first game of a baseball doubleheader against the Philadelphia Phillies, Sunday, Sept. 13, 2020, in Miami. (AP Photo/Wilfredo Lee)

“JAZZ” Chisholm and the Miami Marlins have moved into sole possession of second place in the National League East following yesterday afternoon’s sweep in a double header over the Philadelphia Phillies.

In the opener, Chisholm got the start in shortstop after starter Miguel Rojas jammed his right middle finger. He walked in the third inning and advanced to second after Jorge Alfaro drew a walk. Chisholm scored on a Corey Dickerson single to tie the game at one and the Marlins scored the go ahead run when Starling Marte drove Alfaro home on a single of his own.

In game two, Chisholm started at secondbase. At the plate he went 1-3 and scored one run.

The Marlins led 5-1 in the bottom of the sixth inning and Chisholm got the Marlins rally started when he hit a single to left field that advanced Garrett Cooper to second.

Rojas followed with a double to left field to score both Cooper and Chisholm as the Marlins widened the margin.

Defensively, Chisholm also teamed with Rojas and Jesus Aguilar for a pair of 6-4-3 double plays.

The Marlins complete their seven game series with the Phillies today at 4:10pm.

Chisholm is hitting .161 with five hits, six runs scored and two RBI since his MLB call up.

For the remainder of the season, the Marlins are scheduled to play everyday through September with series against the Boston Red Sox, Washington Nationals, Atlanta Braves and New York Yankees.