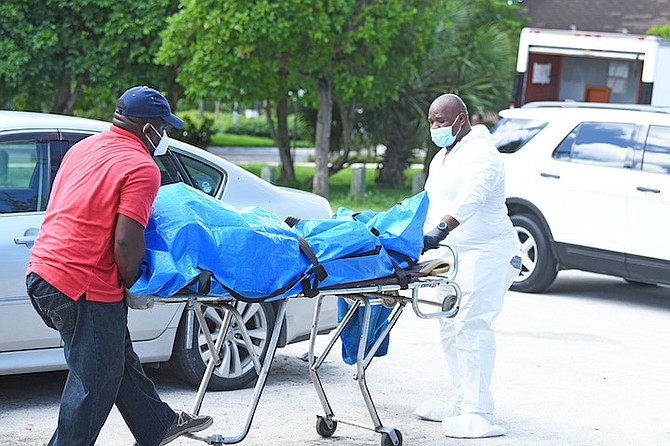 The body is removed from the scene at Goodman's Bay. Photos: Shawn Hanna/Tribune staff

A MAN’S body was discovered in a vehicle located in the parking lot of Goodman’s Bay on Tuesday.

ASP Audley Peters said at this stage, the incident is not being treated as a homicide nor is it suggested it’s a suicide.

“At the moment, it is considered as a sudden death and until we get the autopsy report to indicate otherwise,” ASP Peters told reporters.

He explained that shortly before 10am Tuesday, police received reports of a body being found inside a vehicle in the western New Providence parking lot.

“Police responded and on their arrival they discovered in a gray vehicle, a male’s body crouched under the passenger seat. An examination of this body was conducted. There were no injuries found to (his) body and that’s all the information that we have at this time,” ASP Peters said.

“There’s information within the vehicle that there’s a possibility that this individual might be a prison officer and so that’s why his presence was here this morning to confirm but at this moment we’re not confirming or denying whether that individual (was a prisoner officer),” ASP Peter said.