Stateside: Is This The Answer To What Put Trump In The Oval Office And May Keep Him There? 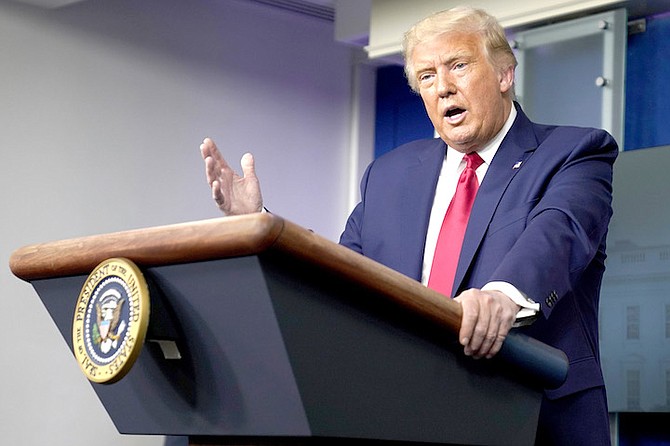 We all know someone who’s really smart. Maybe we know these smart people from school or work, or maybe they’re someone from our own family. Sometimes, they are celebrities. We see them on TV or read what they write in the newspaper, online or in a book.

Tom Friedman is someone like that. He’s really smart. Unlike our neighbour or friend or relative, though, he is often recognized for his ability to see and write about stuff we only recognize after reading what he writes.

Friedman has been writing a column for the New York Times for 25 years. He has been honoured with three Pulitzer Prizes for his work. He has the resources that enable him to travel the world and produce for the newspaper a smart column or two each week, some bestselling books every so often, and appear as a sage observer of the world on television.

He is 67-years-old and is married to an heiress. He lives in an 11,000 square foot home near Washington. Life is good for Friedman, despite the fact he is still criticized for views like his support for George W Bush’s invasion of Iraq in 2003.

One of the things that has been puzzling Friedman in recent months and years, he has said, is the enduring loyalty to and support for US President Donald Trump by his “base”.

This has flummoxed plenty of other Americans, too. They cannot figure out why Trump’s supporters continue to support him. He lies to them regularly, strains their credulity by spouting nonsense and expecting them to accept it, and cannot bring himself to honour or respect anyone but himself. Vain, self-absorbed and insecure, the President is not someone you’d expect to command such loyalty and devotion from his fans. But he does.

Just look at the past week. Trump gets caught out by maybe America’s most trusted journalist since Walter Cronkite as he boasts to Bob Woodward that he knew how dangerous COVID-19 was in January and yet lied to the American people for months about a virus whose death toll now approaches 200,000.

Then, as parts of the American West as big as small states are unprecedentedly ravaged by forest fires at least partly attributable to global warming, Trump sits with California’s governor, smiles patronizingly and tries to reassure his audience that “it’ll all go away soon”.

Who believes or trusts or supports such a buffoon? And why in the world would they continue to do so?

Tom Friedman set out to figure this all out. He enlisted his friend, Harvard professor Michael Sandel, to assist him. Sandel is also one of America’s smartest people. He is also 67 and like Friedman, grew up in the Minneapolis area and attended Brandeis University near Boston.

Sandel has been teaching at Harvard University for 40 years and has the distinction of once having enrolled 1,115 students in one of his classes. That was the most students ever for a single Harvard class. Sandel has used his university teaching experience to hone his public speaking skills so well that he has become a highly sought speaker on matters like ethics and justice.

Witty and engaging, he will engage with his audience by gently picking out one of its members to whom he presents ethical dilemmas and then laugh with them and the rest of the audience when they are baffled at how to deal with the problem he has presented. He uses this as a teaching technique and audiences leave in awe of a man so bright and yet so easy to like.

Sandel asks his audiences questions like “Is torture ever justified? Would you steal a drug that your child needs to survive? Is it sometimes wrong to tell the truth? How much is one human life worth?” This is some heavy stuff, but this professor makes it seem light and intellectually accessible.

Life is pretty good for Sandel, too, but like Friedman, he is puzzled by the enduring appeal of Trump. So the two of them tried to figure it out. What they came up with is as good an explanation as any for a phenomenon that remains inexplicable to many observers.

Maybe the best way to approach Friedman and Sandel’s thesis is to recall a remark made during the 2016 presidential election campaign by Hillary Clinton, who didn’t know she was being recorded.

Clinton referred to Trump’s supporters as “the Deplorables”. She was talking about basically the same people who were described several years previously by Barack Obama as “sad, bible-toting, gun-carrying folks” who, Obama implied, couldn’t think clearly enough to support candidates like him whose policies would actually benefit them.

Clinton and Obama were talking about the people who became the base of Trump’s continuing political support. Clinton and Obama know they are smart, and maybe they want you to know it, too. Maybe it seems to many Americans that people like Clinton and Obama might look down on them because they aren’t smart enough.

Friedman and Sandel think it was Trump’s ability to attract and retain the allegiance of these “poor, sad Deplorables” that propelled him to a shocking victory four years ago and may return him to the Oval Office in another seven weeks.

Still, the evidence against the President continues to accumulate, on a nearly daily basis. Trump and his corrupt cronies are still openly trying to mess with health care, lavish tax breaks on wealthy plutocrats and abet those who would poison America’s air and water.

How, Friedman and Sandel ask, could his supporters stick with Trump in the face of all this venal incompetence and corruption?

Friedman and Sandel have concluded that many Trump supporters are not attracted to his policies. After all, it’s hard to identify policies when you’re thinking about Trump. What is his foreign policy, for example? Cuddle up with dictators like Putin and Kim Jong-un who want to bring America down? Disrespect longtime allies? Poke a stick in China’s eye?

No, Friedman and Sandel conclude. His supporters are attracted to Trump’s attitude — “his willingness and evident delight in skewering the people that his base hates and who they feel look down on them.”

“People will absorb hardship, hunger and pain,” Friedman writes. “They will be grateful for jobs, cars and benefits. But if you make people feel humiliated, they will respond with a ferocity unlike any other emotion, or just refuse to lift a finger for you.

“As Nelson Mandela once observed, ‘There is nobody more dangerous than one who has been humiliated’.”

Sandel writes that “one of the deepest political divides in American politics today is between those with and those without a college degree.

In the 2016 election, Trump won two-thirds of white voters without a college degree.”

Friedman and Sandel, according to the New York Times, believe these “undereducated,” often traditional, blue collar Democratic voters felt liberal elites were looking down at them, that new immigrants were superseding them and that foreigners were laughing at them. And Trump vocalized and acted out their resentment.

Trump, in other words, has used the presidential pulpit to return to the American liberal elites the disdain long felt by the nation’s ‘Deplorables’. Right back at ya!

“Joe Biden is right that Trump botched the pandemic, violated constitutional norms and inflamed racial tensions — all good grounds for throwing him out of office,” Sandel writes.

“But Biden could win this argument and still lose the election. He must find a way to show that he understands those who feel disrespected and are drawn to Trump for that reason — even though most of his policies don’t help them.”

The first presidential debate between Biden and Trump is scheduled to take place in less than two weeks.

That would be a good time for Biden to follow Sandel’s advice.

Now this is a bunch of malarkey spewing from sniveling elitist arm chair philosophers !

What these supercilious, self aggrandizing dimwits do not understand is that Trump is a smart guy with common sense who is relatable to common people. Most people see through the smokescreens of fake news and Trump bashing. Secondly, if you run down a list of Trumps promises and results the average person can see that he has kept a bulk of the promises that matter to THEM. They will blame the Dems and the failed impeachment process for impeding his accomplishing the others!

People can berate Trump all they want, but he has turned the political world upside down once and will do it again!

Wow. Get your head out of the sand. He is without a doubt the worst, dumbest president in history...

You trumpies are just sad little people that live in self imposed ignorance...

But hey! Please donate to We Build the Wall! Once its done Mexico will pay you all back...

There is, can never be, an excuse for supporting a vile, compulsive lying sociopath. He had admitted on tape that he downplayed the virus, causing thousands of deaths. This alone, should qualify him for the death penalty, not an elected position. I am absolutely amazed that a person could support this jackass and still hold their head up, even admitting it.

"Trump is a smart guy with common sense who is relatable to common people".

I don't know where to begin with that so I won't as I suspect I would be wasting my time.

... doesn't matter what you guys think, opinions are like noses, everybody has one. This is one of the major problems I see, certain people think their opinions have greater value than the opinions of others. It reeks of high-mindedness' with authoritarian tendencies, get over yourselves! People will have views that differ from yours!!

We don't get to vote and the American public will decide in just a few days! Let's see what happens!