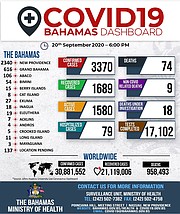 ONE hundred and ninety-three new cases of COVID-19 were reported over the weekend, while five more coronavirus deaths were confirmed, according to information from the Ministry of Health.

The latest data shows 55 cases were reported on Sunday, pushing the overall count to 3,370.

Of the latest cases, 51 are in New Providence, while there was one each in Grand Bahama, Abaco and Exuma. There was also one new case with its location pending.

Last night, officials said two additional deaths are under investigation, pushing deaths in this category to 18.

The Ministry of Health also said 101 cases were confirmed on Saturday.

Of this figure, 69 were in New Providence; eight in Grand Bahama; one in Exuma and 23 cases with locations pending.

Another death was also confirmed on Saturday, after a 69-year-old male of New

Of those cases, there were 34 in New Providence, two in Eleuthera and one in Abaco.

The Ministry of Health also confirmed four COVID-19 deaths on Friday, including two people from New Providence who died on September 17: an 81-year-old male and a 66-year-old male.

These cases pushed the official death toll to 74.

Unless we start doing something different these stats are only going to get worse. These are appalling numbers for a small nation like ours. What I would like to know is how many positive tests are we recording against the number of tests taken? This provides a good indicator of how much of a community spread we have. In Europe, I believe they are aiming for a ratio of under 5% I suspect our ratio is much higher. The Health authorities need to show this ratio on their dashboard.

what will a number do for you? wash your hands and 6ft nigga 6ft!

Good Comrade Jesus, unimaginable but is The Colony's hospitals ICU's at the ready for a 600 a new 3-day reporting period new cases of COVID-19 with death count heading to hit 15-20 over a 3-day period? Abaco's counts are climbing with Long island becoming a serious virus contender.
*Shakehead once for Yeah, and still, delusional health officials claiming the virus numbers are trending in the right direction, and then there is the equally delusional Dioniso James, 'ems is so upset that the hotels won't reopen, nor are cruise ships ready be calling on we ports, Twice for Not?

Now let's see what the PM does.

Did anyone stop to wonder how a killer virus made it around the whole world in record time only affected and locked down 1 city in China?

Minnis and D'Aguilar should have long ago resigned from government. They each have much death on their hands and absolutely no shame or remorse. They are an utter disgrace and embarrassment to our country.

Seem to me that it's not about the PM or anything political... Its sad we still looking at it from a political standpoint... No matter who the government is Covid is here to stay. Vote them out, vote new ones in Bahamians still ga be doin foolishness, especially in Nassau, that is the problem, Nassau has the big numbers.... Nassau!