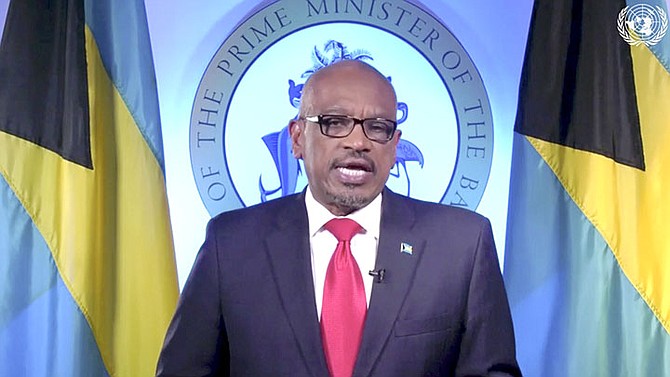 Prime Minister Dr Hubert Minnis speaks in a pre-recorded message which was played during the 75th session of the United Nations General Assembly, Saturday at U.N. headquarters. (UNTV via AP)

Prime Minister Dr Hubert Minnis has called for a vulnerability index to be used in the decision-making processes of international financial institutions and international donors with regards to countries like The Bahamas.

Speaking on Saturday at the 75th United Nations General Assembly – which is being held in a virtual format – Dr Minnis described small island developing states as being “under constant assault external shocks beyond their control” and said middle-income countries are being assessed by international financial institutions using “outdated methodologies”.

“The economies of small island developing states, including those of the Caribbean Community, are under constant assault from various external shocks beyond their control,” Dr Minnis said.

“This group of countries is among the most disaster-prone areas in the world. Pandemics, hurricanes, or climatic events, do not discriminate between low-income countries, middle-income countries, and developed economies.

“Hence the compelling question remains, as to why middle-income countries are still being assessed by international financial institutions using outdated methodologies that give no consideration to a country’s level of exposure, vulnerability and ability to recover from exogenous shocks.”

Dr Minnis added that eLAC estimates that developmental achievements in the Caribbean and Latin America have been reversed by at least a decade due to COVID-19.

“World Bank projections point to at least 100 million people falling into extreme poverty,” the Prime Minister said. “I therefore reiterate the call for the institutionalisation of a vulnerability index in the decision-making processes of the international financial institutions and international donor community.

“I also echo the call of the region for the capitalisation of a Caribbean Resilience Fund.

“The decision of the G20 group to suspend debt service payments for the least developed countries is commendable, and I offer that this concession should be extended to other economic groupings as well.”

Dr Minnis further highlighted the The Bahamas’ struggle to recover from Hurricane Dorian.

“The Bahamas experienced major hurricanes in 2015, 2016, 2017, and in September 2019, Hurricane Dorian, the largest Atlantic storm in recorded history,” he said.

“Infrastructure and housing projects are ongoing, while we grapple with the impact of COVID19, we continue to reach out to international partners for the much-needed assistance to restore and rebuild those islands.

“A Donors Conference coordinated by the United Nations Development Programme was held in Nassau on January 13, 2020, for which I wish to express the heartfelt appreciation of my Government for all of the pledges of financial resources and assistance made at this conference.”

My Comrades, I'd place a heathy wager an English pound note that if the right kind very sensitive sensors were implanted to detect movements originating out his brain, and regardless if you be's driving east or west - you'd easily pick up vibration 75 marbles loosely rolling around em's brain. Shakehead once for Yeah, Twice for Not?

Just more begging as a poor substitute for his own inability to govern. Minnis has single handedly turned us into a nation of beggars.

‘Under constant external shocks’ & that’s why in a country of 400,000 we’ve chosen to target 1 woman - don’t even have the decency to tell her why we’re so obsessed (possible reasons are incoherent & changes daily). Yes, we have tons of empathy & should be seen as ‘sympathetic’ figures. I could be wrong but I have a feeling ‘he’s still mad’ about something (can’t forget when I harassed him - which means I’m no lady - and it also confirmed I stalked him too...).

As I have always maintained, governments of smaller nations, like The Bahamas and weaker nations like Venezuela and Brazil and most African States become mere puppets to the more powerful nations. And when they refuse boy dance and wiggle, their (puppet ) strings get cut!