Stateside: You Had To Pinch Yourself - This Isn’T Really The America We Know 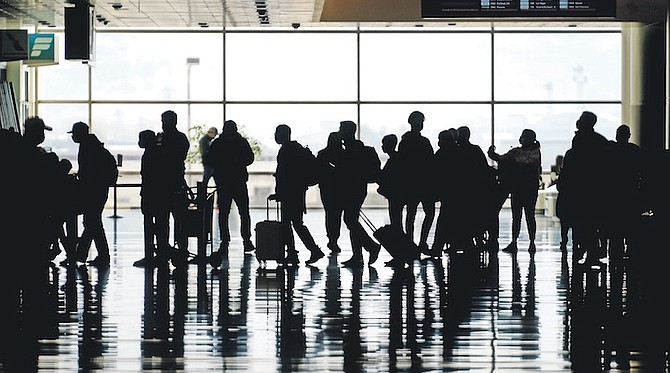 SILHOUETTES of travellers at Salt Lake City International Airport - as tourism is left a shadow of its former self in the US. Photo: Rick Bowmer/AP

Yesterday was cool and breezy in the mid-Atlantic region of the US. Rapidly scudding clouds foretold of rain to come later in the day, but for winter-weary Americans, the springlike 60-degree temperatures were a most welcome reminder of winter’s passing.

Along the Tidal Basin, an eddy of the Potomac River in Washington DC that is notably adorned with the majestic Jefferson Memorial honouring America’s third President, the scene was familiar to locals. It was cherry blossom time.

Each year around the beginning of the month of April, hundreds of Japanese cherry trees emerge from the gloom of March to brighten swaths of the US national mall in Washington. Their mostly snow white (but occasionally pink) blossoms all come out at the same time, and a visitor’s eye is easily distracted from the gnarly 109-year-old trunks and branches of these small, very mature trees that were originally a gift of the Japanese government.

Often, as is the case this year, Washington’s Cherry Blossom Festival coincides with public primary school spring breaks for American kids. The result is that downtown Washington and the Tidal Basin are overrun with kids, parents, regular foreign and domestic tourists and the curious from nearby regions. It’s an amiable mess of traffic and people.

Yesterday was both different and the same. It was different because there weren’t any schoolkids on the sidewalks and paths around the cherry trees. There also weren’t very many tourists from other nations. Notably, there didn’t appear to be any Chinese visitors – a startling departure from the norm. There weren’t any Northern European blondes with long hair and backpacks either. Nor were there the ubiquitous classic American family units – mom and dad and two or three kids, all similarly attired in colourful t-shirts, shorts with cameras slung around the neck.

Some French and Japanese was overheard, but almost everyone was speaking English. There was no Russian. No Spanish. No Chinese. No German.

The crowds of people were obviously, overwhelmingly American. Those who responded to an observer’s queries almost unanimously said they had come from within 100 miles of Washington DC. Many simply drove in from the nearby suburbs.

The area was nevertheless crowded, and the usual traffic barriers were in place to limit pedestrian access to the busy streets and to channel the slow-moving traffic through various bottlenecks.

Many were there to pose for pictures against the spectacular backdrop of the blossoms. There were many young couples, self-consciously smiling together for a wedding planner’s photographs. Groups of young women flitted about, chattering excitedly from behind their masks and taking dozens of pictures of each other with their cell phones.

Some couples had planned ahead and planted their cell phone sticks in front of their cheery, cherry poses. Others asked the favour of a photo from a passerby.

It was all so normal. Except that it wasn’t normal at all. In the lee of the imposing stone memorial to Dr Martin Luther King, Jr, no black face was visible. Almost no foreign faces were present.

Instead, what was on display seemed to be Donald Trump’s America. Most people were in their ’20s and ’30s, white, American, and to judge from appearances, reasonably prosperous. The throngs of visitors were notable most of all for their startling lack of diversity.

There was, however, one other thing that stood out in the crowd: everyone was wearing a mask. No sociological, political, religious, moral or other expressions of defiant freedom or independence were visible.

It made a nice contrast with the day’s news reports of America’s coronavirus death toll passing 550,000 and governors in several states including Florida persisting in prioritizing commerce over public health as COVID restrictions are widely lifted – and just as pandemic-related hospitalisations and deaths start to surge again.

Maybe the homogeneity of normally diverse crowds was simply the result of cancelled school trips, pandemic-related travel curtailments and the financial exigencies of rising domestic unemployment.

Maybe the all-white all-American pastiche among the alabaster blossoms is a one-off, not to be seen again in Washington until at least the next global health emergency.

We can all only hope the explanation is the first one.

Not too far away from Jefferson’s Tidal Basin in Washington on Capitol Hill, a familiar scenario is being handled differently by the two major US political parties.

Twelve years ago, the eight-year run of President George W Bush’s presidential tenure ended as he was replaced in the White House by President Barack Obama and Vice President Joe Biden. Obama, clearly feeling that he had been elected to remedy America’s domestic sociological ills and inequities, prioritized wider and more accessible health care.

For the next two years, armed with a Democratic majority in the American House of Representatives and Senate, Obama pushed the Affordable Care Act, now and then known as Obamacare. And it became law.

Another high priority for Obama was securing support for his ambitious legislative agenda from the Republican Party in Washington. In this, the inspirational US President failed. Not only did the Republicans not support his legislative vision, but they also came to see Obama’s wish for bipartisanship as an exploitable weakness.

The Republicans racked up some impressive electoral gains in the 2010 bi-elections while managing not only to sabotage the rest of Obama’s legislative priorities but also to plant the seeds of “liberal, leftist, socialist” doubts in voters minds about the overall direction of Obama and the Democratic Party. Many still feel that Mitt Romney and the GOP squandered some major advantages in wasting a golden opportunity to retake the White House in 2012.

Obama’s search for elusive bipartisan support, while praiseworthy in theory, thus became a cancer of weakness on both his presidency and his political party.

Donald Trump’s election in 2016 was arguably a direct result.

Now, Joe Biden has retaken the White House with slender House and Senate majorities. He was a first-hand witness to the mistakes of 2009. Many observers saw in Biden’s initial, stated hope for bipartisan government a worrisome reminder of “Obama’s folly”.

But while Biden is still talking a bipartisan game and is still reaching out to more centrist Republicans especially in the Senate, it is already apparent that he has no intention of wasting time hoping for cooperation from Kevin McCarthy in the House or Mitch McConnell in the Senate.

The barometer of Biden’s thinking on this issue may be the filibuster, a dilatory oratorical device used by members of the minority party in the Senate to impede passage of legislation favoured by the majority. While senators were originally obliged to deliver interminable speeches in their effort to delay undesired legislation, more recently a senator can save his or her breath and simply signal their intent to invoke the filibuster.

First, he said he favoured the filibuster but only if senators actually reverted to delivering exhausting speeches to delay legislative action. Now, there is increasing speculation that he will heed increasingly loud calls from his own party to abandon the filibuster and cram his ambitious infrastructure, voting rights and other initiatives down Republican throats with the simple 51-50 majority that Georgia’s January election provided to him.

Meanwhile, Republican leaders, seemingly almost entirely bereft of ideas to offer for solving the nation’s problems, continue to focus on painting the Democrats as large-government socialists whose policies will destroy forever the American way of life as voters may imagine it still is.

As he digs in for another campaign of entrenched obstruction and obfuscation, McConnell and his Republican colleagues in Washington must still believe that this is the best course for his party. Still, like everyone else, he reads the polls that show even significant numbers of registered Republicans favour the massive government-funded pandemic relief being rolled out by the Biden administration.

But he also knows that he destroyed Obama’s initial advantage a dozen years ago and managed to blight Obama’s presidential legacy by employing the same strategy.

It’s up to Biden now to change the script.