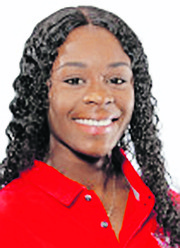 The University of Houston’s red shirt junior showed that she’s back in fine form after a two-year break to deal with a series of injuries as she posted a pair of victories for the Cougars over the weekend at the Houston Alumni Invitational.

Bethel ran the second leg on the Cougars women’s 4 x 400m relay that included Camille Rutherford on pop off with Cecilia Tamayo-Garza and Tristan Evelyn on third and fourth legs as they won in a meet record time of 3:49.01 to replace the previous mark of 3:49.79.

“I don’t have any goals time wise, but I want to be a collegiate record holder and I want to qualify for the Olympics and make the finals,” Bethel proclaimed. 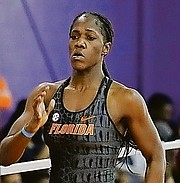 “I really don’t have any times in mind. I just want to run whatever time it takes to get those goals.”

And while she would like to book her ticket to Tokyo, Japan in July for the Olympics in an individual event, Bethel said she’s hoping her name could be added to the pool for the women’s 4 x 400m relay team.

“I feel if the Bahamas could come together and realize that we have this coming 4 x 4 team, we could go crazy in the Olympics,” said Bethel of running with such athletes as Shaunae Miller-Uibo, Megan Moss and Doneisha Anderson, just to name a few.

“We just have to get everyone to come together and everyone just being humble and just seeing that we have a good team. I know a lot of athletes just want to run their individual races. That’s why we don’t do too well in the relay.

“But if everyone could come together and realize that the Bahamas could win this 4 x 4, we could win. For real. We have the talent to do it.”

Right now, Bethel said there are also two of her team mates at Houston, who could also contribute to the team as well as the 4 x 100m relay, if they are selected.

She was referring to Jaszmin and Camille Rutherford, the daughters of Chad and Frank Rutherford. She said they could have the Bahamas to redevelop its status as a force to reckon with on the international stage.

Bethel said she would have liked to have her sister join her in the journey, but having graduated last year from Houston, she’s back in Grand Bahama.

However, Brittni returns to Houston from time to time and was there along with their parents, Claudette and Brian Bethel, along with her niece Abby in the stands for moral support at the meet over the weekend as she bounced back from her brief break on the track.

In 2019, Bethel had to red shirt her outdoor season after she messed up her knee. It carried over to 2020 when she developed Plantar Fasciitis and had to wear a boot on her foot.

She ran indoors in 2020, clocking 23.9 in the 200m, but of course the coronavirus pandemic ruined the remainder of the collegiate campaign.

Now she’s back healthy and looking forward to the future.

“I don’t have any injuries right now, so I’m really about that,” she stated. “I am looking forward to the end of my collegiate season and hopefully getting on this Olympic team and running in the relay.”