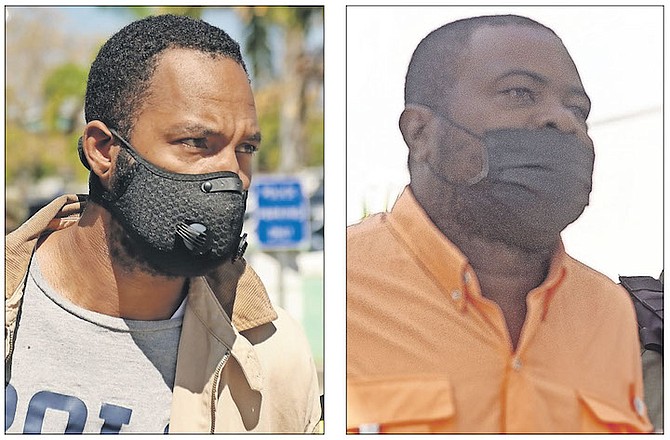 TWO men were arraigned in a Magistrate’s Court yesterday in connection with the recent seizure of more than $3m worth of cocaine which was recovered by officers during a drug bust in Eleuthera last week.

Police said Brandon Miller, 28, was found in Governor’s Harbour, Eleuthera with a quantity of cocaine they accused him of importing into the country on March 29.

They further alleged Miller, along with Johnnie Emil, 45, conspired to possess and import the “dangerous drugs” into the country, with the intent to supply sometime between March 22 and 29.

Last week, police said they received intelligence concerning an aircraft inbound to the country with suspected cocaine on board.

As a result, local law enforcement — assisted by the US Coast Guard, US Customs and Border Protection and the US Drug Enforcement Administration — launched a comprehensive investigation into the matter.

“Shortly after 12 noon (on March 28) this aircraft landed at (the) Governor’s Harbour, Eleuthera airstrip. As a result, our international partners along with our local law enforcement officers commenced surveillance exercises of the aircraft and the airstrip. Observed leaving the aircraft (were) two individuals,” Assistant Commissioner of Police Solomon Cash told reporters at the time.

“They were searched, however, nothing (was) found in their possession. That operation continued on into the night. As the surveillance team and a search team continued their operation at the airstrip, sometime this morning at 9am, that surveillance team and the operational search team recovered from the airstrip some six multi-coloured bags each containing a large quantity of suspected cocaine. I can tell you when we completed the count it was 155 packages with the street value of $3.1m.”

When Miller and Emil appeared before Deputy Chief Magistrate Andrew Forbes yesterday, they both denied the allegations and their case was adjourned to September 1 for trial.

Miller was granted $10,000 bail. However, the prosecution objected to bail for Emil since the Rock Sound native had been convicted of a similar offence in 2019.

As a result, Magistrate Forbes told the prosecution and Emil’s defence counsel to prepare affidavits so that he could review their arguments formally.

He said he will determine the issue of bail for Emil on April 12.