Alicia Wallace: Our Caribbean Cousins Need Help And We Should Not Be Slow To Provide It 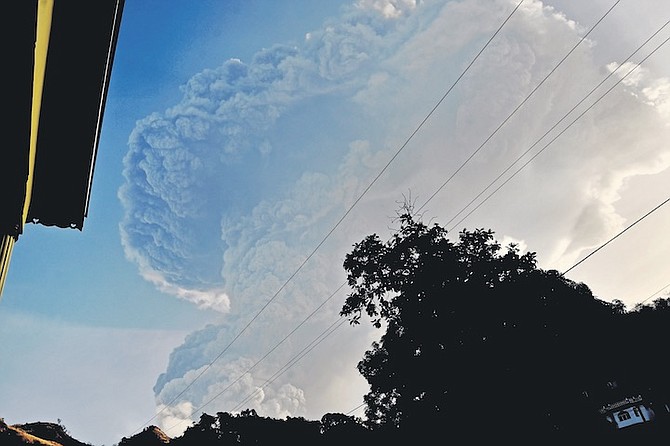 On Friday, April 9 there was an explosive eruption of St. Vincent and the Grenadines’ La Soufrière volcano for the first time since 1979. It sent plumes of ash 3.7 miles into the air. This came one day after the country’s Prime Minister Dr Ralph Gonsalves issued a Stage 3 disaster alert which was followed by an evacuation order to communities in the red zone. Early estimates indicated that 16,000 people—15 percent of the population—would be displaced as a direct result of this disaster.

Cruise ships were made available to transport people to Barbados, Grenada and St. Lucia which had agreed to accommodate them. Other countries in the region, including Antigua & Barbuda, St. Kitts & Nevis, Trinidad & Tobago and Guyana also indicated willingness to accommodate people evacuated from St. Vincent. The Barbados Defence Force has already been deployed to St. Vincent.

Barbados, 124 miles east of St. Vincent, has been affected by the ash fall from the eruption of La Soufrière. The Barbados airport is to remain closed until noon today.

Volcanic ash is a contaminant that includes very small rock, mineral and glass particles. It can be as fine as powder or grit-like and ranges in colour from light grey to black. It is irritating to skin, eyes and lungs. It can make roads slippery, cause electricity outages (which occurred in St. Vincent), contaminate water supply and cause roof collapse.

In her address to the nation, the Prime Minister of Barbados advised people to wear long sleeved shirts and long pants when cleaning the volcanic ash and to use shovels to collect the ash into garbage bags. She warned them not to wait for it to be over to start clean up because the ash accumulates, gets heavy, and it much more difficult to move when it gets wet.

Even as it experiences the effects of the volcanic ash fall, Barbados has committed to concrete support for St. Vincent and the Grenadines. Emergency supplies—with specific requests for water tanks, collapsible water bladders, folding cots, buckets, caution tape, field tents, blankets, bleach and liquid soap—are being collected at the HMBS Pelican Base of Barbados Coast Guard. Cash donations are being directed to the Caribbean Disaster Emergency Management Agency (CDEMA).

On Monday, there was another eruption, larger than the first and St. Vincent and the Grenadines’ National Emergency Management Organization (NEMO) confirmed the presence of pyroclastic flows along La Soufriere. A pyroclastic flow is a fast-moving collection of volcanic matter and hot gases of over 1500 degrees that burns anything in its path.

The government is drilling for fresh water that will be distributed by trucks because the volcanic activity is a threat to the water supply in St. Vincent and the Grenadines. The food supply, of course, is also compromised with forests and farms ruined.

Prime Minister of St. Lucia Allen Chastanet announced that arrangements will be made for children from St. Vincent to be accommodated in St. Lucian schools. In addition, the Government of St. Lucia has shared a home registration form allowing members of the public to offer accommodations to people evacuated from St. Vincent. On the form, people are required to note the number of bedrooms and bathrooms, number of people currently residing in the home, and the number of people they are willing to accommodate in various age groups. They can also state whether or not they can host people with disabilities and how long they can accommodate people.

St. Kitts and Nevis pledged financial assistance for evacuation from St. Vincent in the amount of $370,000. The country also welcomes 300 people in families of two or three members and is contributing $20,000 to the Caribbean Disaster Emergency Assistance Fund to be used for immediate assistance in support of logistical operations for St. Vincent and the Grenadines.

The statement referenced “the support of the Caribbean Community during Hurricane Dorian,” but stopped short of offering more than mere words St. Vincent and the Grenadines.

There is a long road ahead for St. Vincent and the Grenadines. The country must reallocate resources in order to meet pressing needs today. It has to make decisions on which groups of people should be accommodated, safely navigating a number of processes in the midst of a global pandemic.

Even more than before, people, including children, need masks. Clean-up will be a long, ongoing process. The effects of the ash fall on agriculture need to be assessed. Individuals and families are forced to abandon their homes and settle elsewhere, starting over.

When Hurricane Dorian devastated Grand Bahama and Abaco, the response from the Caribbean community with swift, strong and generous. Countries stepped up to offer every form of assistance possible, from rescue and cleanup to advocating for International organizations to fund relief efforts in The Bahamas. Non-governmental organizations took the lead in supporting people by providing supplies and coordinating accommodations while Caribbean States deployed humanitarian aid and lobbied for more resources.

We know that Hurricane Dorian was unlike anything we had ever seen and that we are likely to experience similar events as climate change keeps us in precarious state. We have been able to rely on regional solidarity, and we must ensure that it is not a one-sided relationship.

Even if we are not in a position to commit to financial assistance, we should be willing to send the Royal Bahamas Defence Force to assist on the ground. We should be sending supplies. Our airport is open and we receive cargo on direct flights from the US on a daily basis.

We are in a position to do more than issue empty, lazy statements.

We cannot be satisfied with this, and we need to demand more. The people of St. Vincent and the Grenadines need and deserve real support.

Prime Minister Minnis seems to have recognised his weekend statement was not enough when he told parliament on Monday his government was looking at providing financial aidand “whatever assistance we have”. Let’s hope so- and quickly

Non-governmental organizations in St. Vincent and the Grenadines are working to provide relief to community members. Among them are RedRoot SVG, led by Phylicia Alexander, which focuses on women and children who are survivors of violence and Rise Up Bequia led by a team which includes former Chief Curator of the National Art Gallery of The Bahamas Holly Bynoe. Both organizations are accepting monetary donations to support the purchase of food and other necessities. They are also accepting emergency supplies and masks are at the top of list. The N95 masks are preferred and needed in all sizes and in large quantities. Donations to RedRoot and Rise Up Bequia can be made at tinyurl.com/redrootrelief and tinyurl.com/riseuprelief respectively.

Unfortunately, there is a logistical and cost barrier to collecting items here and sending them to St. Vincent and the Grenadines as the Government of The Bahamas is not facilitating cargo transport. For those based in The Bahamas, it is best to make monetary donations or contact groups in other countries that are able to send supplies. These include Is There Not a Cause (ITNAC) and Feminitt Caribbean in Trinidad, KLC Shippers in Toronto, 1545 Nostrand Avenue in Brooklyn (accepting items until April 18), and Oxygen Mas SVG (with donation drives in New York, Trinidad, Barbados, Toronto, and Antigua), and a Florida carnival team is hosting a drive-by drop-off event on Saturday at 1381 NW 129th Avenue, Soccer Town, Pembroke Pines. Other efforts are being announced every day and can found using #LaSoufriere

Our most incompetent and power-juiced PM wants us, a financially broke Bahamas with so many Bahamians now unable to afford food for themselves and their young children, to help him make himself look good on the Caribbean/CARICOM political stage. The sheer arrogance shown here by Minnis is a manifestation of his most uncaring attitude towards many suffering Bahamians who are struggling the greatest of hardships at this time.

For Minnis, being PM of the Bahamas is all about helping foreigners, whether they be the greedy cruise ship companies, his Communist Chinese friends or other island nations in the Caribbean that have unfortunately fallen victim to a natural disaster. Yes indeed, Minnis is seizing an opportunity to beat his chest among his fellow Caribbean leaders when they all know only too well how he has grossly mismanaged the economy of the Bahamas and bungled, or should I say botched, the handling of the aftermath of Hurricane Dorian and our COVID-19 crisis.

If I were the national leader of either St. Vincent or Barbados, I would quickly tell Minnis he really needs to do a much better job of looking after his own people before seeking limelight for himself on the Caribbean stage. Minnis should simply stay well out of the way of the assistance currently being provided to St. Vincent and Barbados by other nations (including the US) that can afford to lend a generous helping hand in their time of need. Meanwhile, Minnis must start thinking much more about how to design and implement policies to help struggling Bahamians and local businesses in the midst of our nation's perilous economic crisis, and much less about his personal image abroad.

You usually have my agreement in your well-worded posts, but I do wish you would lay off of China. The adjective "Red" is a bit antiquated . This is The Bahamas, not the US of A who must always have a bogey man country or two, or three or four on which to blame for its own short-comings. The bottom line is: help should always be extended to the best of one's ability. Minnis should reach into his own pockets to assist St V and the G's. (Continued Minnis-bashing is completely understood!!).

For a couple of decades now our senior government officials, including our educators at UB/COB, have been wooed by sinister representatives of the ruthlessly evil CCP into thinking Communist China will be our country's most important friend and 'fall-back' saviour. That's a most dangerous fallacy as many smaller nations around the world have already learned the hard way. 'Red' China was of course coined for the Communist China created by the so called 'people's revolution' led by Mao, which today, under Xi's regime, is even more sinister and ruthlessly evil than it ever was back then. And yes, history can be terribly "antiquated", but it's always best remembered and learned from, rather than forgotten.

You people are so sick. How soon you forget the Hurricane of just 3-4 years ago. Summer is coming

Bahamians will be eternally grateful for the critical assistance received from the US, US NGOs and Jamaica in the immediate aftermath of Dorian. But many Jamaicans at the time rightfully questioned whether the assistance provided by their government would result in many needy Jamaicans receiving less assistance back in their own country, and the US providing less assistance to Dorian victims than it might have otherwise done. There certainly was an unfortunate logistical coordination nightmare in the immediate aftermath of Dorian which will not be soon forgotten as it seriously hampered the relief effort on many fronts.

Ridiculous tax increase, keep minimum wage at $5.25 an hr inspite the increase of taxes, promise affordable homes only to young professionals and not the rest, give public an uncertain vaccine to test out, lockdowns to fight crime and depend on tourism to tackle the unemployment rate.