Nurses warn it's too early to remove testing for vaccinated travellers 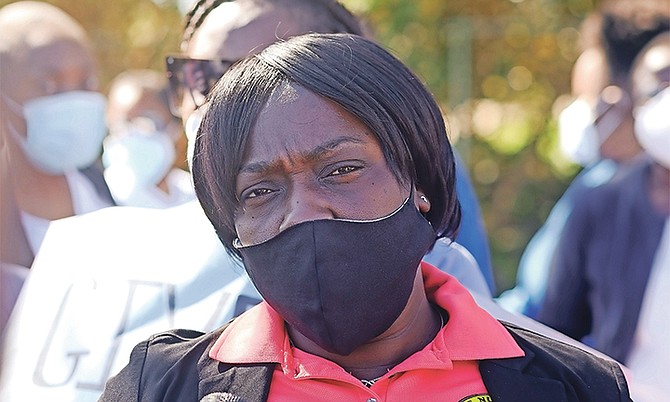 BAHAMAS Nurses Union says it disagrees with plans to remove the COVID-19 testing requirement for fully vaccinated travellers believing there is no guarantee people won’t contract or spread the virus even after receiving two doses of the vaccine.

This comes after Prime Minister Dr Hubert Minnis announced on Wednesday that fully vaccinated people can travel to The Bahamas without a negative COVID-19 RT-PCR test starting May 1.

He also said fully vaccinated travellers within the country will be exempt from the testing requirements when travelling to and from New Providence, Grand Bahama, Abaco, Exuma and Eleuthera.

Vaccinated people will also get other benefits, like participating in indoor dining.

Speaking to The Tribune yesterday, BNU president Amancha Williams said she didn’t believe the move was a “smart decision” on the government’s behalf and added that now is not the time for the country to let its guard down against the COVID-19 threat, especially numbers catching the virus are rising.

According to Ms Williams, the uptick in both new cases and hospitalisations has placed a strain on the nation’s healthcare system—something she said shows why it’s so important for the country to still have certain COVID preventative measures in place.

However, by removing the current COVID entry requirements for vaccinated people, Ms Williams said the government is taking a risk that could potentially create problems for the nation later down the road.

“I think we need to still take precautions until we see our way out from this third wave,” the union president said. “We have to remember that as a country that we can’t guarantee anybody nothing. We are on trial and error and we don’t know the behaviour or reaction of this vaccine and so there are still precautions to be taken and we must do an ongoing survey so we can know how this virus behaves with the vaccinations.

“We’ve been seeing reports in the US that people are still getting and contracting the virus so you don’t let your guards down. It’s better to be safe than to be sorry, “ Ms Williams added.

The US Centres for Disease Control and Prevention said last week that it had reports of nearly 6,000 “breakthrough” COVID-19 infections out of more than 77 million fully vaccinated people, suggesting such infections only affect a small percentage of inoculated people.

The union president also advised the Minnis administration to follow the example of other countries which have set out certain recommendations for fully vaccinated people wanting to travel to other destinations.

She referenced the CDC’s recommendation that vaccinated people still get tested three to five days after travel among other things.

“The CDC has even given recommendations for fully vaccinated people because there are still risks from before and after travelling. Before you arrive in the United States and after you travel, they say get a viral test three to five days after travelling. They also say while you’re traveling, wear your masks over your nose, avoid crowds, stay six feet away etc.”

She also said that Bahamians need to be fully educated about COVID-19 vaccinations to ensure that they do not get the impression that vaccines will completely protect them against the virus.

To date, more than 21,000 people in The Bahamas have received their first dose of the Oxford-AstraZeneca vaccine since the country began its vaccination campaign in mid-March. The AstraZeneca vaccine is said to have a 76-79 percent efficacy rate.

Yesterday, Ms Williams told this newspaper: “Even though you’re vaccinated, you could still be exposed and convey this virus to someone so all of that, people need to be educated about this virus and vaccinations and we have not been seeing a lot of that happening.”

With the nation now battling its third wave, Ms Williams said it’s important for Bahamians to continue following all the health protocols and not become relaxed with the rules that are meant to keep Bahamians safe.

Asked how nurses are coping with this new wave of infections, she said there is still some exhaustion among workers as they have never fully recovered from the two COVID waves.

“At this point, they were burnt out from last year. They haven’t really had a real break because they’re not only taking care of their patients but also their loved ones and so nurses were impacted all around—their social life, their private lives were impacted,” she said.

Since March, The Bahamas has seen an uptick in positive cases, with total infections now at 9,926 after 58 new infections were recorded Wednesday. Of those cases, 504 are still active.

Meanwhile, 50 people are said to be in hospital sick with the virus.

Health officials have recently linked the spike in cases to international travel and a relaxed adherence to the current rules.

thank you for you sevice , now we will continue to move on. I want to travel, but it is too expensive and stressful to pay 150 dollars and 40 dollars for a health visa. i got the shot , so i can travel. we must work around this and life must go on.

In light of its mass vaccinations exercises, the CDC is still grappling with how to best get the Johnson and Johnson vaccine back into production and back to be jabbed into the arms of humans. The vaccine was paused eleven days ago when some (mostly women two of whom have died) who took the vaccine developed blood clots among other side effects. One thing the CDC is considering is giving additional warnings to persons who take the J&J vaccine (disclaimer). Another plan is to restrict the classes of patients the J&J vaccine is offered to (age and sex considered).Up until the complications arose many preferred the ‘one shot’ vaccine, especially now that some manufacturers of the other vaccines are hinting at a third jab.

Obviously the PM didn’t think it through when he said persons who are fully vaccinated will not be required to take Covid tests. What he did not say is that Americans who travel abroad will have to take tests to re-enter that country, whether they are vaccinated or not. And another who spoke out of pure idiocy is the Dr William Schaffner, of the CDC, who suggested that persons who are fully vaccinated will no longer be required to wear masks. This goes strictly against the science that says the masks is the greatest defense. And the science also says fully vaccinated persons can also contract of spread the virus.

sounds like you are the one with all the answers! the CDC and the Bahamas government should hire you! ahha!

There is an ongoing conflict between health professionals and financial professionals about tourism entry requirements. Due to the harsh rules our visitors have dropped 95% and our major economic activity has collapsed. We cannot continue for much longer on this path. The way things are now even visitors who want to come mostly cannot fulfill the requirements within five dsys. There are too many hassles and people who are travelling are going elsewhere. If we had only allowed visitors and returning residents to bring a Covid19 test result with them and had not imposed the Health Visa and five day arrival from test we would have had far more visitors and our economy would not have suffered so much. Keeping people away resulting in mass unemployment is not the answer.

and removing all restrictions and pretending everything is back to normal will take us back to July-1 when we also "had" to save tourism.

The best idea I've heard yet is mass testing. it's the sensible thing to do

no the best thing is vaccine not testing,

Their concerns are legitimate. But lets face the facts, testing proves nothing except your status at time of testing. Everyone entering the country must be negative according to PCR testing yet we have had numerous cases attributed to travel. There has to be some consideration of the economic effect of these restrictions.. future generations of bahamians will carry a heavy burden because of the cost of this pandemic here. Lets strike a balance, no PCR test to enter, but still wear mask maybe?

What the nurses were waiting for. An intelligent report on all vaccines. Not having questionable danger shoved into our shoulders that was not even tested on rats and dogs..human guinny pigs and test dummies are for desperate elitest millionaires looking for greater profits, and not saving lives - closing foodstores and also starving us to save our lives. Only the DNA is listening to our nurses and unions.

I still gat the furl for ya. make that head cover extra good for you

Maybe more of the medical professionals will choose to get their jook instead of hiding behind beaurocracy. A nurse who turns down a vaccine for non-medically based reasons is just asking for trouble.

Nurses have herd intelligence. The are not slaves and adult enough to choose which vaccine they take. They are not cattle locked in a pen to be branded by Hitler with a yellow star of David as Jew or non Jew. We loose all rights as citizens in the Bahamas unless we are vaccinated then become herd test rats, monkeys. Not even animals were tested as dummies. Smart people were. You get medically distressed you are on your own. Test dummies. CRUEL of our medical leader.