DIANE PHILLIPS: Taking the elitism out of sports 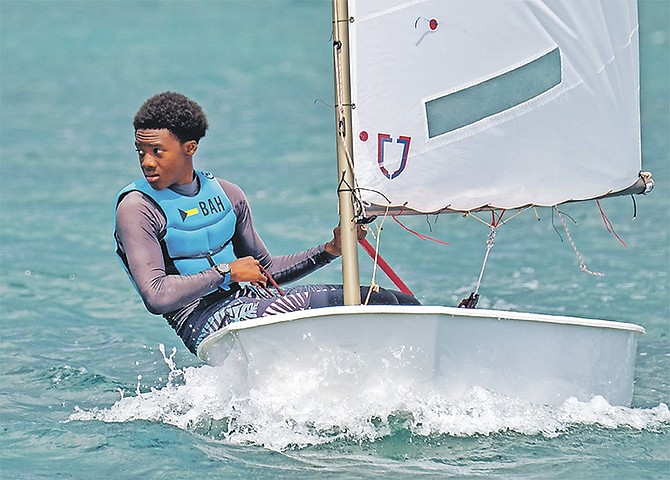 JOSHUA WEECH, 14, of Capstone Academy, the only Bahamian to make it into the gold fleet at the Optimist NA Championships.

Inner city kids get a shot at a private tennis club.

THERE are some sports that only the wealthy will ever be able to afford, like polo. Despite polo’s best efforts to convince a dubious public that it is not just the sport of kings, the reality is that with a team switching horses several times during a single match and each horse running what Forbes estimates to be $45,000 not to mention the costs of the athlete riding it, polo is never going to be everyman’s sport.

But the field around other sports once considered elitist is changing and in The Bahamas you do not have to look very far to see and applaud the changes. In tennis and in sailing, the playing field is levelling rapidly as coaches and instructors reach deeper into the inner city to find talent and students respond. You can see it any Thursday afternoon at Montagu or race weekends, the changes right before your eyes. What you can’t see is the impact those changes are making on young people’s lives.

The playing field is levelling in once elitist sports where the wealthy wore all white on a tennis court or sailed one-design boats that cost a whopping gulp and both sport and the people who participate in it are better for it.

Take Gabriel Newbold, for instance. “He came to us as a very shy youngster, who stuttered and felt uncomfortable around others he didn’t know,” Robert Dunkley tells me. “Within a short time, I had him helping me with presentations to groups like Rotary. The self-confidence, knowledge and discipline he has developed through sailing have helped him tremendously and today he is with the Maritime Academy where he is studying and working towards his Master Mariners License (Captain of a ship).”

Dunkley is the director of the Bahamas National Sailing School, a non-profit run out of the Nassau Yacht Club and Royal Nassau Sailing Club in conjunction with the Bahamas Sailing Association. More than 2,000 students have gone through one of its programmes over a 10-year period. Joshua Weech started sailing when he was eight-years old. Today, at 14, he is the only Bahamian sailor to ever make it into the Gold Fleet at the Optimist North American Championships. He’s competed in two Optimist North American Championships, the Optimist World Championship and South American Championships in 2019 and is The Bahamas’ top Int’l 420 sailor. Another standout, Paul de Souza is training, aiming for the next Summer Olympics. He’s on the sailing team at the College of Charleston on scholarship along with two other Bahamians from the Bahamas National Sailing School, Brent Burrows and Christopher Sands. Three others, Spencer Cartwright, Tristan Eldon and Jaxon Parker, are on sailing scholarships at other universities.

About a third of the sailors are female. Ivanna Seymour started in her early teens and fell in love with the sea. She graduated from St Augustine’s College, went on to Holland College on Prince Edward Island in Canada to earn her Bridge Watch rating certification. The next year, she became a deck cadet on the MV Legend of Dean’s Shipping, a year later she joined Campbell Shipping, did 36 months of sea time, went on to earn a degree in the UK in Nautical Science. Now with a Chief Officer Unlimited License, she is a ranking officer with Royal Caribbean and intends one day to be the first female captain of one of its ships.

Back on land, coach Cory Francis enlists support of people like Kit and Lesley Spencer to run a weekend tennis programme that gives kids from his home turf of Saxons Valley the opportunity to play at courts from Lyford Cay to the Nassau Lawn Tennis Club.

It’s a fascinating concept – the kids, ages seven to 13, are driven to their different sites by police in those big black SUVs usually reserved for high-ranking officers.

Two coaches donate their time to the tennis experience and supporters like the Spencers help make it happen. You may remember Kit Spencer from the fund-raising that resulted in the National Tennis Stadium when he and Tommy Turnquest pounded the pavement looking for donations, funding the construction of one court at a time.

On a recent Saturday at the hideaway historic Lawn Tennis Club, the oldest clay courts in continuous play in the Western Hemisphere, Spencer said he was impressed by the positive energy and appreciation.

“The kids really seemed to enjoy the experience. After the training sessions were over, they swept the courts and cleaned the lines in the same way our members do. One even asked for a mop as she thought their shoes had left some clay dirt on the floor of the ladies changing room. One of the girls had seen the library of old books in the ladies changing room and politely asked if she might have a book to take home and read. This was of course granted but unfortunately most of the books are not really that suitable for seven to 13-year-olds. Apparently, Harry Potter would be a favourite.”

To be honest, sports are so broad-based in The Bahamas that I had never given a thought to one being more elitist than the other, seeing as how we don’t have polo, until the phone rang one day and it was Mike Sands. When Mike Sands - former two-time Olympian track star, head of the BAAAs, first Bahamian president of the NACAC - calls, I listen.

He said he was following my campaign (it’s not just mine, Mike) to make sailing the official national sport but he did not think it qualified because not every kid can do it. He cited baseball in the US being the official American sport because baseball fields are everywhere.

Here’s my rebuttal to Mike, whom I will always respect and admire. Wrong, Mike. It’s less expensive to buy a fleet of small boats that all schools can share for a rotating sailing programme than it is to build a baseball field or stadium or put a track course at every school. Not every child has to own a boat, they take turns sailing in a fleet of boats. There’s certainly enough water to sail in and last I checked, admission to that was free.

So for all those truly well-meaning, but doubting like Mike Sands who believe sailing is too elitist to become the official national sport, despite the fact that Sands helps with the sailing school’s programme, think about what it has done for those kids in college on sailing scholarships, for the 2,000 who have learned discipline and teamwork and a love of the sea. Think about Gabriel Newbold or Ivanna Seymour who one day may be the first female captain of an Oasis class ship.

Here’s how Dunkley put it: “It is living proof that sailing is not just for the wealthy but for ALL Bahamians. All these youngsters need are caring parents and the knowledge that Bahamas National Sailing School and sailing clubs throughout the islands are there for them. It is not a matter of money.”

But still happy to hear from you any time, Mike. Will always hold you in high regard.