Families Tell Of Trying To Find Loved Ones 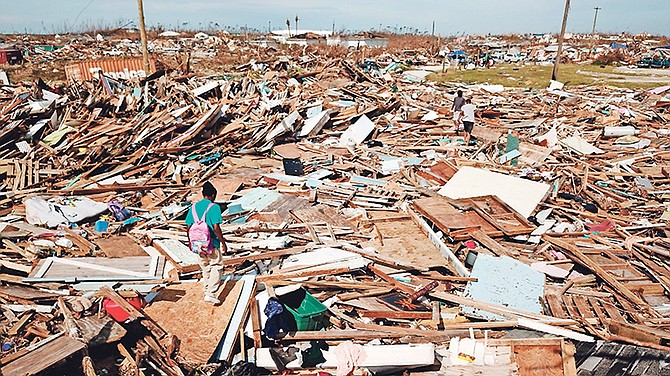 SEVERAL witnesses testified in the Coroner’s Court yesterday about their efforts to find missing loved ones after Hurricane Dorian passed in 2019.

Among them were Maline Laguerre-Alteme and Natasha Laguerre-Taylor, who both testified about the missing status of their loved one, Alphonse Laguerre.

They were are among several people who gave testimony via Zoom yesterday for the Coroner Court’s inquest into the presumed deaths of people reported missing after Hurricane Dorian.

Mrs Laguerre-Alteme, wife of Mr Laguerre – with the aid of an interpreter – recalled how her husband refused to leave their home in The Mudd with her and their daughter for shelter at a local church in Marsh Harbour before the storm.

Mrs Laguerre-Alteme told the court that the last time she spoke to her husband was on August 31, the day before Dorian.

The Abaco resident said he told her he would stay with his sister who lived in Murphy Town.

However, Mrs Laguerre claimed when she asked her sister-in-law about her husband’s whereabouts after the storm, she told her that she never saw him because he never came by the house.

Meanwhile, Mrs Laguerre-Taylor, daughter of the victim, testified how she urged her father to leave the house while speaking to him on the phone the morning of the storm.

“I asked him where he was and he told me inside the house and he said the hurricane was bad,” she told the court. “I told him I would come for him because we have a car.”

However, Mrs Laguerre-Taylor claimed that her dad never got the chance after waters surged through the house, forcing him to seek shelter in the roof.

“He called us back and said he was inside the roof and I told him he cannot stay in the roof… but he said he could not come down because the water was rising,” she said.

The Abaco resident told the court her dad was not a swimmer and said she believed he died because he could not swim.

Asked if she submitted DNA to police to assist them with locating her father, Mrs Laguerre-Taylor replied that she did, but noted that she has not as yet been contacted by police of a match.

Mr Dawkins, who was living in New Providence at the time of the storm, recalled how he travelled to Abaco to search for his dad after not receiving word from him during or after the storm.

Mr Dawkins said he had initially instructed his relatives on the island to locate his father’s whereabouts, but told the court they had no luck.

Asked what he saw when he arrived at his father’s home, he replied that the roof was off and the windows were gone.

Mr Dawkins said he believed his father was killed after the woman who was living with his father told his mother that he was taken out to sea during a storm surge.

Ms Swain told the court she was on vacation during the time the storm hit.

Ms Swain said after not hearing from her son, she contacted her cousins to find him.

But she said her cousin had informed her several days later that her son had passed away.

Ms Swain said she was told her son’s body had been collected by officials and placed in the trailer but added she did not know what they did with the body.

However, in response, Coroner Jeanine Weech-Gomez insisted that if her son’s body was found, he would’ve been released to her.

The coroner said she wanted to dispel the perception that police were trying to keep her son’s body away from her.

“Don’t believe everything you hear…They would’ve never withheld your son’s body if he could’ve been identified,” she told Ms Swain.

Emily Bethel also testified during yesterday’s hearing. Mrs Bethel said she filed a missing report on October 2019 after she was unable to locate her aunt and uncle – Juanita Lowe and Lee Roy Lowe – after Dorian hit the island.

However, Mrs Bethel said that after the storm, she was later told by her son that the house was gone, with only the foundation left.

Mrs Bethel claimed that she saw a picture of her aunt’s body lying on a flatbed truck, but was not questioned on the issue during yesterday’s inquest.

Asked if any DNA samples were taken from relatives, Mrs Bethel replied that her mother, her aunt and uncle’s eldest sibling, submitted DNA the same year.

However, she said they have not yet heard back from police on the matter.

Dorian hit Abaco on September 1, 2019, as a Category Five storm. The storm’s official death toll is 74, however many believe more people remain missing.

The inquest continues today at 10 am.