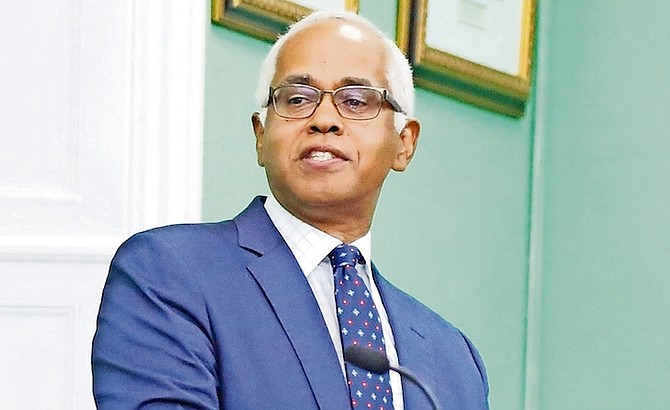 Dionisio D'Aguilar, minister of tourism and aviation, told Tribune Business that concluding negotiations over Freeport Harbour's redevelopment - including the addition of new cruise berths - was a "condition precedent" that must be satisfied before the joint venture will acquire the resort from the Government.

Suggesting that the Government nevertheless "remains optimistic" that the Grand Lucayan's sale will eventually get over the line, he said he had been "advised" that an agreement between ITM/Royal Caribbean's Holistica joint venture and Freeport Harbour Company - the latter which is 50/50 owned by Hutchison Whampoa and the Grand Bahama Port Authority (GBPA), the former having management control - was "imminent".

"One of the main reasons this deal has not been able to come to a conclusion is there is a condition precedent, and the condition precedent is for Royal Caribbean and Freeport Harbour Company to seal their deal, and that has not happened," Mr D'Aguilar disclosed to this newspaper.

"Once that happens that triggers the ability to seal our deal. They want to get their deal done to make sure they have a place to go. It's extremely frustrating that Freeport Harbour Company and Royal Caribbean have taken this long to seal a deal. It's obviously impacted our ability to conclude our negotiations with Royal Caribbean. We can negotiate all we want, but this is a condition precedent of theirs.

"They don't want to purchase the hotel and real estate, and buy into that, and end up not getting a deal at the port. They want to get that done. Clearly it's frustrating that this has not concluded yet. We wanted it to conclude, but remain optimistic it's going to happen," the minister continued.

The sales agreement for the Grand Lucayan was signed just weeks before the COVID-19 pandemic, and its associated lockdowns and restrictions, hit The Bahamas. This, coupled with the cruise industry shutdown, inevitably delayed the deal and resulted in some terms being renegotiated, but the protracted wait since has led many to question whether it will still go through.

Tribune Business understands that the Government had been hoping for a July 23 closing, but that date came and went, with the Grand Lucayan now looking likely to drain the taxpayer by more than the $3m subsidy allocated in the 2021-2022 Budget.

Besides the Grand Lucayan’s purchase from the government, the Royal Caribbean/ITM proposal also calls for the addition of new cruise berths at Freeport Harbour as well as the creation of a water-based adventure theme park for the thousands of passengers that the cruise line plans to bring to Freeport on an annual basis.

That means the Holistica partners have to strike a deal with the Hutchison-controlled Freeport Harbour Company, as well as the Government. Closing on one before the other would give either Freeport Harbour Company or the government the power and negotiating leverage to squeeze more concessions from ITM/Royal Caribbean knowing that the joint venture will be increasingly desperate to wrap up negotiations on the last component for its project.

Russell Benford, Royal Caribbean’s vice-president of government relations for the Americas, acknowledged to Tribune Business in June that many Bahamians are increasingly disbelieving that the resort’s redevelopment will ever happen but said the cruise line’s ambitions suffered a major hit when the entire industry was shutdown by COVID-19.

While asserting that Royal Caribbean and its ITM Group partner were “close” to sealing the deal for Freeport’s former ‘anchor resort’ property, he also confirmed that talks with Hutchison Whampoa over the accompanying redevelopment of Freeport Harbour also have yet to complete.

Mr Benford reaffirmed that Royal Caribbean/ITM, and their Holistica joint venture, remain intent on completing both deals at the same time. He added that the government’s acquisition of Grand Bahama International Airport from Hutchison-controlled Freeport Harbour Company had also given the partners greater confidence to move forward given that the facility was the hotel’s airlift “lifeline”.

“I think we’re close. I’ve been saying that for quite some time, I realise that,” Mr Benford told this newspaper in a nod to the protracted negotiations. “I’m hopeful that we close this summer, and I think we’re down to a handful of documents that need to be reviewed and a couple of financial instruments that have to go through the legal process, but we’re getting there and are hopeful of a summer closing.”

Acknowledging the frustration among many Bahamians that the Grand Lucayan sale has yet to complete, with many now adopting a “believe it when we see it attitude”, Mr Benford pointed out that the deal - which took place just weeks before the COVID-19 lockdown - had been derailed by the pandemic.

With Royal Caribbean incurring billions of dollars in losses following the 15-month shutdown of the cruise industry, he explained that the cruise line remained committed to the project but will have to adopt a more phased approach to construction and redevelopment as cash flows allow.

“I think the timelines have shifted a little bit,” Mr Benford said. “We are not able to be as aggressive as we’d like with reconstructing the project at once. We have to do it in phases and explore what we can do. It’s taken us a bit longer to negotiate with Hutchison... COVID-19 was a tough time for all of us and to do business.”

IT never made sense for the FNM Government to purchase the hotel. Pay the severance and claim they were selling the hotel.

The FNM Government is not a real estate agency. Now they have all kinds of excuses something is very wrong with this Our Lucaya deal

It is my hope that the TRUTH will come to the light..

The FNM government say they are waiting for Hutchison to close a deal at the harbour the deal would have been completed. If the cruise line had purchased the hotel from Hutchison.

IT just can not get any dumber than this. But then there is their OBAN deal

Man please. Even if they close the deal today RCCL doesn't have the money to begin construction. What we need to know is how long after the sale will we see any activity....

Proudandfnm the sale has to come first.. You know like the eggs before the chicks.

Readers these hereto Tribune readers comment pages can recall was a year back when I first started askingIf true the central government did, in fact, become the beneficial owner Ten (10) percent of the GBPA, whatever happened to those shares, yes?

Do 'Commas & Colons' come before or after "Dotting the i's and Crossing the t's' ? This deal isn't going to happen any time soon. If this deal doesn't close before the upcoming election and the PLP win, you know they're going to want to put their own mark on it.

Government needs to stay out of private business !!!

The bottom line here is Minnis, D'Aguilar and 'Dr.' Scott have orchestrated a situation in which the Bahamian government is being held as a 'willing' hostage in an elaborate extortionist scheme whereby the Bahamian people are literally being robbed blind by Royal Caribbean, Hutchison Whampoa and the owners of the Grand Bahama Port Authority.

More bluntly put, Minnis, D'Aguilar and 'Dr.' Scott are overseeing their foreign friends give the Bahamian people a mega million-dollar royal shafting of the worst possible kind. The stench of the corruption behind the secret wheeling and dealing involving the Lucayan Property, the Freeport Harbour and the Paradise Island land leases is most nauseating to say the least.