Alicia Wallace: We Vote In A Broken System Which Fails Us And The Options In Most Cases Are Terrible 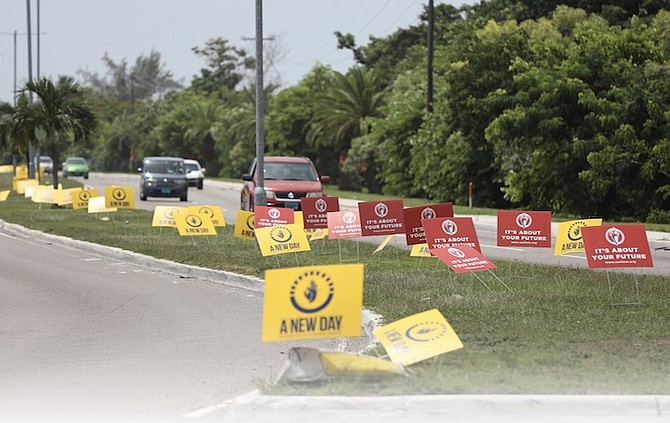 THE signs are here – and they are terrible. The uninteresting, uninspiring, unsightly lawn signs litter New Providence with red, yellow and not much else.

The Progressive Liberal Party’s “A New Day” signs and the Free National Movement’s “It’s about your future” add nothing to the political discussion and give no information on party platforms.

The FNM and PLP are continuing the lazy habit of pointing fingers at each other and campaigning on not being the other party. That does nothing to help voters to make important decisions about what they will do in the booth, but it has, over the past few decades, been enough for the two parties to take turns.

They tag each other in every five years after they completely lose the trust and incur the wrath of the electorate. This time around, we are looking at the same terrible options we had in 2017, but with more at stake.

By now, we know it actually is important to have a Prime Minister with public speaking skills. That is a part of the job and not one that we can ignore. When Minnis became leader of the FNM, this issue was raised and FNM supporters waved it off, accused anyone critical of Minnis of being a PLP supporter and insisted public speaking was not important and Minnis would be a good change from verbose Christie.

We went through years of disrespect from Minnis and his entire administration, then sat through Minnis’ address following Hurricane Dorian. That, for many people, was the moment that it was most obvious he is a terrible speaker and we do, in fact, need a Prime Minister who is able to address the public with appropriate language, attitude, tone and presence.

Now, as the COVID-19 pandemic rages on and we struggle to strive, we are subjected to even more of his addresses. The content seems new to him every single time and his tone is akin to one that may be used to read a story to kindergarteners. It is difficult to believe he knows what he is talking about, wants the best for the country, or cares whether or not we understand what he is saying and why.

FNM supporters often say, in Minnis’ defence, that he has had a difficult term because of the crises of Hurricane Dorian and COVID-19, but he was an appalling Prime Minister and abysmal communicator before either of those events.

Unfortunately, the leader of the PLP is no better at communication. It is clear he is committed, like many previous leaders of the opposition, to simply disagreeing with whatever the Prime Minister says. His comments over the past four years have lacked substance and, in many cases, left us wondering what he was trying to say.

Most people admit that they have no confidence in Davis and do not believe him capable of leading the next administration. Even those who are dissatisfied with Minnis do not want to cast their votes for Davis. Neither party leader deserves our votes.

We find ourselves in this position again and again, not knowing what to do with the one vote we have. We know the leaders of the FNM and PLP, we hear empty rhetoric from the other party leaders every now and then, and none of them have engaged us in conversations about the way forward.

Once again, we are stuck with parties that are doing nothing more than pointing fingers at the FNM administration while it tells us it has a rough four years and hopes we will stop talking about the unfulfilled promises (including a fixed election date and term limits for the Prime Minister). None of the options even prompt a neutral response, and part of the issue is the electorate is not able to participate in the nomination process. Candidates are thrust upon us, and we are expected to choose from the selection that is predetermined by a small group of people.

We, quite obviously, need a different system. We say it often, but we have done very little work to get there. It requires research, imagination and collaboration at the very least.

The people benefiting from the antiquated, frustrating system are few, but they are in touch with one another, communicating and keeping it together. The rest of us need to be just as coordinated and cooperative to create what we need and have it implemented. Maybe this is the election that propels us in that direction and we, across party lines, can come together based on this shared interest and use our collective power to make the change.

For now, we must vote. The options, in most cases, are terrible.

We may have moved, to a certain extent, away from party voting, but we still want our vote to count toward the Prime Minister, often to the detriment of our constituencies. In the current, very flawed system, a vote for a candidate for Member of Parliament becomes a vote for that member’s party leader. This time around, we may need to put that aside, focusing on the microlevel, prioritizing our communities.

Voting in the upcoming election, we have two options—go the same old route and vote for (or, in most cases, against) a party or party leader, or put in the work and find out who all of the candidates are in our constituencies, find out what you know about them, contact them and ask their positions on critical areas, and vote for the one most likely to represent our concerns.

I highly recommended voting to support the best candidate in your constituency or spoiling your ballot to register your discontent with the options available to you. (If you do not understand the option to spoil your ballot, you can easily find more information by searching for the Out Da Box 242 campaign which ran ahead of the 2017 election).

It is okay to vote for independent candidates and those representing parties that are not the FNM or PLP, as long as you are clear on their priorities, areas of interest and willingness and ability to represent you and raise the issues affecting your constituency.

There are many areas of concern for us right now, and we need to ask candidates for their positions, their plans, and how they will execute them. We need to be prepared with our questions, and they need to be prepared to answer. It is not enough for candidates to spew rhetoric and simply agree with what you say. You need to know that they have thought about the issues that are affecting you and your constituency, and that they are aware of the position of their party or other supporters. Be clear on their plans to address the issues. Whatever your areas of concerns may be, you need to ask the candidates in your constituency:

• What is your position on this issue?

• What is the position of your party on this issue? (If applicable)

• What is the solution you propose?

• How did you arrive at that solution?

• Who will oppose this, and how will you respond?

• What other challenges do you expect to face?

• What resources are required? How will you access them?

• What kind of support do you need from the constituency (beyond voting)?

• If your solution is blocked or fails in some other way, what is the next course of action?

Any candidate serious about being a Member of Parliament is aware of the issues facing the constituencies they want to represent. They ought to have more than ideas. Demand that they articulate their plans. Find out how much thought they have put into it. Determine whether or not they have the ability to assess the environment, engage stakeholders like you, make a plan, execute a plan, respond to the factors they cannot control, and recover from failure. Be sure that they are prepared to represent you, not sit quietly or be roped into some other agenda. Tell them what you expect, ask them if they can meet your expectations, and insist that they tell you how they will do that. This, of course, requires that you are clear on the issues and what you want from a representative.

If you have clear recommendations for the next administration, share them. Equality Bahamas is still collecting responses to its survey which is guiding the development of Feminist Standards for Governance. Members of the public are invited to share their thoughts, ideas, and demands on issues related to health, education, women and LGBTQI+ people, youth, social services, environment, and labour and economy.

There is also space to share concerns and solutions on the critical areas of gender-based violence, climate change, and disaster management. You can respond to one, some, or all of the questions, responses can be any length, and there is an opportunity to join the working group that will review responses, draft the Feminist Standards for Governance, and participate in activities beyond the launch. Contribute at tiny.cc/feministsg.

I had expected something different from Alicia. Maybe I'm being unfair. I understand the point of demanding more from those offering themselves for positions of leadership, but something here is fundamentally flawed. Why in the midst of a medical emergency are we having an election? Isn't the very health and safety of our population the most paramount thing right now? How do we have a snap election when people are sick and dying with no.end in sight? How do campaigns go on with risk of expsoure? How do we hold elections in voting booths, etc. when we can not guarantee the safety to place such votes?

Why are in 2021 September 16th casting votes when people are dying like dogs in our healthcare system because our resources are strained and we have no solution to the problem? But, someone in their wisdom believed that now is the time to have an election.

We need living citizens. We need people to take care of their loved ones. We need to have hope for a better tomorrow. No one is standing up and challenging this complete insanity. We have former leaders looking for photo ops instead of showing that they give a damn about our country or our people. This is a disgrace.

When a snap election is called, it will s because the current leader feels it is an opportune time to gain or regain a majority government.

Ie and opportune time to re establish power.

This clearly shows the leaders drive to gain or regain lasting power , irregardless of any other circumstances the country faces.

Leaders who do this are obviously more interested in the power than the wellbeing of the nation.

Both leaders are decent people but they are nowhere close to being effective leaders. My kids even laugh at them when they hear them speak and ask me to translate their nonsense. SAD TIMES!!!!

One thing I can agree with is the issue with all the signage. It looks HORRIBLE. What's the point? It won't change anyone's vote and will become litter. You mean to tell me that NONE of the FNM or PLP candidates can see that all that signage is unnecessary?

Very good article, Ms. Wallace. It pretty well covers the sad state of affairs in which we find ourselves and whether we should take the time to ink our fingers to simply spoil a ballot because the options ARE horrible. As for getting candidates to commit to their stands on issues, usually the candidates honestly have no goals or sensible ideas, other than to line their pockets and to live large. Usually the MAJORITY of voters have no idea of pertinent questions to raise. I saw a man this morning sporting a red mask and asked him whether he was ready to re-elect the FNM for another term. His answer was "it was free".