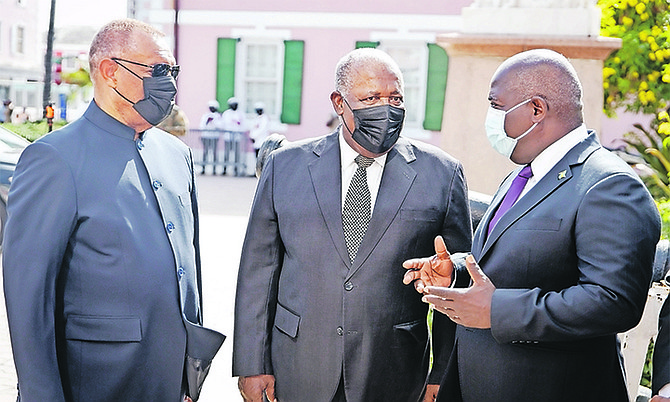 He was asked outside the House of Assembly yesterday about Prime Minister Dr Hubert Minnis’ decision to call an early election.

“I had one snap election,” he said. “I called [an] election in March of 1997, which was about five months before the end of my term, and thereafter I determined that we ought to move towards a fixed election date as far as possible and I therefore held election in 2002 in May.

“I thought the public ought to have a good idea as to when elections are gonna be held. We gave everybody an opportunity to register to vote.”

“We announced in advance, ‘listen, if you want to register to vote in this election, please register by the end of the month or by the 15th’ or whenever it was, and gave people lots of time to be able to register, transfer their votes, etc.”

Asked directly if he backs Dr Minnis’ move, he said: “I only speak for myself. My record I think speaks for itself on the issue.”

Passing legislation to ensure fixed election dates was one of Dr Minnis’ promises in the lead-up to the last election. It is unclear whether Mr Ingraham, who strongly and publicly supported the Free National Movement in 2017, will do so this time.

Mr Ingraham also said the current surge in COVID-19 cases did not have to happen.

Asked what he would have done differently, he said: “I wouldn’t answer that.”

Like Mr Ingraham, former Prime Minister Perry Christie also spoke to reporters after viewing the body of former Governor General and Deputy Prime Minister Arthur Hanna, whom he called the greatest loss in Bahamian public life since the death of Sir Lynden Pindling.

Mr Christie said he is concerned about how vitriolic politics has become. He said he was surprised Dr Minnis called an early election.

“I assumed he was trying to pre-empt the Speaker, whatever the Speaker was trying to do. I thought he was gonna try to give the country an opportunity to come to grips with the fact that he had a strong programme of vaccination and accelerate that programme over the next four or five months we would be in a better position than we are now. But prime ministers have a right to do that. He’s decided to do that. The Bahamian people have a right, the chance to say yes or no, so he’s exercised his constitutional right. I would not have at this time myself, but that is how we differ.”

He also said job creation is the key to winning an election as the incumbent party.

“In the last 20 years, no one has won a second term,” Mr Christie said. “And I, on reflection, I’ve concluded that unless someone can come in and create 80,000 jobs, they’re not gonna win an election because there’s just too many people in too many different places, particularly young people, who are out of work and have been out of work for a long time. I was a victim of it in terms of elections, Ingraham was a victim of it, I think Minnis will be the victim of that unless he beats back history, but the historical statistic of significance is that in the last 20 years, and this would be 24, no one has won a second term consecutively.”

You know Ingraham isn't saying what he really wants to say. Minnis' choice is completely ridiculous during this current surge. No advanced warning for elections!! 🤦‍♂️ I believe it will backfire on him.
Even if the FNM wins, Minnis will lose his seat.

Unfortunately that's one of those that you can basically say FNM will win easily (there are around another 3 at least, and PLP probably have a few more then that).

Normally I would agree with you, but nobody thought that Christie was going to lose Centreville in 2017 either. Killarney is drawn up to be a safe FNM seat, but I wouldn't be shocked if the turnout for the FNM was so low that Minnis joins Christie to become the second PM disgraced enough to be booted out of Parliament when losing government. Voter frustration is extremely high right now.

So the two other people who could have brought in a fixed election date when they were in power, but didn't, now say there should not be a snap election. I take it they don't like Minnis as he has never used them. Seeing as they are part of the group of 3 i blame for the situation of the last 30 years i am happy we didn't have to see them

... yep, not interested in what they have to say. They all played games with elections when they were in power and they are all responsible for this being a 4th world country! Can't believe these losers get a pension!

Ingraham's legacy is the bringing of the Communist Chinese to our shores when he had The Bahamas sign on to the CCP's One China ideology and effectively booted the real Republic of China a/k/a Taiwan out of our country.

Christie's legacy is corruption and fraud on a massive scale centred around the CCP gaining control of the Baha Mar property and developing The Pointe property. Christie now even still prefers wearing Communist Chinese-style business suits, like so many other corrupt CCP 'owned' political leaders of African nations.

These two corrupt clowns, Ingraham and Christie, are very much symbolic of all the reasons why Bahamian voters need to send an emphatic good-bye message to both the FNM party and the PLP party when they go to the polls on September 16.

The PLP party and the FNM party have had the Bahamian populace in chains for far too long while their political elite have gone about greatly enriching themselves, their family members, their financial-backers, their friends and cronies and, of course, their lovers. This is why it's so important for us to support reputable independent candidates with no close ties to either of these two most corrupt political parties.

Why did Minnis choose to govern by smoke and mirrors? When he was honest and up front and, apparently transparent in his government, Bahamian people believed in him. Many could go to bed at night and sleep peacefully knowing ‘Minnis begat did.’ And Minnis ‘gat us.’ And that is why when the pandemic came about, Minnis got more than 95% cooperation from the Bahamian people. They believed in him. They made the sacrifices and they followed his directives. So what happened? Talks of an early election, denials if it. Vaccines came about that were supposed to be voluntary but Minnis used his hand at every turn to admonish and force Bahamians bro take them. Even today a Bahamian cannot campaign unless he is fully vaccinated. But why. Why an early election in the midst of a burning pandemic? Has Minnis lost his ability to lead? Is he taking the wrong advice from the wrong people? Is he purposefully leading the Bahamas and The Bahamian people down the wrong path? Can you really trust giving him another five years of unleashed power?

Yet another coy die-hard FNM'er. LOL

The good thing about this election is there will not be a landslide victory, regardless of who wins. The FNM’s are not that fed up with Minnis to see him gone and the PLP’s who voted FNM the last time feel they fared no better under the FNM so they have gone back home to ‘a bee day’. And this Election really is about your future, like they all are are, but many will have to weigh the benefits of preserving their health as opposed to going out in a surging pandemic to vote. And if there is not a new party in power, there will definitely be new faces.

The mini hurricane tore down the huge Minnis sign by the Lakeview cemetery round about.

The frame was mangled.

Back away Papa, back away you standing too close

A pointless article and commentary, each of them did whatever the hell he wanted whenever he wanted. That the Bahamian public still gets all excited about this party or that is astounding, considering the screwing they get and the worsened condition the country is left in each time they are elected. We must like consistent abuse.

Some will look to Donald Trump as a savior in a few years as the Joe Biden continues to fumble with things such as the pandemic and pulling troops out of Afghanistan. Basically putting rule back in the hands of the Taliban and causing many to have to flee that country. Trump may get the chance to come back and finish his wall, continue his economic war with China and help rebuild the holy temple in Jerusalem. Then the anti-Christ will make his appearance anf reveal himself to the world.

No one and I mean no one with an ounce of intelligence will ever look at the sexual predator tRump as a "savior".....if there is an anti-christ it is tRump

the wall and tRump are failures....your support of tRump tells us more about you and your bigotry since we all know what a terrible human being tRump is

I thought is was D.J. Trump who signed the agreement to withdraw troops from Afghananistan? Why do you think the whole world is telling Biden that he should not "stick to" Trump deal with the Taliban and keep troops in the country? You and I know that D.J. Trump has messed up things for himself, his company and America to ever be able to "come back"!! In case you 4get. . .them 80 million Americans who "chuck" his behind out in 2020 are still there for his hip!! He will never make it back. . .EVER!!

How in the midst of a medical catastrophe are we having an election? How do Mr. Ingraham and Mr. Christie take photos and keep.their mouths closed? If there was ever a time in our history to remove a leader, to.peak out and take back our country, now is.the time. It's not time for.people to play politics. People are dying. The country is in shambles medically. This is election is a statement of arrogance and a total lack of concern for the lives of our fellow countrymen. This is a disgrace and should be stated as such. Instead of photo ops, Mr. Ingraham, Mr. Christie and Mr. Davisn should be making moves to stop this and calling for.the immediate removal of De. Minnis. This decision will go down in infamy in Bahamian history. I hope that the photos of these 3 men who stood.by and watch are etched in this dark day in our history.